Wrestling:
Strategy: Heavy weight/offensive. Jessica will hit a suplex wherever she can and will use her tremendous strength to her advantage.
Type: Prefers standard, but will do handcuffs, no DQs, all sorts of stipulations.
Preferred attacks: Jessica will use strikes to help set up more complicated throws and suplexes.
Alignment: Heel

Finishing Move: The Barnburner
Jessica tucks her opponent's head between Jessica's legs. She then grabs them around the waist, and flips them up so that their legs are on either side of her head. She then throws her opponent down from that height brutally.

Signature moves:
Cyclone Rider: Jessica will move to the side of an opponent and throw them over her shoulders. She will compress her opponent and exert pressure on her back until she submits or Jessica breaks the hold. The torture rack has made more than a handful of girls tap out. Sometimes she will squat the girl she has up there just to rub it in a bit more.

Dead Reckoning: Jessica hooks her opponent's arms behind their back. She then lifts the opponent up and slams the opponent face first into the mat.

Fujita Five: Jessica hits a delayed vertical suplex. She will often hold the victim in the air for a few seconds to show off her strength. 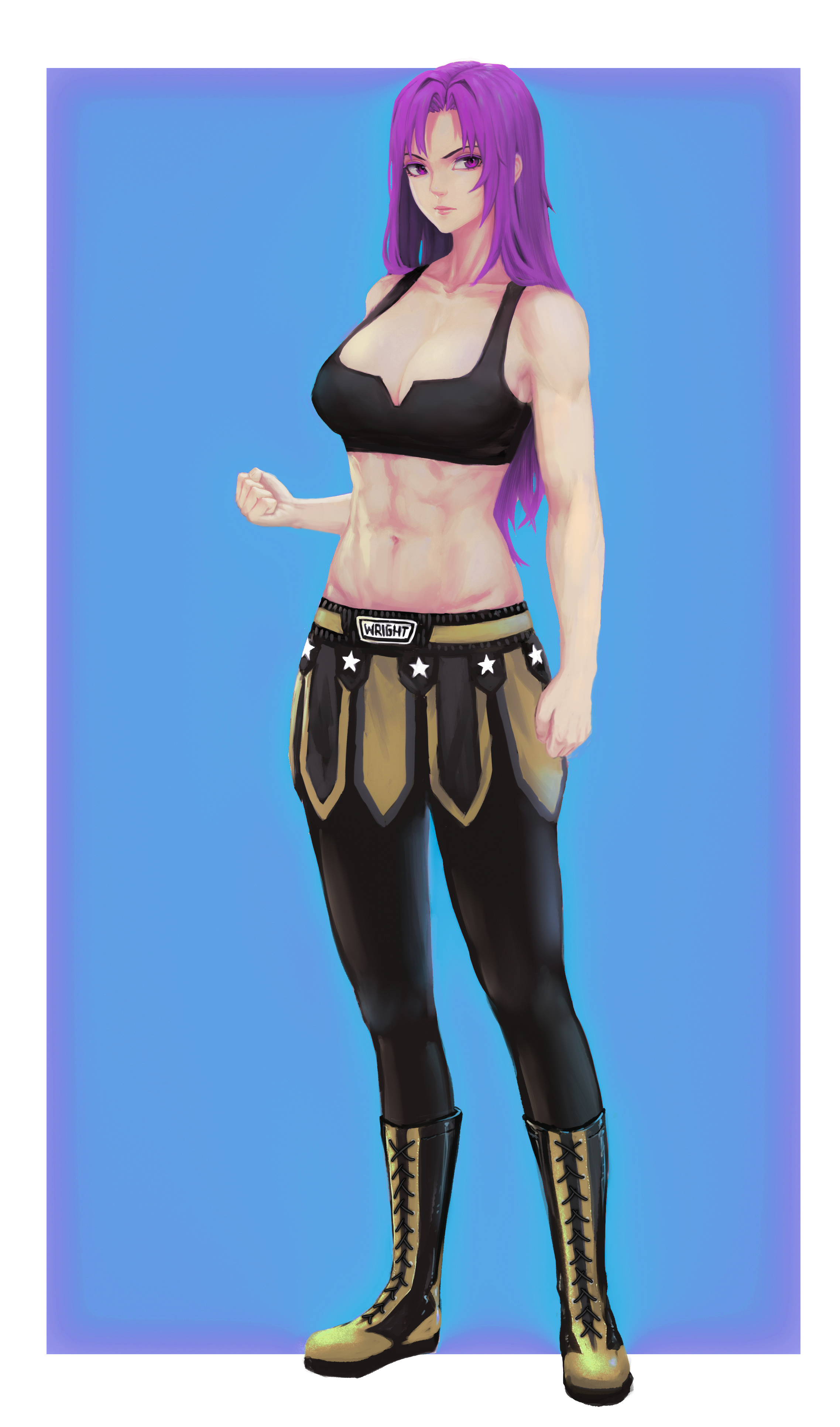 History:
Jessica was born into a wrestling family. Her father, a middling attraction in the Midwest wrestling scene,showed her the ropes to help her fend off her three brothers. She showed some promise and the family toured together throughout the country. She was 'raised' in Iowa, but is familiar with run down hotel rooms throughout the Midwest. She debuted in front of 10 people in a small gym in Iowa City where she was badly beaten. That beating, as well as the constant torment by her brothers, gave her an aversion to losing which manifests itself in a remarkable strength and an occasional proclivity to underhanded tactics. Her father failed at acquiring any belts or any real glory, as did her brothers; she feels the need to prove herself to them and gain some notoriety which brought her to AFW. She pounds girls into the dust for the same reason she wears such a skimpy outfit- because she wants the whole world to know her name.

Her mother divorced her father when Jessica was very young and her father got custody. She was raised in a very testosterone driven environment and as such Jessica isn't very traditionally feminine. She always looked down on the other girls in school, who she thought were weak. Jessica was not particularly gifted academically, nor was she dumb. She simply didn't care for it. Every day she would sit in class and wonder where she would be wrestling next. Every Friday after school her family would all pile in the van to go to some sketchy dirty arena and fight for meager pay. She thought she had found her calling and she came to LAW to prove it.

Personality:
"Listen. I am not here to make friends. I am here because I want to win, because I am going to win. I don't care if I have to finger a girl or beat her over the head with a baseball bat. There will be a belt around my waist by the time I am done."

Jessica loves to get in peoples' faces and call them on their crap. Every challenge will be answered, even when it isn't a particularly good idea. Outside of the ring, she loves mocking people. She has a tendency to stare people down to see if they will look away first. Any bar that doesn't mind a few fights will find a regular customer in Jessica. She is a mean drunk and especially belligerent after she has a few beers in her. When looking for romantic partners she looks for someone tough, whom she respects. She is very ambitious, very driven, and will try to intimidate girls. She is not afraid to bend some of the rules in the ring.  If you ever need to find her, you can usually find her at the gym. Grudges come very quickly to Jessica often for very little reason.

Jessica thinks she can take on the world.

Fun facts:
-Her purple eyes are natural, but she dyes her hair
-Personally offended by anyone suggesting they can out drink her
-She can bench 350 pounds and can squat 500
-Still learning Japanese, is not particularly skilled in the language department.

Likes:
-Country music ("Nothing wrong with a little twang as long as the lyrics aren't about goddamn tractors.")
-Going to the gym ("Don't spot me, watch me.")
-Cheap beers and gambling ("They go together so well.")

Dislikes:
-People who cheat against her ("If anyone is cheating to win, it is going to be me. Cards, wrestling, you name it.")
-Losing ("Do I look like some fucking loser to you?")
-Anyone who overlooks her ("Who wants to be the idiot who underestimates the future champion?")

Jessica vs. Lilliana, in which Jessica didn't do so hot...