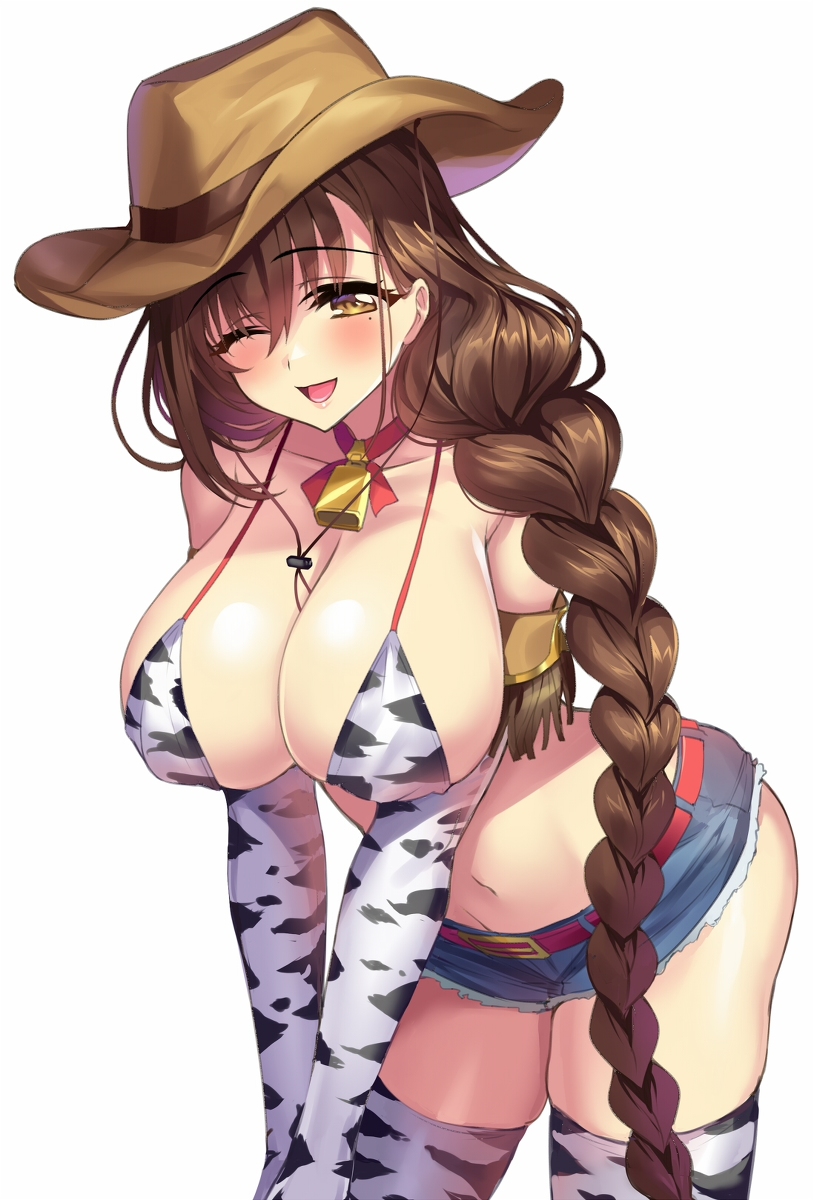 She would come out waving to the crowd, tipping her cap to them before sliding into the ring, twirling her hand in the air. She would giggle saying "If you all are wondering, I'm wearing this since I'll be riding my opponent in victory once the match is done." She would giggle "Or maybe y'all." She said in a country girl accent before heading to her corner, tossing her hat onto the ring post.
viewtopic.php?f=21&t=4764
My cuties <3

It was just a matter of time. It was no strange for anyone that knew Iria to know that she enjoyed having fun, in a lot of ways. The ring was no exception much for the Valkyrie League management's discontent, who couldn’t contain their champion. So when Iria had to decide if she wanted to be booked in LAW’s most lewd type match, it was a no-brainer for her.

Iria knew that agreeing to this kind of match spelled trouble for her, she could almost hear the complaints “A champion of our most prestiged Valkyrie league, should never take part in activities that question our company’s reputation...” Iria grinned, almost taking satisfaction antagonizing other people that told her about what she should or should not do. If she wanted to face a wrestler in the ring and pleasure her to submission, she would, and that was the end of it.
Iria waited for her opponent to make her entrance, eyeing her up as she liked what she saw, she wouldn’t have accepted the match if it were otherwise after all “Isn't she quite an adorable cow?...” She muttered to herself, her eyebrows arching slightly in amusement as Claudia made quite the bold remark “My… That’s the attitude~”

Once her music started playing, she’d make her way down the ramp. She walked with an elegant stride as her eyes would be fixated on Claudia’s, flashing her an impish smirk.

Making her way towards the ring, Iria would approach her opponent with a seductive demeanour. “Riding me in victory, you say?” -- Giggled the blonde, amused -- “Color me intrigued sweetie, but I have other plans in store for you...” Iria eyes gleamed with desire as her tongue brushed against her lower lip “... You’ll love them though”
Last edited by MsIshtar on Tue Nov 10, 2020 11:22 am, edited 2 times in total.
Iria!: viewtopic.php?f=12&t=5466
Top

Claudia would watch as the blonde girl walked down to the ring, smiling and stretching a bit. As Iria would confront her the hostess would giggle, watching as the girl approached her. She would nod to her first response, before then giggling as she let one hand run on Iria's arm "Don't threaten me with a good time sweetie, if you wanted that we can have a rematch later, in private. That way I'll have a much longer ride." She teased before the referee would finally tell the two to go to their corners.

Claudia would go for her opponent to get ready, before then attempting a lock up once the bell ring, Claudia attempting to lock up with the other girl.
viewtopic.php?f=21&t=4764
My cuties <3

Iria enjoyed her opponent’s playful demeanour, it was a nice change of pace from having a lot of people angry at her, unreasonably so, in her eyes at least. She’d just grin as Claudia caressed her hand and made her teasing.

“It’s not a threat cupcake, it’s a promise~” Replied Iria while winking at her “Perhaps, I’ll take you up on that offer after the match, if you can keep up with me~”

Iria’s alluring attitude didn’t vanish as the referee stepped in and told them to get in place. Once the bell rang, Iria approached her opponent, who seemed to want to lock up with her. Although the blonde had other plans in mind, she would raise her arms feinting a lockup, but would try to duck Claudia’s at the last second, if she had her way, she’d try to slip past her and wrap her arms around Claudia's waist before aiming to land a german suplex!
Iria!: viewtopic.php?f=12&t=5466
Top

Claudia would go forward looking for a lock up, but she would fall for the girl's trick as she grabbed her from behind, looking to lift her up. However she would plant her feet on the ground and keeping them wide so it would be hard for her to be lifted. She would instead shove her rear into the girl's lower region, wiggling it a bit to tease her, before then trying to reverse by grabbing the other girl and hitting a snapmare, followed by a headlock. If this worked she would lock in the basic submission
viewtopic.php?f=21&t=4764
My cuties <3

Iria’s ruse was successful, changing her stance on the last second, the blonde slid past Claudia, her arms would get a firm hold around her torso -- “Got you now~” Whispered the blonde in her opponent’s ear, as she was about to slam her with a german suplex!

But noticing her resistance, the blonde was about to change her course of action when… At that moment, she felt her opponent grinding her butt against her covered crotch! -- “My… Aren’t we feisty?” -- Cooed Iria, feeling the wiggling stirring a faint warm feeling in her body, not being aware of Claudia’s arms grabbing her for a counter-attack!

“Mmmh?... Guuuh!” Iria gasped as she was flipped and slammed down to the mat butt first with the snapmare. Her opponent wouldn’t let her get away as she’d lock her tight in a headlock!

Claudia would giggle "Not bad yourself~. Let's hope you don't get too distracted now~" She would tease as she squeezed the girl's head tight, letting her chest rub on her upper head. She would bite her lip as she slowly attempted to lift the girl back to her feet, followed by trying to toss her into the corner.

If this worked then she would attempt to follow this up by preforming a front handspring, leading into a lariat as a bit of a athletic flashy move. If it connected then she would step a few feet back, smirking as she thought of an idea for the next move "Might time to go for a test ride.~" She teased going to the corner and grabbing her cowgirl hat
viewtopic.php?f=21&t=4764
My cuties <3

Iria found herself steadily rising up as Claudia still had her locked securely in the headlock, but soon enough, her opponent released her. Still having a hold on her, Claudia threw her towards the corner, “Mmmpf!” the blonde mumbled in pain as she crashed against the turnbuckle back first. From there, Claudia lunged towards her as she did some acrobatics, executing a front handspring before striking the blonde’s chest with a lariat!

“Gah!” Yelped Iria as she reeled from the blow, tumbling down on the turnbuckle on a seated position as her hands took a hold of the ropes! The crowd cheered on, admiring the brunette’s showy move, getting louder as Claudia put on her cowgirl hat, anticipating what was about to happen! Iria herself had an idea of what her opponent would be up to, but instead of planning for a counter, she decided to lay still and take the move head on, intending to make the crowd go wild!
Iria!: viewtopic.php?f=12&t=5466
Top

It was far too obvious what was happening next, as the crowd was already whistling and cheering as Claudia simply giggles "So easily amused, aren't they?" She would spin, adjusting her bottoms, before then racing into the corner, jumping and hitting a classic bronco buster!

"Wooooooo!!" Claudia cried out as she grabbed her hat waving it around in a circle over her head while the other held onto the ropes, the hostess giving Iria a ride of a lifetime and the crowd was loving it, cheering her on! She would continue to bounce up and down on Iria before eventually calming down, switching to smothering her for a moment under her butt and rear, grinding on her trapped foe "Are you enjoying the ride dear? She asked in a teasing manner with only the girl's eyes being visible over the girl's groin
viewtopic.php?f=21&t=4764
My cuties <3

Iria saw it coming from miles what was coming to her, It was really hard to miss though. But she wouldn’t move as Claudia charged towards her, spreading her legs as she landed a bronco buster! Iria laid out there, squirming her body each time her opponent bounced up and down her crotch onto her features, giving her full ride as their public roared loudly! After some moments passed, Claudia shifted her position engulfing her nose and mouth under her rear as she grinded herself on her face!

“Mmmmph...” Iria muffled a sound as she was smothered, her cheeks slightly blushing from the lack of air. While the blonde heard her reply it wasn’t like she could reply at all! Although… looking up at Claudia she arched one of her eyebrows, like saying “Is that all?” - if someone could still look smug after receiving such an humiliating move, that’d be her that’s for sure!
Iria!: viewtopic.php?f=12&t=5466
Top
Post Reply
25 posts