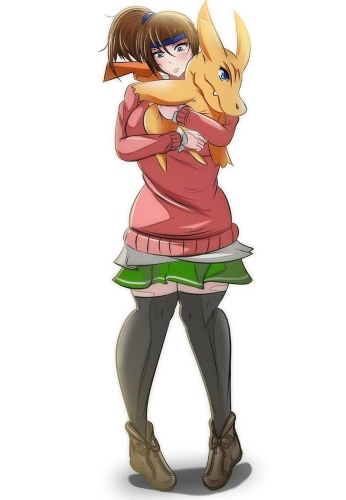 Backstage near her still beat up looking locker room, Widow has been not medically clear to perform tonight due to the beating she took from the brawl with Anita a week ago even saying that she may have cracked a rib or something from how hard she was thrown into the wall. But she is fine now and grabs the microphone as the cameras are rolling to hear her speak what on her mind.

"So lately I been told that I been making to many waves in LAW, that I been making enemies left and right even calling out people by name. The favorites are people saying that I'm to old or having a mid life problem shit like that, my response to that is drop dead. All the bitches in this company do a lot of barking but no action that the problem their all used to sitting back and watching but then act shock and talk when someone goes out and do it." she say's facing the camera and turning her back to the hall way. "Like I said before I have nothing against that little idiot who running around calling herself the Ace... My issue with her is having the nerve to think she better then me. So for her to beat that has been Alaina and then the nerve of that little bitch to run around bragging but having to kick the ref to win. The difference between you and me you little runt is this. You play pretend to act like the hot little thing in this company but to me your still that little runt who couldn't handle it as a face and kept getting your ass kicked, stay in your lane next time or I make sure you won't get another victory."

Taking a moment waiting for the crowd to be quiet before speaking again. " This is why I decided to put a bounty on each lightweight little head, $2,000 for taking out any lightweight it can be in the ring, backstage, even in the parking lot it doesn't matter where at all. If Rose Gold thinks she going to rule over her little lightweights well I make sure to leave their broken bodies for her to see." laughing at the response the people have telling them about the high reward and such. "Astrid may have beaten me. Anita may have broke a rib but the difference is I'm still here still standing, I will win the Heavyweight Title either if Astrid is the champion or not I will Rule. So enjoy your little reign and fun because when I'm champion there be no need for little runts in my Kingdom."

Saying that threat before tossing the mic away, saying her piece before she turns to head inside her locker room to collect her bag's and leave the arena.
.
viewtopic.php?f=21&t=5874
Top
Post Reply
1 post • Page 1 of 1