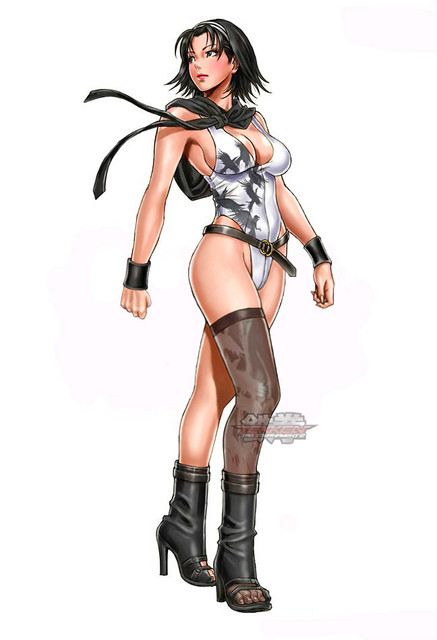 Tina got her fifth fight in a very short time. Preparing to fight in the locker room, Tina tied her wrestling boots. She was dressed, as usual, in a one-piece tight swimsuit with white and blue stripes emphasizing her muscular figure. After the last trainings she felt really, very good. Her sports form was excellent. When she got up she made a few jumps, wanting to check that the shoes were well stretched and fit. Then she decided to stretch left and right several times and decided to do a few push-ups. She was happy. For a second Tina's face became nervous, as she remembered her losing the fight against Joana Tojo. The nervousness quickly passed. Finally the moment came ... Time to go out to the ring. She heard the music: "Just Close Your Eyes"
Tina put on a black sweatshirt and ran down the hall toward the ring. Along the way, she saw several fans reaching out to her. Running, she touched those hands, greeting her supporters. The audience cheered. Tina was slowly becoming a wrestler more and more recognized by the audience. When Tina reached the ring, she decided to slip under the bottom rope and then intended to run through the center of the ring and headed to the corner, went to the corner waving her hand, greeting the audience, then took off her sweatshirt and twisted it several times and threw it towards the audience. Then she decided to jump off the corner and head to the center of the ring. She decided to make a perfect split and flex her biceps wanting to show how athletic and muscular she is. It was a standard element of her program, which she tried to repeat every time she appeared in the ring.
At that moment, she heard the announcer introduce her: "... weighing 195 lbs and having 6.1" Tina Meyer ... "
Then Tina was going to wave to the audience and head to the corner to wait for her opponent to arrive.
Tina Meyer
Top

It had been a while since the last time Jun Saejima had her match, and tonight, she planned to get herself a victory in the ring. Already clad in her wrestling outfit, she would wait for her entrance, and as she was given her cue, she would then make her way to the ramp, receiving a modest pop from the crowd. Keeping a rather dispassionate look, she would walk down the ramp as she was introduced by the announcer. 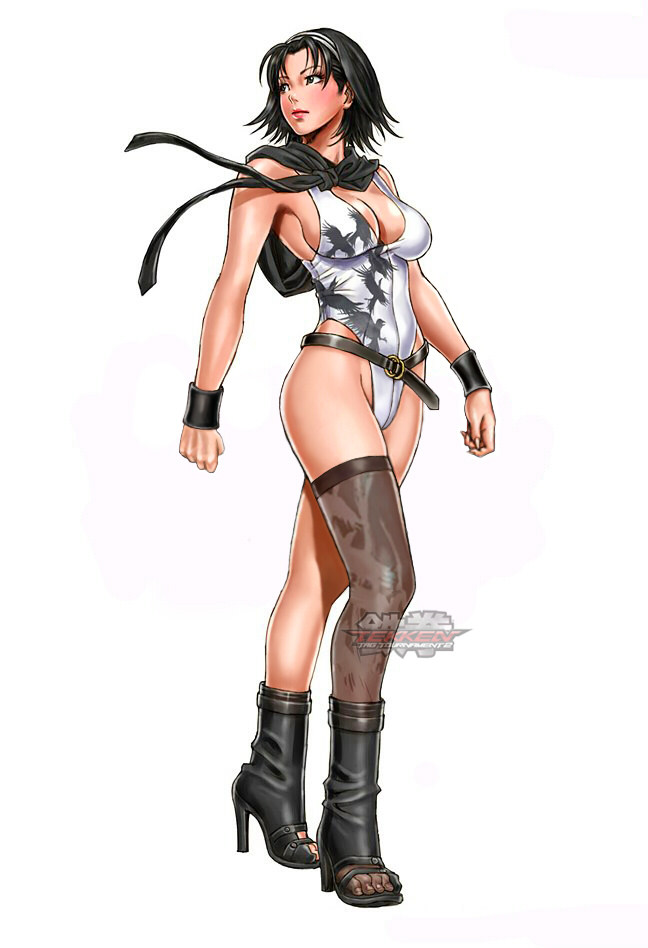 After walking down the ramp, Jun arrived at the ring. She would climb up the apron to enter the ring before she took a good look at her opponent. It looked like her opponent for tonight, Tina Meyer, was bigger than her in terms of size, but she decided that this would be a good challenge for her. Finding no reason to be rude, Jun would give her opponent a slight bow, showing an aura of professionalism and sportsmanship at the start of the match.
PrinceArjuna's Roster
Top

While waiting for her opponent, Tina stretched in her corner, preparing for battle. Finally her opponent appeared in the distance. Tina tried to watch Jun closely all the time. Her every move and expression. She noticed that her opponent is a very pretty and impressive girl. Jun was not muscular, but she certainly liked the silhouette of her opponent.

As the opponent entered the ring, Tina gave her a gentle smile. Tina knew her opponent was lighter and not as tall as she was, so she thought proudly that the fight would not be long and the German wrestler would win. Both wrestlers were standing in their corners. Tina, seeing how Jun made a gentle bow, did not want to be in debt and also bowed towards her opponent. The German wrestler, standing in the corner, watched his opponent and wondered what tactics to use to defeat Jun.

When the bell rings, the wrestlers will turn to the center of the ring. When Tina is in the middle of the ring, he will reach out to his opponent to say hello and then intend to say with a smile: "That's what - we start. We'll see how strong you are ... "and he will stretch his arms toward her to try the strength test. Tina wanted to test her opponent in this first clash and maybe even humiliate her by showing her power by pushing her to the ropes.
Tina Meyer
Top

Jun would wait until the start of the match, and when the match was underway, she would go forward and prepare herself to lock up with Tina. Seeing that her opponent had extended out her arms, she would also do the same, preparing herself to grapple with her. Then, she would step forward, locking up with Tina, though she knew that she would be overwhelmed if she tried to match her with her physical strength.

Tina noticed that her opponent gladly accepted the challenge, as he reached out and seemed to be struggling with Tina. Tina felt very confident and with a smile on her face decided to press on the opponent, wanting to show her power. The German wrestler did not come across too much resistance from Jun and did not expect trickery. Tina pressing her opponent unexpectedly felt that Jun stuck out her leg and doing a leg sweep wanted to knock down a German wrestler. Tina staggered and as if she began to lose her balance, at this point she decides to let go of her opponent, because remaining in this position could cause Tina to land on the mat.

The German wrestler only smiled and thought "... she's smart, but you won't knock me down on the mat ..." Tina will try to circle her opponent several times and if it succeeds, Tina will try to reach out to Jun again, wanting to grab her and struggle, initially as on the strength test, but she planned to close Jun's head in side headlock.
Tina Meyer
Top

Jun tried to bring Tina down, but her opponent was clever that she broke off from the lock up, preventing herself from being brought down to the mat. Quickly regaining her footing, the martial artist looked at her opponent, planning her next move. Brushing aside some stray strands of hair off her forehead, Jun would prepare herself to lock up with her opponent again, and when Tina moved forward for another lock up, she would also do the same.

But then, this time she wasn't so lucky as the last time as she ended up being grabbed by Tina, who then proceeded to place her into a side headlock. Jun could feel herself bending over as her head was trapped under Tina's arm, but she wouldn't panic from this, being someone who could keep her calm. But for the time being, she would try to maintain a solid footing first as she would place her hands on Tina's hips, waiting for the right moment to perform her next action.
PrinceArjuna's Roster
Top

Tina's plan succeeded. After a German wrestler reached out to Jun to grab her and struggle, Jun's head was placed in the side headlock.
Tina felt satisfaction and could show how strong her embrace was.
Tina will try to press Jun's head tightly against her chest several times. She was going to slowly weaken her opponent and make him lose his will to continue fighting and would have difficulty breathing and would be breathless.

Tina felt her opponent put his hands on her hips. At this point, Tina will try to make another move. If successful, the German wrestler firmly holding Jun's head will pull her up, because she wanted to lift her opponent all the time holding her head in such a way that Jun would roll over and land on the mat on her back. Tina was going to keep her lateral headlock all the time. If that works, Tina will press Jun's head harder and harder, while her opponent will be lying on the mat.
Tina Meyer
Top

Placing her hands on Tina's hips, Jun tried to maintain a solid footing for herself as she tried to figure out what to do next, but then, her opponent decided to bring her down instead, disrupting whatever plan the martial artist was having. Jun ended up lying on her back while her head was still trapped in the headlock. She knew that she needed to do something in order to prevent something much worse from happening.

So, Jun would try to get her own feet flat on the mat before bridging her own body up. From there, she would try to twist herself out of the headlock before pulling herself away from Tina, releasing herself from the headlock.
PrinceArjuna's Roster
Top

Tina, having her opponent on the mat, tried with the greatest force to tighten Jun's head in the side headlock. However, Jun put her feet firmly on the mat and then with the help of clever twisting she managed to pull her head out of captivity. Tina looked maliciously at her opponent as it ruined her further ability to implement the plan. She felt disgusted and dissatisfied with this situation.

Thanks to her quick-thinking, Jun managed to get out of the headlock, freeing herself. Then, she would focus on getting back up so that she could get herself moving and fighting back. Still, as soon as she was on her feet, Tina was already upon her again, and she went to deliver a kick right into her belly, causing the Japanese martial artist to gasp.

Winded from the kick, Jun was unable to stop Tina from grabbing her arm and twisting it, leaving her unable to do anything. Still, Jun wouldn't allow herself to lose her wit, at least not yet as she would try to go with the flow as her arm was being twisted before she attempted to untwist it, hoping that she could get herself out before Tina could try something else.
PrinceArjuna's Roster
Top
Post Reply
19 posts