"The Hitwoman" Roni Mancini steps out onto the screen as Black Vultures by Halestorm and on the final yell of "Black Vultures circle in the SKY," Roni stomps and roars, giving the crowd a menacing look right after. After which, Roni grins broadly and then swaggers her way down to the ring. At one point she stops and looks over to a fan trying to take a picture, takes his phone, then casually drops it on the ground and stomps her boot on it before resuming her walk down the ring.

Eventually, Roni gets to the apron and then slides underneath it as the crowd boos her. Maintaining her immense unpopularity, Mancini arrogantly poses with her arms out, doing a lap around the ring. The badass brawler was happy to bathe in her boos. Her eyes then went to one of the corners, where a pair of handcuffs dangled off the top of one of the ropes, one end closed around it, but with a key inside for easy removal. The idea of this match was something that made the Italian excited. She got to pound the everloving hell out of some chick, cuff her, and then continue her beatdown. Was there anything more exciting than that? After Roni had gotten her fix of boos, she moved herself to her corner and waited for her opponent to come down to the ring.

Jessica was acclimated to doing all different types of matches. Most of the time, that meant hardcore. The fans wanted blood, and Jessica was more than happy to give them another woman's suffering. Hentai matches were not for her, not in the slightest, but she didn't mind humiliating some other woman until she gave up. And now, she was going to have to handcuff some woman in order to win this match. Jessica shrugged at herself in the locker room mirror. The Violent Violet had handcuffed women before, and had usually degraded them quite a bit afterwards. It was a lot of fun to do so, she thought, so she relished the opportunity to do it again.

Jessica made her way to the staging area. The Violent Violet had warmed herself up, and limbered herself up. She would not tolerate anything less than the best from herself tonight, especially with so much on the line. Jessica would not tolerate being handcuffed, not in front of this crowd. This other woman would have to damn near kill her. 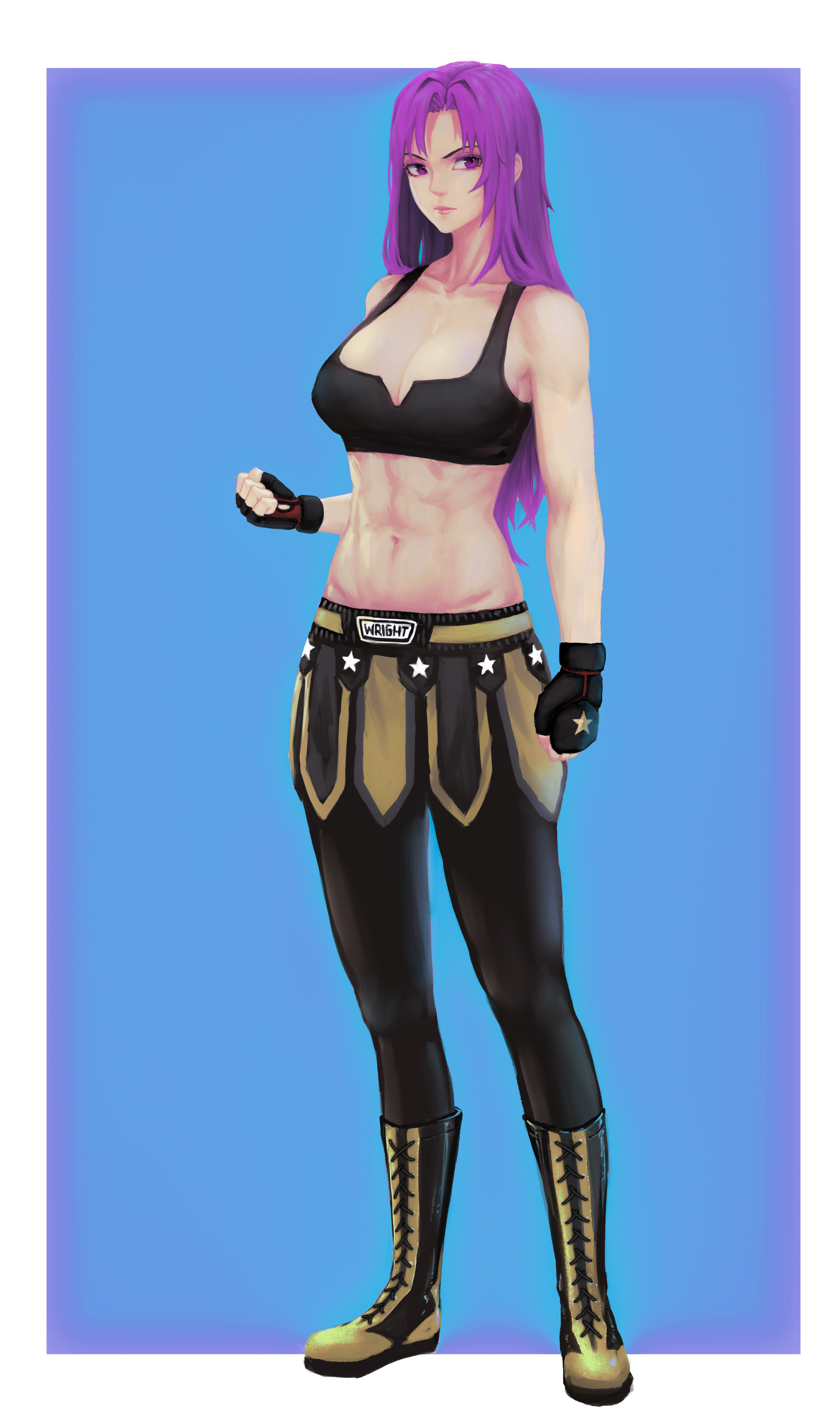 Jessica emerged at the top of the ramp. She flipped off the crowd as she walked down to the ring, eyeing her opponent the whole time. She looked tough, but Jessica felt tougher. The Violent Violet slipped under the bottom rope and stood near the middle of the ring.

"You ready to die tonight?" Jessica taunted.
My Ladies
Top

Roni Mancini idly watched as Jessica Wright came down to the ring, grinning arrogantly as the fellow purple-haired girl thought of herself as something of a badass too. Most women would probably be a little afraid of Wright's display or her candor, but The Hitwoman was only entertained by it. She's faced off against plenty of legitimate badass and more than considered herself one. But this girl?

She just asked her if she was ready to die. And Roni Mancini immediately began to laugh uproariously. "Am I ready to die? I hope that is supposed to intimidate me, because if it's supposed to make you look like some kind of badass, I feel sorry for you," said the Italian before laughing again, stepping forward to face Jessica Wright in the middle of the ring, a huge smile on her face. "Not sorry enough to give you a thorough ass beating... but hey. Maybe you'll pick up on what an ass kicker really looks like by the end." A cocky smile stayed etched on Roni's face as she was mere inches from her opponent, not showing any sign of fear.
Dubski's Lovelies
Top

Jessica didn't really like not being taken seriously. As a skinny little girl in the dingy gyms of Iowa, she faced off against a lot of thirty year old women who threw her all around the ring as they taunted little Jessica. She didn't win many of her first few matches, but soon she got big and strong and she was the one showing others just who was worth mocking. The Violent Violet did not react in the slightest to the fact that Roni was laughing at her. Time and experience had hardened her disposition.

"If you don't wipe that stupid fucking grin off your face, fine. I will more than wipe it off for you. And when I handcuff you, I am going to make you scream my name." Jessica's dark tones was a perfect foil to Roni's casual laugh. The fury with which she spoke could not be denied, nor would Jessica particularly feel that inclination.

She intended to show that with more than just words when the bell went off. Jessica took a step back to give herself some space, and then sent a rocket of a straight right towards Roni's face. It was pretty, she thought. It would be a little less pretty when Jessica was done with it if she had her way.
My Ladies
Top

Roni Mancini continued to stare at Jessica Wright as she spoke, a wide grin on her face as she heard the tough words from her opponent. She's heard them all before, and they didn't intimidate her anymore now than they had before. She began to laugh when Jessica stopped talking and then said, "Oh, I would love to see you try, you--"

A fist had nailed her right in the face, and that was all it took to take Roni out of her stupor, and immediately she began to trade blows with her opponent, firing back with right hand of her own! "You sucker punching little brat!" yelled the Hitwoman as she began to throw punches at Jessica! She looked irate and did not appreciate being sucker punched--only partially because she would have definitely done it if she had the chance first.
Dubski's Lovelies
Top

Jessica felt the sensation of her fist hitting Roni's face, and greatly enjoyed it. She hated smack talkers, as much as shit as she talked herself. Roni would not be quiet for long, however, as she insulted Jessica and launched a few punches of her own. The first one tagged Jessica pretty hard, she thought, and she stumbled a bit before she found her sea legs. Roni hit awfully hard, she thought, and if she took a few more blows like that she might not have free use of her hands for the evening.

"Fuck you!" The response was a simple one. As much Jessica would have enjoyed launching a series of punches that knocked Roni out, she knew that was not a long term viable option. She ducked down to avoid some blows, but more importantly, to get herself the leverage she needed to go for a double leg takedown and bring the Italian woman down to the mat.
My Ladies
Top

The blows were exchanged and neither girl seemed to back down at all as they both tried to duck and dodge when appropriate and caught each other with a few blows. The crowd loved this fast paced and hard hitting start as neither girl was willing to give the other an inch! And then suddenly, Roni Mancini felt her legs come out from under her and Jessica was on top of her, waylaying her with more punches!

Roni began to block a few blows and got hit by one or two before she managed to push Jessica off of her enough to slowly inch her way towards the ropes and then slid under them, scowling as she put a hand to her face and walked away on the outside. She was not happy with having to exchange blows like this with some mouthy bitch. And it only served to make her even more angry as she was taking her time to recover.
Dubski's Lovelies
Top

Jessica kept pushing and pushing until Roni was out of the ring. Sure, she tasted a few blows herself as Roni made her pay for every last inch of mat that she had shunted Roni across, but sure enough, the Italian beauty was out of the ring, and Jessica was inside it. She took a step back and wiped some of the spit from her mouth. Jessica's head was still ringing a bit from all of the blows that she had taken. This was going to be a very long match, or a very short one.

But she was going to be a gigantic asshole the whole time. "You can run, bitch, for a while. But we both know you are going to end up right back in this ring where I can come and kick your ass. I am going to grab your titties once I cuff you, just for that." Jessica's threat came with a lot of intent.
My Ladies
Top

Roni scowled at Jessica as she paced the perimeter of the ring, wiping at her mouth as she did so. "Hey, you keep on talking, because I was going to grab your titties just because I could. I don't even need to cuff you for that," spat the Italian viciously before moving to the ropes, grabbing onto the bottom one.

She would then hop onto the apron... and then drop right back down, getting a loud boo from the crowd as she backed up, arms out and a cocky grin on her face. "Just remember, you're on my time here. And I'm in control!" Mancini laughed at herself, pleased with her taunting of her fellow purple-haired competitor.
Dubski's Lovelies
Top

Jessica prowled around the inside of the ring, mirroring Roni's movements. The Violent Violet had the high ground, and thus had the superior position when it came to the matter of attacking and defending. Still, Jessica reckoned that Roni was a wily one, and did not want to get too close lest she fall into a trap of some sort. Her purple eyes traced Roni's steps.

"You aren't in control of shit. Hell, you aren't even brave enough to step into the ring with me. Are you afraid that I am going to cuff you in less than a minute?" Jessica spread her arms wide. She wanted this match to be on her terms. "And just for that, I am going to grab your ass too. That is just for me."
My Ladies
Top
Post Reply
34 posts