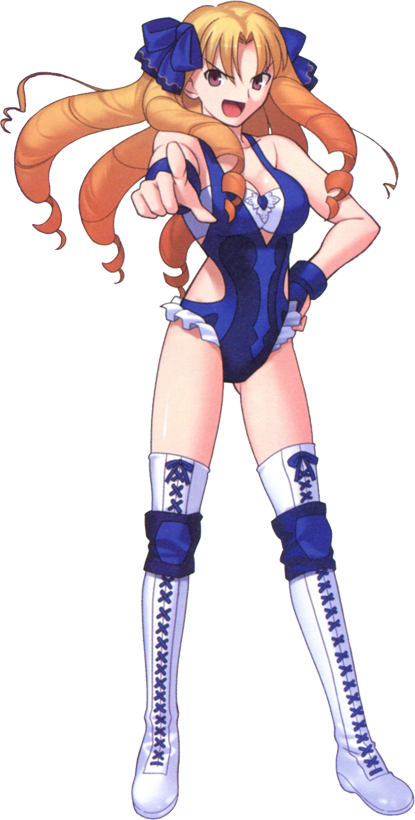 Luviagelita had managed to get her chance at a rematch, a chance to take on her debut opponent Regina Ravenwood who had started off her career here in LAW with a defeat, the nasty redheaded aristocrat who had used underhanded tactics in order the claim that victory. However, the blonde wouldn't rest until she got revenge for that. Thankfully she didn't need to do much in order to rile Regina up into giving her a rematch and a chance to redeem herself. Great Luvia stepped out onto the top of the ramp as her music started to play. The Finnish noble lady having managed to garner quite a bit of fanfare so far in LAW and that made it so that when she stepped out to greet the fans they screamed out in cheers for her.

Great Luvia would stand confidently at the top of the ramp as her music played, shortly enough she made her way down the ramp and headed to the squared circle. She climbed the steps and then walked up on the apron and then slipped into the ring through the ropes. Luvia would strike a confident pose in the center of the ring as she looked out towards the ramp....nodding her head as she turned and then headed off towards her corner.

All she had to do now was to wait...Regina wouldn't be an easy opponent, in their previous encounter they had been able to match one another move for more...so she would have to play this match as seriously as she could. Leaning against the turnbuckle, Luvia would await Regina's arrival.
D.D.D
Top

Regina was just chancing into her wrestling attire as she decided to wear her white one piece that allowed her to show her fans.As for the rest she wore white leggings that would cover up her skin until her knees , and a pair of long white gloves and white boots as she watched the reflection in the mirror with a smirk on her face. After pulling some stray hairs from her face the redhead would leave the locker room , and start to walk towards the backstage area as she was set to face Luvia for an second time.

As her calm and arrogant demure was an act as she was furious about her upcoming match. As she should not have to face that blond bitch again as the Edelfelt should have just accepted her defeat with the grace. Still that had not happened , and after an brawl backstage she had to agree to face the other wrestler again , and this time she was going to make sure that Luvia was not going to walk out of the ring on her own strength.

Regina was in time as she had planned it so she would not have to be in the same room as the blond bitch until the meet in the ring. As she would have to wait an few minutes when her music would play as "World is Mine by Hatsune Miku'' was coming out of the speakers as the English native walked onto the entrance stage with a cocky smirk on her face. So as the Voice of the ring announcer was heard as she said ''Now entering from London, England weighing in at around 135ibs .It Regina Ravenwood'' just as she got inside of the ring.

After she got in the ring she would step towards Luvia as she whispered''your going to regret making me face you as I am going to destroy you Luvia''as she made it seem she was going to approach her fellow noble as if their was no conflict between them at the moment. When if she could have gotten away with it she would have gleefully beaten her into an pulp before the bell had even rang.

Great Luvia watched the ramp as she saw Regina make her way down the ramp, that music of hers playing...the same music that Luviagelita had heard when she had been defeated in her debut match, losing by a cheap shot and then being brought down through the table. Luvia couldn't help but be frustrated, pissed off....but also elated that she was able to face off against Regina again and reclaim her honor. When the redhead entered the ring the blond would move forward and out of her corner.

Seeing Regina head up towards her as if nothing was wrong, Luviagelita did the exact same time. Once they were both in the center of the ring, Luvia would push her large breasts up against Regina's impressive pair. She would stare Regina down as she stood pressed up against her rival. " The only one who is getting destroyed tonight is you, Miss Ravenwood." Luviagelita spoke back to her rival.

The referee would quickly move in and seek the separate the two of them so that she could start the match.
D.D.D
Top

The crowd would be fooled once more that the noble ladies seem to be showing good sportsmanship , but the referee knew that was not the case. Since she could see the look that Regina would give the blond as she pressed her breasts against the redhead's own as neither pair was giving in so far as she reached forward to pull Luvia in closer. Making those idiot fans think she was hugging the bitch as she whispered ''keep thinking that as it will make my victory all that sweeter. As you just aren't on my level. Then again you should be used to that since your just an mere Edelfelt while I'm part of the much more Prestige Family of Ravenwood''
Anime-hentaifighter present the female wrestling talent

The two buxom women stood and pressed their frames together as soon enough the arms of Regina wrapped around her body. Luvia didn't know what game Regina was playing at, but she would return the favor, wrapping her own arms around Regina's as their large breasts pressed together. Hearing Regina's words though the blonde would simply scoff.

" You're nothing but a fool and a cur, Regina. If you think you are better then me, then i will make sure to show you just how wrong you are. As it stands, an Edeltfelt will always be superior than a Ravenwood and I shall prove that tonight." Luviagelita let out as she would then feel the hand of the referee on her shoulder and she would see her trying to separate the two of them. Looking to get this match started. Great Luvia wouldn't struggle, backing up as she was eager to get this match started.

After they were apart, the bell would ring and Luvia would raise her arms and inch forward. " I think we can show everyone who is superior right away, by proving which one of us is physically superior." Luvia let out as she would move forward and offer a lock up to Regina. All the while glaring daggers at her redheaded nemesis.
Last edited by Jalter on Tue Oct 08, 2019 1:14 am, edited 1 time in total.
D.D.D
Top

Neither woman was backing down as the fans thought they were sharing an hug as the redhead just smirked confidently as she waited to hear what the other wrestler would say in response. However she soon wished she had just attacked as the blond called her an fool and an cur for thinking she was better then her. She even had the gall to say that an Edelfelt would always be superior to an Ravenwood as that insult would not stand.

As she was about to reply back when the referee would get them to separate them as the bell would ring not soon after. Causing her to assume an defensive stance as she circled around the blond as she reply back ''we don't have to show them anything. As these fans already know I am psychically superior to you since I already kicked your ass last time Luvia''
Anime-hentaifighter present the female wrestling talent

Luviagelita would back off as the referee asked and began to circle Regina Ravenwood, dropped into her grappling stance and ready to square off against her rival. Luvia would offer that lock up by it seemed as if Regina wasn't willing to accept it. Thinking she already had proven herself as the physically superior between the two of them. Still, Great Luvia hadn't expected that a lock up would be accepted.

Instead she would try and move forward as if she was going to try and force that point, but at the last moment she would abandon that idea and drop down low! Trying to snag her arms around Regina's legs and try and pull them out right from under the redhead! Aiming to send her flat on her back with those legs of her's trapped underneath Great Luvia's armpits. If all went smoothly and she caught Regina off guard, she would try and turn her rival over and attempt to lock in a Boston Crab on Regina!
D.D.D
Top

With the referee had called for the bell the redhead would begin to circle around the blond as she waited for the moment when the Edelfelt would foolishly offer to lock up. As Regina had planned to make it seem she would accept , but when Luvia got close would lash out with an knee to her gut to cause her fellow noble to bend forward.

However rather then her surprising the other wrestler it was Luvia who would surprise her by dropping down low. As she would take down the British woman with an takedown , and grab onto her legs as she would soon be caught in an Boston Crab as she cried out in pain as she tried to crawl towards the ropes.
Anime-hentaifighter present the female wrestling talent

Luviagelita was able to catch Regina by surprise as she dropped low and took a hold of those legs of the redhead, taking her down onto the canvas and then with a swift movement she rolled Regina onto her back and dropped onto her and placed her in a Boston Crab hold, finding a good place to park her rear on the back of Regina she quickly went to work.

She could already feel Regina pull and crawl them towards the ropes. With the two in the center it was a bit to get there, but they were both fresh so Regina wouldn't have too much of a hard time dragging them over there. However, Luvia would try and keep a look out, looking over her shoulder. When Regina was almost within reach of the ropes, she'd stand up and try and walk with Regina to the center again, trying to drag her back if she could and reapply the Boston Crab.
D.D.D
Top

Because of the blond's dirty trick it was the redhead who had bin taken down as the result of an knee to her gut , and then taking her down as she would quickly end up in trouble. As she was placed into an Boston crab within minute or two after the bell had bin rang. Still it was not over yet as Regina had begun to crawl towards the ropes as she reached out to grasp them with her hand.

However just as her fingers touched the ropes did Luvia drag her back to the center as she would attempt to roll herself onto her back as she tried to pull the blond closer as she pulled her legs back , and then thrust them outwards to get her opponent to fall down.
Anime-hentaifighter present the female wrestling talent