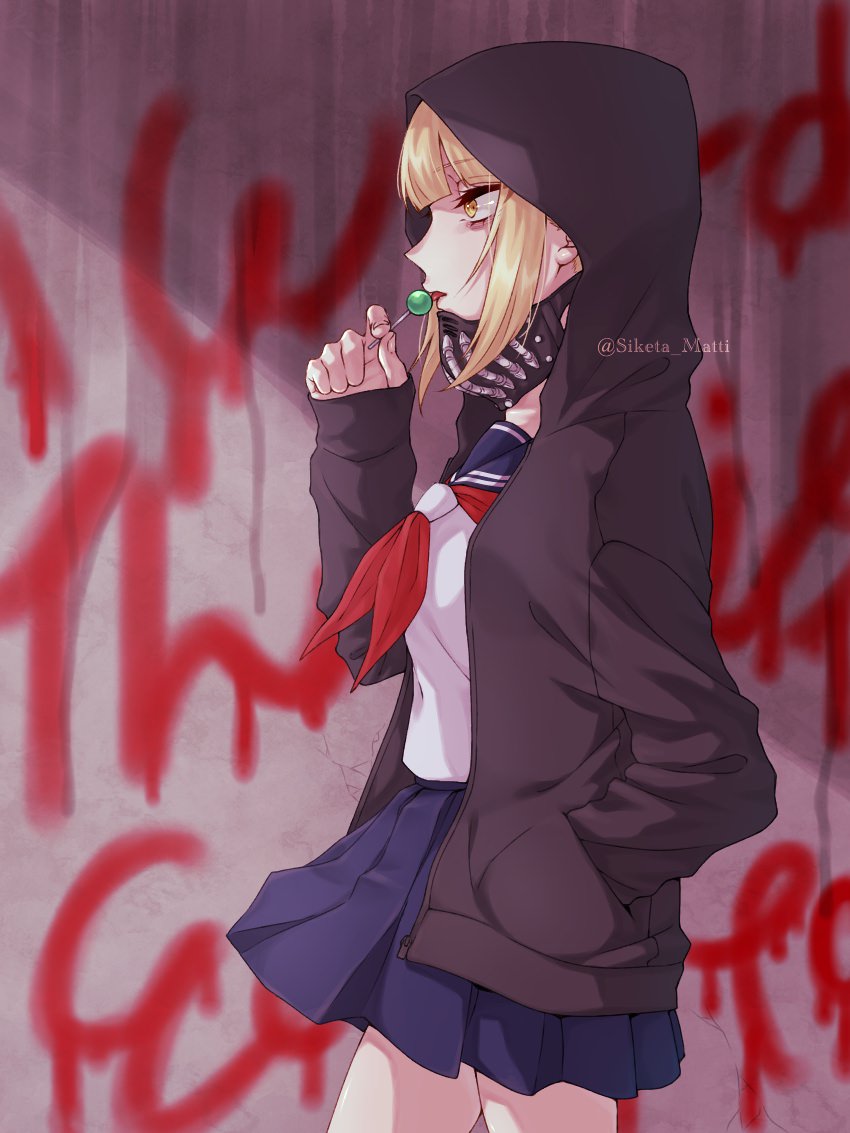 Entrance music: Fighting Strategy
Himiko is mostly out for blood or at least pain. She also isn't stupid like some people might think. Himiko knows where to hit one to inflict pain. So she tries to hit vulnerable places like the head of her opponent or maybe even their crotch or breast. The Swedish woman tries to put so much pain on her victims until they just want to surrender.

Himiko's backbreaker
Himiko gets her opponent down on the canvas. The blond then attempts to turn them on their stomach when they aren't already laying on it. Then Himiko leans forward and grabs a hold of her opponent's legs with both her hands. She will pull them towards her body and then wrap her right or left arm around them so that Himiko can get them under control quite good. The blond woman then bends her opponent with the help of her legs into her direction and increasing the pain on her back.

Painful Pleasure
Himiko gets behind her opponent. She will lay on her side and put her own leg over one of her foe's legs. The blond then put on of her arms on the inside of the other legs her enemy has and then pull them apart from each other with her leg and hand. This will spread the legs from her opponent apart of each other enough so that Himiko can now start to pleasure the person she is fighting against with her hand rubbing over her clit and at the same time put her through a lot of pain by pulling her legs apart.

Attitude towards hentai:"I won't be the one who is crying afterward. Hehe. So I will accept."

Endurance: 3/5 - Himiko's endurance is kinda high mostly because of her build and size. She also needs it because her speed takes a lot of endurance.
Strength: 2/5 - Her strength is below average and the only thing she can do with it is maybe lifting up opponent's that are lighter than her.
Speed: 5/5 - Himiko is a small speedster and uses it perfectly to gain the upper hand in a fight.
Defense: 2,5/5 - She can take a few punches and all but hits her limit quite fast compared to others.
Technique: 4/5 - Himiko is quite skilled to put her opponent's in dangerous holds.

Strikes: 2,5/5 - Her strikes aren't something to be afraid of. On the blank body they don't hurt so much and because of that Himiko tries to attack places on her opponent's body that are painful.
Submissions: 3/5 - Her technique is high which allows Himiko to apply the good hold. Sadly because her strength is not so high it is easier for stronger opponents to escape certain holds.
Powerhouse: 2/5 - Himiko's strength is low so it is just natural that most of her attacks don't base on brute force.
Aerial: 4/5 - With her body build and her weight Himiko has it easy to attack people with air attacks. In combination with her speed, they can even be hard to dodge.
Counters: 3/5 - In prison, Himiko learned how to deal with some moves and was able to make some decent counters against a number of attacks.

Regular appearance
Her bikinis
Other outfits and lewd poses

Before Himiko became the girl she is today the blond was quite different. Some people would even say that she was an angel. That changed as one day her parents had an accident. They did not die but there were in a coma. Only the life support systems kept them alive.
Himiko hoped that her parents would wake up. She visited them every time after school. One day their insurance couldn't pay any more for Himiko's parents. The doctors told her that they had to get Himiko's parents away from life support. The blond asked the doctors why they would do such a thing. They told her that they couldn't pay it anymore. One doctor then said that as long as she could pay for her parents they would stay alive.

That was where it all began. Himiko was happy that there was still hope left. She tried to find a way how she could make money. Unfortunately, around this time, she was only fourteen years old and nobody wanted to give her a job. The blond asked around her school on how she could make money. That was when she found out that she could get money by making out with her classmates. She was making over the time very much money but Himiko didn't get a chance to visit her parents. As the time passed and Himiko got deeper into prostitute her teachers noticed what she did. Himiko explained the situation and her teachers smiled. She was confused at the first moment until she realized why they smiled. The teachers said that they would keep it a secret and give Himiko money for her parents. But they were not satisfied with just making out. Himiko then saw how her teacher striped right in front of her. He slept with her and Himiko endured it because of her parents.

After a while, Himiko visited her parents. They were not in their room and Himiko asked one doctor. He said that he would be sorry and that Himiko's parents would be long dead. Realizing what she had done over the past weeks and how hard she worked for the money. Himiko falls on her knees. Everything she has done was for nothing. Himiko didn't cry. Instead, she got angry. Angry at the doctor who said that there was hope for her parents. He said everything would be ok as long as she would get money. She even got mad at the teacher who she thought knew that Himiko's parents would be dead. At this night she visited the doctor and asked why her parents would be dead. He answered that they could do nothing in the first place they were doomed the second their insurance did not pay any more. He laughed which made Himiko just more and angrier. She snapped and attacked the doctor. She slides his throat open and let him bleed out. Looking down at him she laughed. Laughed about the fact that all she did was useless in the first place. After that, she went to the teacher's house which she had slept with. She wanted to know if he knew that her parents were dead. He said yes and actually wanted to tell her. Himiko didn't want to hear his excuse and killed him.

Himiko got covered in blood to the hospital and she demanded to see her parents. They called the cops and arrested her. A few years later. As Himiko got eighteen she could leave the prison. She didn't know who paid for her release but she found her answer pretty fast. A man came to her and asked if she wanted to work for him. She laughed at him and said."Are you an idiot why would you want someone like me"? "Because we are always looking for new talents, but if you want to you can stay here until your dead" the man said. "Hahaha. Ok but I don't want to hear complains when I get rough with anyone alright." She said and was eager to see what would happen from now on.

Himiko was not always the sociopathic woman she is today. Normally her old self is showing when she is around animals. Himiko will try to pet them or even give them something of her own food.

The blond woman is fighting quite merciless. She punches and kicks at her opponent's until they gave up or can't continue anymore. For that reason, she mostly fights in hardcore matches because in normal ones the referee might interrupt her.

Even when the match has ended Himiko might continue to humiliate her opponent when she wants to.

It isn't a good thing to talk about her parent's or mention them in a bad way. This can trigger something inside her and Himiko might go into a demonic state in which she attacks her opponents a lot worse than before. It can happen that they end up in the hospital.

There are also cases in which Himiko treats her opponent nicely and with respect. These moments, however, are quite rare and won't happen just like this.

Accomplishments
None so far.

Trivia
Himiko has more than just one outfit to wear. However, she bought the same one multiple times. Her reason for that is because she does that out of sentimental reasons and that it reminds her on a time when her parents were still alive.
Himiko also has kept the outfit she had at the time she started to murder. The blond woman thinks that it intimidates her opponent in a match.
However, she also wears outfits without blood stains for some occasions.
The Swedish woman made herself a mask to increase the intimidating touch her outfit has on her opponents. Also, it can hide her facial expressions in a fight.
Last edited by Rougue on Wed Oct 17, 2018 3:09 pm, edited 3 times in total.
Rougue's Rogues
Top
Post Reply
1 post • Page 1 of 1