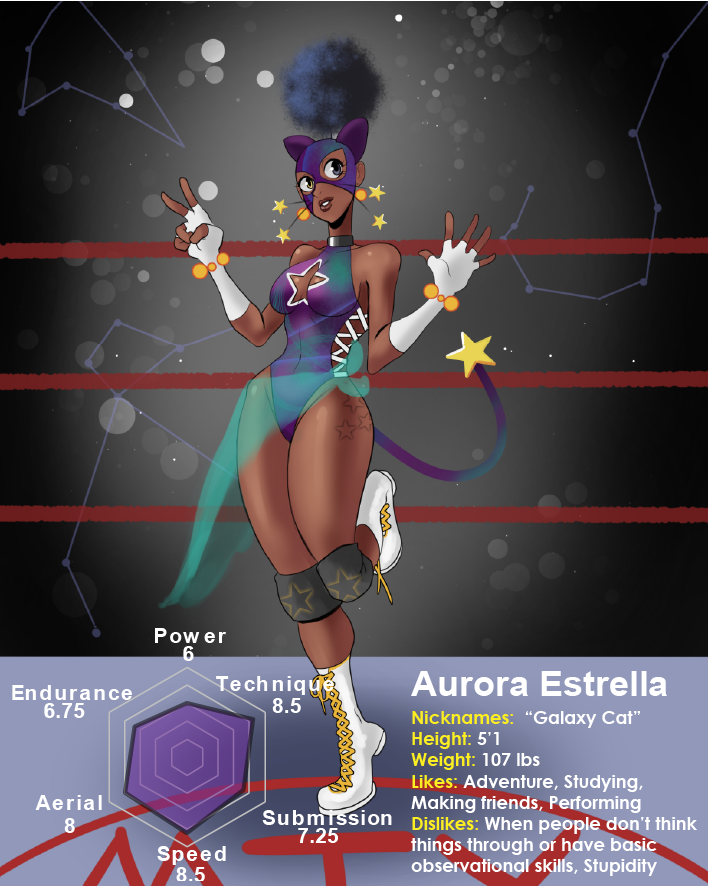 Aurora is a quirky and silly girl that grew up with an aptitude for academia. Having conformed to the stereotypes one would associate with a smaller, nerdy girl, she faced challenges in the form of bullying and heckling. Towards the end of high school, this culminated in her reinventing herself as an extrovert and training herself to become comfortable in front of crowds and people in general. Aurora would gradually work her way towards building her confidence by indulging in performance art. From dance to acting to eventually trying her hand at being a ring girl, the adventurous young woman found herself working as staff for a wrestling show and said to herself "I should try that".

From that point, Aurora began training. She had only spent a few months getting acclimated to the physically demanding life of a professional wrestler. Much to the annoyance of her trainers, the stimulated intellectual spent over a year wrestling with different gimmicks and costumes until she found one that both herself and the audience resonated with. She wrestled as a mad scientist, as a football player, a cheerleader, and so on. Eventually, the perky idiosyncratic girl settled on an outer space "galaxy" theme which she honed over the course of just a few months. Under this persona, she wrestles a rather balanced style, exhibiting different moves and strategies based on what her competition is capable of. Now the girl seeks to grow her following and further her journey of self-discovery by seeking adventure in and out of the ring!

Aurora is sweet and endearing at heart, but her intentions and altruism are wrapped within a curious and quirky mind. She often zones out and focuses her attention on details that others might miss or find irrelevant. Despite honing her body and skills for a life in the ring, Aurora is a curious nerd at heart, and she'll exhibit this in one on one conversations and interactions.