SmotherMatch: Victory decided via knockout with a smother hold. The winner of the match will become or remain the LAW Middleweight Champion. 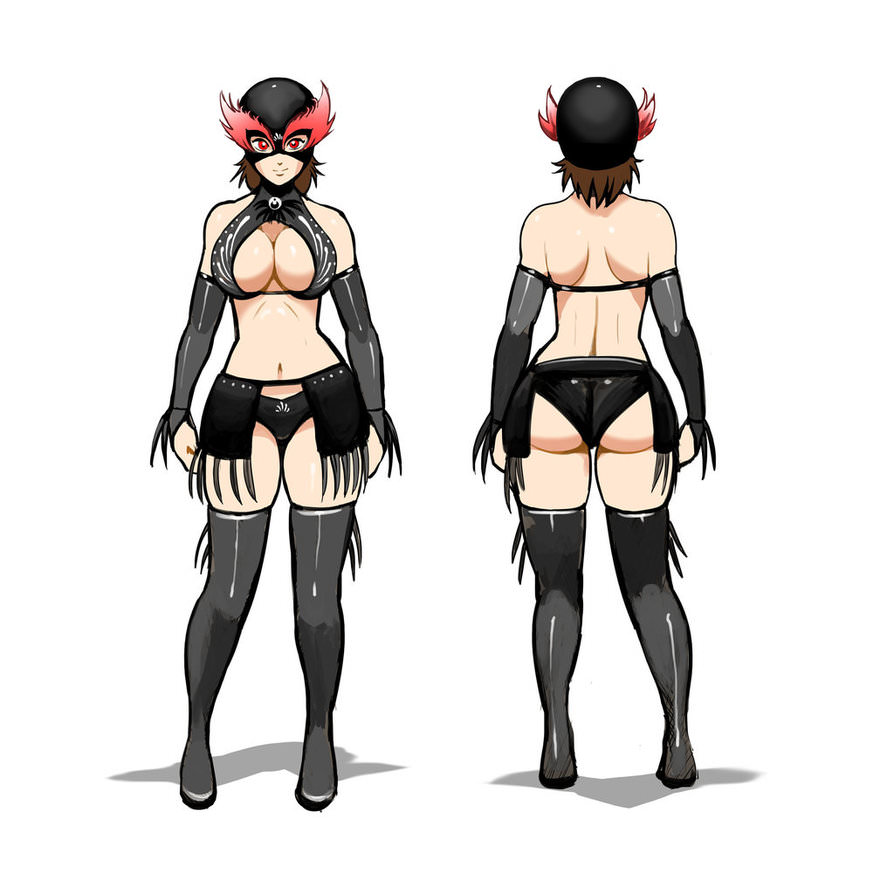 Tonight was the night. After countless years of preparing herself, all the time she spent in wrestling school, training to hone her body and her skills. After all the time she spent touring the indies, facing anyone and everyone she could, gathering experiences as she tested her skills against all others she could find. After all the time that she had spent earning a reputation for herself that eventually brought her to LAW, where she would continue to make a name for herself, proving her skill in match after match.

And now, tonight was the night to make good on all of that.

She had challenged Tina to a match for the title, after showing dominance in a tag team match against the Thundergirls, and luckily for her, the middleweight champ had accepted! And not only had she accepted, but she had let Swan pick the stipulation, leading the luchadora to choose a match that she knew she could do well in, and a type of match that Tina was definitely not used to! Everything was looking good for the luchadora, as she made her way out to massive cheers from the crowd, fans showing their support for the masked wrestler as she made her way out onto the entrance ramp, a smile on her face!
"That's right everyone! Here at last, the moment you've been waiting for! The crowning of your new middleweight champion!" Swan announced to the crowd, a smile on her face as she looked to pump up the audience! Despite her big talk, the luchadora was quite wary tonight, reflecting on how she'd need to be at the top of her game tonight to take on LAW's inaugural middleweight champion, and if everything turned out alright, take the belt off of her!
Ducky's Darlings!
Top

Tina was backstage watching as Black Swan had already crowned herself as a new champion before the match even began! Clad in her usual attire the current middleweight champion came out as soon as her music began to play clad in her usual tiger stripe wrestling attire. Tina held her belt up and kept it high as she walked down the ramp, smiling to the crowd while pointing to the fans! She made it to the bottom of the ramp she ran at the ring, sliding in underneath the bottom rope before springing back up to her feet again holding the belt.

Tina smiled at Black Swan and pat the title, pointing to her own waist before handing it over to the referee. "You made a mistake callin' yourself the new champion before you actually earned it. There is no way I am going to let you leave with MY title." Tina said, having become protective of the title, each successful defense having made her more and more confident. Tina stood in the center of the ring eagerly awaiting that bell. Sure the match type favored her foe but that was hardly the first time that happened to her during her reign.

She beat Tracy Cannon the high flyer in a ladder match, kept up with technical wonder Megumi Mutoh in a standard match and out brawled Navi in a falls count anywhere match. Each match type was tailored to her foe yet it was Tina who emerged victorious. She could take on Black Swan in this smother match... even if she had never been in one before. Backing off the champ crouched low awaiting the bell.
LAW Solo Roster
"Amazon" Alaina Sanders-Haines - Heavyweight
"Thunder Ryuko" Ryuko Yoshida-Middleweight
"Tigress" Tina Armstrong - Middleweight
"JJ" Janella Johnson - Middleweight
Helena Dubois - Middleweight
Raquel Masters - Lightweight
Hinata Huerta - Middleweight
Peggy McIntyre - Middleweight
Lauren Fredericks - Heavyweight
Hikaru Sawazaki - Middleweight
Sayako Jun - Lightweight
LAW Tag Teams
The Thundergirls - Alaina/Tina Team Up!
Irish Oldschool - Peggy/Lauren

Watching as Tina appeared at the top of the ramp, Swan kept her eyes locked on the champion as she began to walk down the ramp, or rather, on the championship belt that hung around Tina's waist, the masked woman focused intently on the prize. Tina's words reached her ears, but while the champion had quite a bit of confidence in herself, Swan was driven tonight, spurred on by her aspirations to win the title and become LAW's second ever middleweight champion!

"Oh, I'm not calling myself champ yet. Just soon-to-be champ! I know that I have to earn it, and trust me. I'm fully ready to show you tonight why I deserve to take that title off of you..." Swan said, her words trailing off as she made her point, that tonight, she would let her actions speak louder than her words!

So with that, the bell would ring, and Black Swan would step forwards, raising her hands as she began to circle around Tina, ready to kick off her title match against the Tigress!
Ducky's Darlings!
Top

"All right then sweet cheeks let's see what you are made of then!" Tina said as the bell rang. The tigress crouched low and circled Swan before lunging in to try to grab hold of Swan in a grapple!

With a quick response from Tina, Swan smirking slightly as the champion called her "sweet cheeks," the two of them would quickly rush towards one another, locking up as this title match finally kicked off in full! And almost immediately, Tina would put her plan into action, using her toned physique in order to shove Swan backwards a few steps, creating some space before suddenly rolling onto her back, planting a foot on Swan's toned tummy and flinging her over with a quick kick!

However, while Tina's monkey flip was quite smooth, Swan would one up it by rotating her body in the air, aiming to flip enough to get her feet under her before she'd land, performing an athletic front flip to catch herself, before turning with a smirk towards her foe!

"Funny you should say that, considering you know just how sweet these cheeks are!" Swan said, spanking her rear end towards Tina in a mocking fashion! "And soon enough, you're gonna be snuggled up with them once again!" Swan said with a smirk, before gesturing for Tina to rise, egging the champion to come at her, Swan preparing to retaliate against whatever Tina threw at her!
Ducky's Darlings!
Top

Tina got up, angry to see that her plan had backfired. Gritting her teeth she shook her head and rushed at Swan! "If ya think that is gonna happen again you are daft! I am gonna have to show ya that I can defend this title anywhere, anyhow!" Tina shouted as she moved right at Black Swan extending her arm and trying to catch her opponent with a clothesline! "I may just have to knock that pretty head off your shoulders first though!" Tina shouted as she ran, hoping to make a big impact provided Black Swan didn't have any other tricks up her sleeve!
LAW Solo Roster
"Amazon" Alaina Sanders-Haines - Heavyweight
"Thunder Ryuko" Ryuko Yoshida-Middleweight
"Tigress" Tina Armstrong - Middleweight
"JJ" Janella Johnson - Middleweight
Helena Dubois - Middleweight
Raquel Masters - Lightweight
Hinata Huerta - Middleweight
Peggy McIntyre - Middleweight
Lauren Fredericks - Heavyweight
Hikaru Sawazaki - Middleweight
Sayako Jun - Lightweight
LAW Tag Teams
The Thundergirls - Alaina/Tina Team Up!
Irish Oldschool - Peggy/Lauren

Flipping her body as she was launched over Tina, Swan managed to subvert the champion's attempts at a monkey flip by spinning in the air, landing on her feet with a smirk, taunting the champ as she did so, inciting Tina into action! And sure enough, the tigress would not let Black Swan freely tease her for long, quickly popping up to her feet and rushing towards Swan, replying with a snarky comeback as she rushed towards Swan, swinging an arm at her for a brutal clothesline!

"We'll see if you can pull that off! Gotta hit me first though!" Swan said with a smirk, watching closely as Tina rushed towards her, preparing to dodge! And at the last second, Swan would duck low to avoid Tina's strike, while sweeping a leg out in order to take Tina's legs out from under her, looking to craftily floor the champion before attempting anything more serious!
Ducky's Darlings!
Top

Tina couldn't even respond before her clothesline missed, leaving her tumbling face first to the mat! "Arrrgghhhhh!" Tina groaned as her head bounced off the canvas creating a brief momentary daze for the middleweight champion. She was starting this off like her defense against Megumi, a match Tina struggled to win after surging back at the end to take the fight to the technical based wrestler. If she could come back against her she could do it against Black Swan.

Showcasing her impressive speed and athleticism quite early on into the match, Black Swan would manage to avoid Tina's clothesline, before striking back at the champion, sending a low kick Tina's way, knocking the tigress off of her feet! And while the champion would collect herself on the mat, beginning to raise up, Swan would continue to put on a show for the crowd, giving them a small wink before turning her back to Tina, rushing towards the ropes and bouncing off!

"You're tough, but I'm not afraid to beat on you for as long as it takes!" Swan cried out, heading back towards Tina with a quite speedy run! From there, Swan would look to leap up and wrap her legs around Tina's head just as she got to her feet, swinging around her and yanking hard with her legs, aiming to throw the champion overhead with a huricanrana!
Ducky's Darlings!
Top
Post Reply
77 posts