This section will be used to record relevant news related to championships, and to provide a reference of wrestlers able to challenge for titles.
Post Reply
First unread post • 3 posts • Page 1 of 1 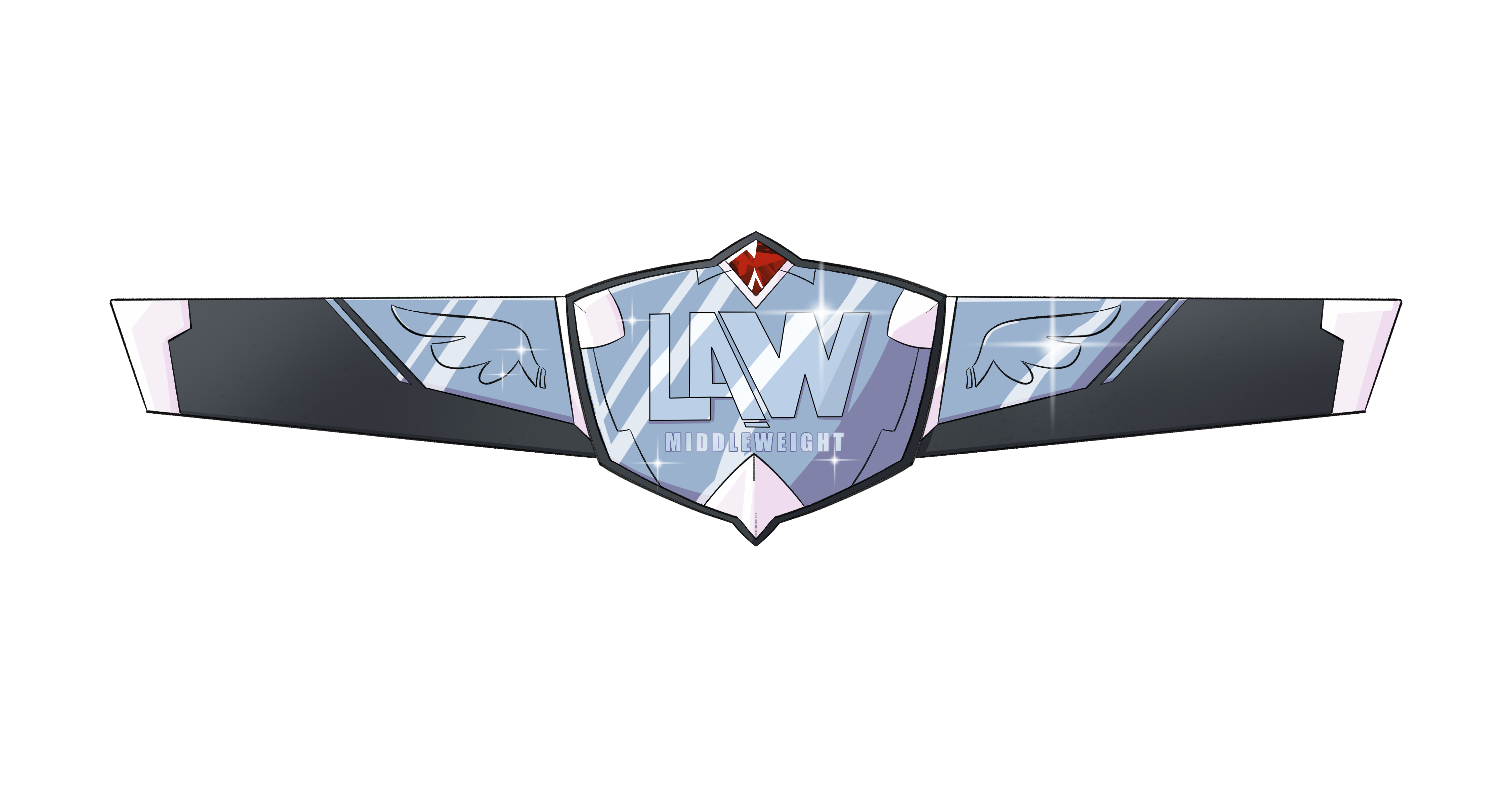 1. A grueling tournament to determine the first ever Middleweight Champion in LAW culminates in the company's signature PPV, We Are Law as finalists Tina Armstrong and Erin Quinn face each other in the main event. After a competitive back and forth, Tina was finally able to put away Erin with a decisive Tiger Bomb and scored the pin fall: making history as the inaugural LAW Middleweight Champion. Middleweight Championship Finals

2. Tina's first defense as champion has a rocky start as she is challenged by rival and protégé to Katherine Hart, Tracy Canon, in a ladder match. The students of two highly accomplished veterans did their teachers proud as they engaged in an incredibly physical match up with differing styles as Tracey's high flying maneuvers nearly won her the title on multiple occasions. Yet Tina would display the heart of a champion, weathering the storm and knocking Tracey off the ladder during the climax of the match, allowing her to grab the belt and win the match. The celebration would be short lived as Navi Florges would suddenly attack the two tired wrestlers, setting the stage for Tina's next defense. Vs. Tracy Canon

3. Tina's second title defense occurred during the Law of the Jungle 2018 when she was challenged Megumi Mutoh. The woman nicknamed The Genius, proved that the moniker wasn't self-proclaimed as Megumi displayed her technical wizardry against the powerhouse protege of Alaina. Faced against a prodigy of Megumi's caliber, Tina would've considered to have been the underdog. Yet Tina endured, over powering Megumi and besting her to successfully defend her title in a MOTY contender. Yet once again would Tina's celebration be cut short as Navi would once more attack her after the match, before declaring herself the number one contender for the Middleweight title. Vs. Megumi Mutoh

4.Another physical match-up was in store for Tina as she defended the title against former friend turned enemy, Navi Florges, in an Falls Count Anywhere match. Navi carried a large chip on her shoulders upon losing to Tina in the semi-finals of the middleweight tournament and sought to rectify what she had considered to be a blight on her record. Tina however, was looking to get revenge for the ambushes she had been receiving from Navi ever since the ladder match. It was last of a match and more of a brutal fight, one where Tina ultimately succeeded in defeating the ambitious Navi and finally finds closure in her rivalry. Vs. Navi

6. Tina Armstrong's latest challenger proved to be a thorn in her side as Lillian Byrne conducted repeated vicious attacks against not only on the champ, but against Tina's mentor, Alaina Sanders as well. The heated rivalry culminated in a physical Hell in a Cell Match where Lillian forced Tina to submit to the Liontamer and thusly wins the Middleweight championship, becoming the second to do so. Vs. Lillian Byrne
Last edited by winner3 on Mon Mar 15, 2021 9:25 pm, edited 3 times in total.
Come Witness the Order viewtopic.php?f=21&t=3341
Top

1. Tina Armstrong's latest challenger proved to be a thorn in her side as Lillian Byrne conducted repeated vicious attacks against not only on the champ, but against Tina's mentor, Alaina Sanders as well. The heated rivalry culminated in a physical Hell in a Cell Match where Lillian forced Tina to submit to the Liontamer and thusly wins the Middleweight championship, becoming the second to do so. Vs. Tina Armstrong (c)

2. Lillian's first challenger was Karen Meadows, who earned the right after managing to draw the champion's ire. While Karen came into the match focused, Lilian proved to be hungrier as she was eager to prove that her title win wasn't a fluke -- forcing the challenger to tap out to the Liontamer and retain the title. Vs. Karen Meadows

3. Lillian's next defense was contested in We Are Law 4 when she was challenged by Jessica Wright to a Last Man Standing Match. The Violent Violet from the Midwest had much to prove, finally getting an opportunity for the title after years of hard work whereas Lillian was intent on keeping her title on the biggest stage in LAW. The match was physical with Jessica pushing Lillian to the limit, but Lillian's propensity towards violence allowed her to gain the upper hand. The champion would deliver the death kneel to Jessica's hopes upon delivering a DDT to the giantess on the announcer's table, putting her down for good. Vs. Jessica Wright
Last edited by winner3 on Mon Mar 15, 2021 9:26 pm, edited 1 time in total.
Come Witness the Order viewtopic.php?f=21&t=3341
Top
Post Reply
3 posts • Page 1 of 1