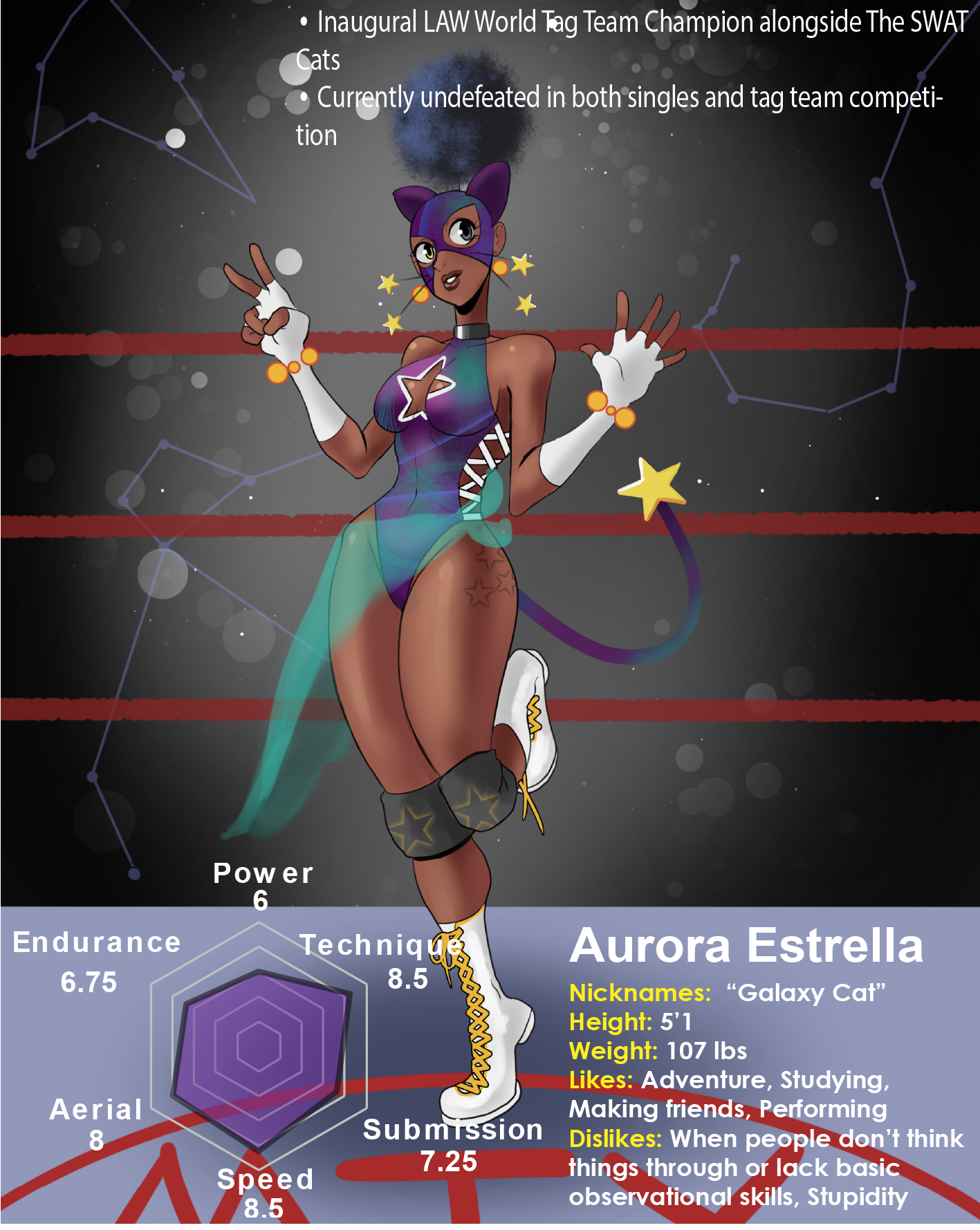 Aurora is a quirky and silly girl that grew up with an aptitude for academia. Having conformed to the stereotypes one would associate with a smaller, nerdy girl, she faced challenges in the form of bullying and heckling. Towards the end of high school, this culminated in her reinventing herself as more of an extrovert and training herself to become comfortable in front of crowds and people in general. Aurora would gradually work her way towards building her confidence. She took speech classes, dance classes. She didn't enjoy things like theater, but she did find herself enjoying some performance arts. Things that were more freeform like dance and improv. As she continued reinventing herself, Aurora took up the odd gig here and there, making fast friends and becoming more confident until she eventually referred to a gig to be a round/ring girl, holding up the cards between rounds at fight sports like boxing matches and MMA. While she didn't take to those quickly, she was scouted as a prospect for a local wrestling promotion.

Aurora took the talent scout up on it and tried her hand at the whole wrestling shtick. Becoming proficient in so many physically demanding hobbies throughout junior high and early highschool gave her a leg up on her peers. She did well in her tryouts and decided to give wrestling a try when she got approved for a grant to attend that wrestling school. She was a natural in the ring, picking things up much faster than your average girl. It didn't hurt that she could have some fun, too. The hardest part was landing on a gimmick. Something that would help her connect with a crowd. Aurora tried many costumes and personas. She wrestled as a mad scientist, as a football player, a cheerleader, and so on (she did really enjoy the mad scientist gimmick but it wasn't getting over). Eventually, the perky idiosyncratic girl settled on an outer space "galaxy" themed cat. Her initial inspiration came from the dead nyancat meme. She retooled it with the help of a costume designer and came up with something really special. Under this persona, she wrestles a rather balanced style, exhibiting different moves and strategies based on what her competition is capable of.

Despite her size, Aurora is a capable all-arounder in the ring. While she doesn't bring a ton of power to the table, her ability to use all other move categories, and her ability to think on her feet and keep her offense varied, help her adapt to her competition. As she rose through the ranks and as LAW became a more and more prominent promotion, she was scouted and picked up by the organization. With a lucrative contract to her name, Aurora took up the task of trying to be a successful wrestler and a successful college student at the same time! Her adventures at LAW had her get lumped in with Katherine Hart and Tracy Canon during a faction war between the two cats and the three-woman dog stable, Cerberus. Having been accused of being a SWAT Cat, Kat and Tracy decided to roll with it and welcome her into the fold! Cerberus had unknowingly made the team that much stronger and well-rounded! And Aurora found lifelong new best friends in the hotheaded Tracy and the charismatic Katherine Hart!

Aurora is a good person and sweet and endearing at heart. She often appears to zone out or look aloof, but this is intentional. The girl knows more than she lets on. Aurora has a curious and quirky mind. She loves to learn and loves to think outside the box, approaching problems and opponents in ways they don't expect. Estrella strives to learn and grow and to develop meaningful bonds as she continues her journey of self-discovery and growth.

Trivia
- Aurora wrestles full time while attending school fulltime
- Aurora gets sentimental easily. When Tracy and Aurora wouldn't agree to wear matching charms, she instead suggested that they use matching finishers, resulting in the shared submission finisher between the three
- Aurora tutors Tracy since Tracy isn't attending school. Tracy slacks off a lot during tutoring and Aurora often wrestles her into studying and doing her homework