Standard Match: Victory to be awarded via pin fall, submission, knockout, countout, or disqualification. The winner will become or remain LAW's Middleweight Champion 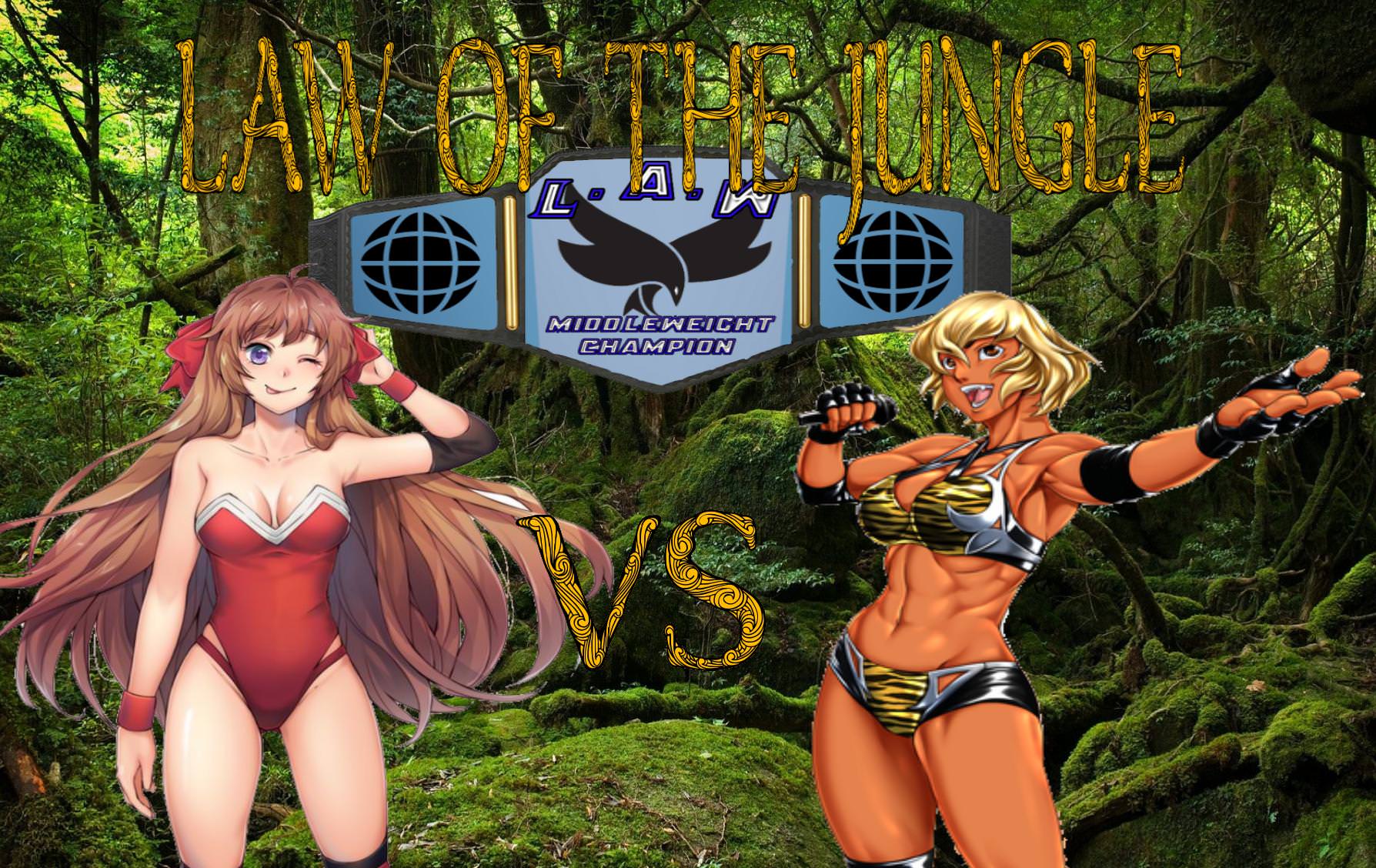 Megumi Mutoh had already prepared herself for her upcoming title match against the Middleweight Champion, Tina Armstrong, in this PPV. Wearing her signature strapless red leotard, she did one last check-up in the locker room, making sure that she looked presentable for the match. She might not care much about looking pretty in the ring, but there was a reason why many people considered her one of the 'idol-type' wrestlers in Wrestle Angels. And tonight, for the title match, she would show the relative beginner, Tina, how a pro fight in the ring. She might never consider herself old, but due to the gap between their ages, Megumi couldn't help but feel a little patronizing over the younger wrestler.

Once she's fully prepared, Megumi waited for her cue to make her entrance. When her entrance theme, Golden Nocturne, was played, Megumi made her entrance, greeted by the cheers from the crowd. Smiling at them, she waved her hands as she walked down the ramp, heading over to the ring, where the match would be held. She could tell that the crowd would be divided for whom they would be cheering on, but that was fine. She knew that Tina was a fan-favorite too, but it was her duty to show them how the real wrestler fight. 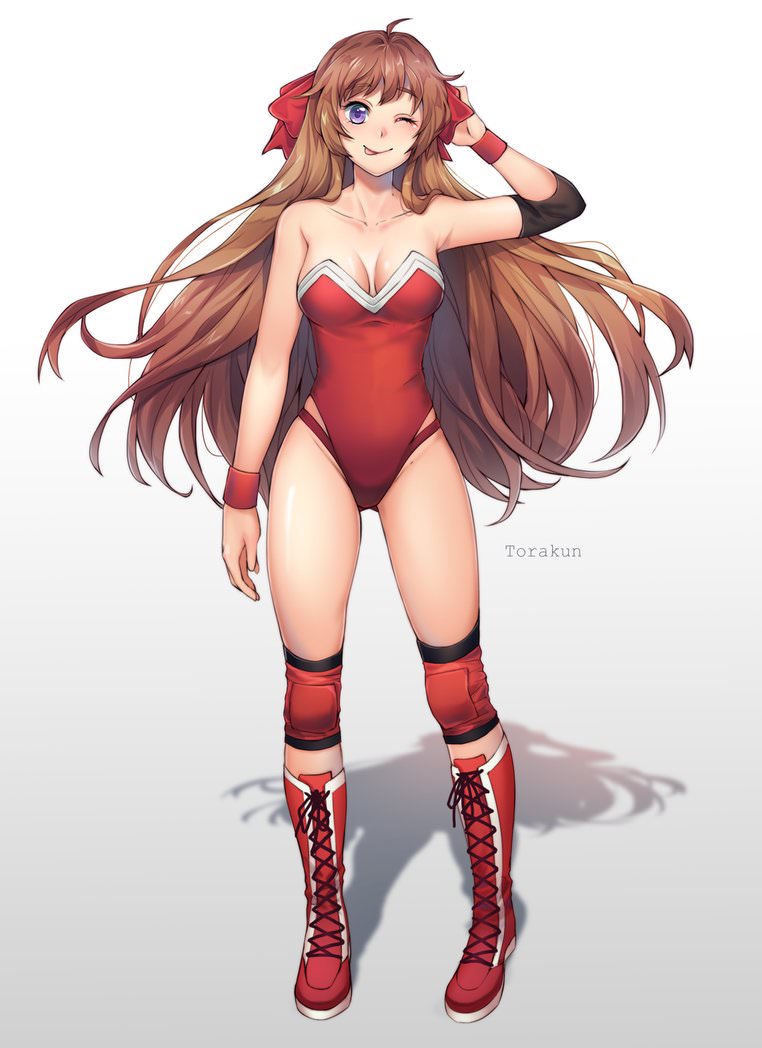 Once she reached the ring, she climbed up the apron, holding onto the ropes before entering the ring. She would rouse the crowd as she would raise her arms, walking around the ring before standing in the center to give them a bow from each direction. Megumi knew that while she still thought that she was a more deserving champion compared to Tina, she still knew that the current champion wasn't one to be underestimated. And for someone with younger age to hold the gold, Megumi had to be careful around her.

Then again, for someone with the moniker 'The Genius One', she was certain that she would find a way.

So, she would wait for the champion to make her entrance as she would head over to the corner, leaning against the turnbuckle as she looked at the direction of the entrance. She was looking forward to see what Tina was truly made of. She had defeated her once before, but it was only a spar. She might be a different beast altogether in a real match.
PrinceArjuna's Roster
Top

Even though Tina was the champion she felt like she had something to prove. She defended her title once but she was against a woman who managed to beat her in a little gym spar that the two had upon a chance meeting. Tina felt like defending the title a second time would show the world what type of champion she was. She could hang with anyone. The tournament wasn't a lucky streak and the defense against Tracy wasn't a fluke. Tina was ready, clad in her tiger print two piece attire to show off her rock hard body.

As her music played the crowd roared and she held her title belt high before strutting to the ring with it hanging over a shoulder. She high fived fans and appeared to be all smiles as she made her way to the ring, sliding in underneath the bottom rope. After handing the belt to the referee who held it high Tina settled into her corner doing some stretches before stepping out to the center of the ring. "I am ready when you are, and you did beat me in the gym, I admit that. I am going to go all out and tonight you are going to see something totally different from me. I hope you know what you got yourself in to." Tina said confidently as she approached Megumi, extending her hand for a handshake. "Let's do this." Tina added to show that she was ready to go as soon as the bell rang.
LAW Solo Roster
"Amazon" Alaina Sanders-Haines - Heavyweight
"Thunder Ryuko" Ryuko Yoshida-Middleweight
"Tigress" Tina Armstrong - Middleweight
"JJ" Janella Johnson - Middleweight
Helena Dubois - Middleweight
Raquel Masters - Lightweight
Hinata Huerta - Middleweight
Peggy McIntyre - Middleweight
Lauren Fredericks - Heavyweight
Hikaru Sawazaki - Middleweight
Sayako Jun - Lightweight
LAW Tag Teams
The Thundergirls - Alaina/Tina Team Up!
Irish Oldschool - Peggy/Lauren

Megumi looked at the current Middleweight Champion who made her way out of the entrance, walking down the ramp and heading over to the ring. She could tell that she was a champion material, but she had to prove herself before someone like Megumi, a notable genius of wrestling. She leaned against the turnbuckle as she waited for Tina to enter the ring. Once the champion had entered, she smiled as she walked away from the corner, approaching the champion.

"I expect nothing less from you, Tina..." Megumi said, smiling confidently at her opponent before she saw Tina extending out a hand, offering her a handshake. Nodding, she shook Tina's hand. "Alright, no matter who wins this, no hard feeling, alright?" She wasn't that naive to think that this would be a walk in the park, knowing that Tina won the title for a reason. Still, Megumi wasn't one to not hold back in this kind of thing, and she would show her why people called her 'The Genius One'.

They parted way for a bit as the referee checked whether both of them were ready or not. Once the bell was rang, the match would begin. Megumi would take a stance, looking straight at Tina. She would shimmy aside for a bit, looking for a better angle for her to close in before she rushed over to her opponent, looking to lock up with her with a collar and elbow tie-up. She would like to test the water first, grappling with her before she could try overpowering the champion.
PrinceArjuna's Roster
Top

Tina was in agreement about not having hard feelings, giving Megumi a nod. She was too focused on tearing her apart to talk, as Tina wanted to walk back out with the title after the final bell. Tina lunged in and Megumi stonewalled her in the grapple, leaving the bigger Tina to tense up her whole body as she tried to put all her conditioning to the test, howling as she tried to push back against the powerful Megumi in an effort to force her into the corner! IF she could get Megumi to the corner it would give her way fewer options as far as dodging Tina's subsequent offense. Tina gave it her all, using all her considerable strength against the stalwart Megumi.
LAW Solo Roster
"Amazon" Alaina Sanders-Haines - Heavyweight
"Thunder Ryuko" Ryuko Yoshida-Middleweight
"Tigress" Tina Armstrong - Middleweight
"JJ" Janella Johnson - Middleweight
Helena Dubois - Middleweight
Raquel Masters - Lightweight
Hinata Huerta - Middleweight
Peggy McIntyre - Middleweight
Lauren Fredericks - Heavyweight
Hikaru Sawazaki - Middleweight
Sayako Jun - Lightweight
LAW Tag Teams
The Thundergirls - Alaina/Tina Team Up!
Irish Oldschool - Peggy/Lauren

Locking up with Tina, Megumi would exert her strength as she tried to push the champion back, but it was clear that she got herself beaten in terms of physical strength. She had to admit that Tina was physically stronger than her, but being strong wasn't everything, especially in a wrestling match. She would let herself be pushed a few steps back during the lock up. Once she felt like she was getting closer to the corner, she would make use of the momentum of Tina's push against her as she would try to twist around, looking to push her opponent chest first into the corner.

Knowing that merely having her colliding against the turnbuckle wouldn't be enough, Megumi planned to drive her knee into the back of Tina, hoping to put some damage on her.
PrinceArjuna's Roster
Top

Things were going according to plan for Tina, at least for a short time. Megrim spun her around at the last minute and Tina was the one stuck against the corner! "Why you... Arrrrghhh!" Tina groaned as the knee strike hit home. Her abdomen throbbed and she bent forward, but stayed up on her feet as her arms were draped across the top rope. This was a terrible spot to be in and a poor way to kick off the match especially after the spar had gone in Megumi's favor.

Megumi smiled when her attack connected, but she wasn't content with those. With Tina trapped at the corner, she would milk it for all its worth as she would grab Tina's head from behind as she would attempt to smash her forehead into the turnbuckle. She hoped that by doing that, she would be able to leave her opponent disoriented so that she could pull her away from the corner, dragging her back to the center of the ring.

She planned to bring Tina to the middle of the ring so that she could attempt to nail a short-arm lariat into her neck, sending her tumbling down into the mat. She would show it to Tina that she needed to step up her game if she wished to take the Combat Genius head on.
PrinceArjuna's Roster
Top

Tina groaned as she was up and had her head bounced hard off the turnbuckle! She was limp legged as she moved back towards the center of the ring. As she stood wobbling she saw Megumi lunge in with her arm extended. Tina was desperate and knew she was in a horrible spot against a woman whom she had little success against before. Tina ducked low, trying to get behind Megumi as she dodged the lariat.

Dragging Tina to the center of the ring, Megumi then tried to nail her opponent with a lariat, only for the younger wrestler to duck under her arm, dodging the lariat before she moved behind her. The champion wrapped her arms around Megumi's waist before she lifted her up and brought her down into the canvas with a back drop!

"Uaghhhh!!!" Megumi cried out in pain as she hit the mat. Still, it wasn't enough to keep the Genius Mutoh grounded as she would quickly try to roll herself over onto her side before pushing herself up, forcing herself on one knee. She let out a grunt from the pain she took from the drop, but she still had lots of fights left in her. If Tina thought she could keep Megumi down with that move, she was sorely mistaken!
PrinceArjuna's Roster
Top
Post Reply
93 posts

Return to “LAW of the Jungle”