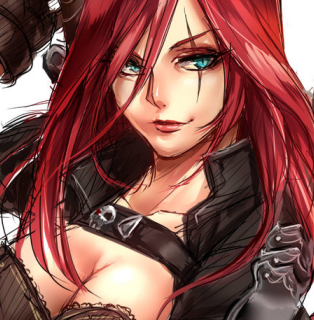 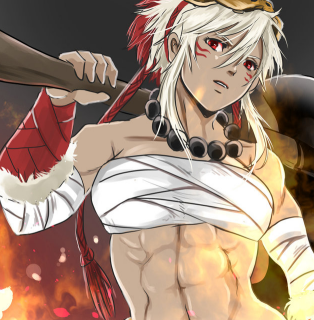 Appearance
Stick and Stone are a unique duo. Stick is a slender beauty with deep red hair, possessing an amazing figure who could have easily given her a life as a super model. She has no trouble showing off most of her skin when she feels like it. She has a scar over one of her eyes from a past accident in which Stone saved her, but it only seems to add to her bad girl image.

It is Stone however who gains most of the eyes for different reasons. Stone is a colossal women in size and stature, with unique red eyes and white hair. She often dresses with wraps around her powerful chest and wears long pants and wraps around her feet. She is an imposing figure, and it is quite a sight to see the smaller and much slender Stick and Stone standing together given their vastly different statures.

Personality
Stick is the brains of the unit as it were. She stands at ringside as the manager of Stone who is the one who fights the matches. She is a cocky sort even without any real wrestling skills, as it is Stone who does all the punching and crushing on her behalf. As such, Stick is somewhat of a coward when faced with danger, often hiding behind the wall that is Stone should she come under threat. She wastes no time taunting from that position however.

Stone seems void of any personality, and at times looks like a lost child. She fully depends on Stick to command her through speech, gestures and snaps of her fingers. Without Stick, Stone does very little and simply waits for her. She seems incapable of speech but grunts and shouts when exerting. Stick naturally does the talking for the two of them, and a lot of it she does as well.

Though it seems like Stick bullies Stone at times, Stick actually cares for her deeply and has helped the giant for a long time. The two are largely inseparable and work as a full unit.

Strategy: Devastating and crushing strength is the general gameplan for Stick and Stone. Stone listens to the commands of Stick and she dictates Stone's moves. Stone relies on absolute raw strength, and is capable of tossing opponents of her weight class with frightening ease. She is a monster of a wrestler. She will throw, toss, slam and crush her opponent with raw strength at the command of Stick. Due to her size and stature she is capable of taking a lot of punishment to boot, and tends to even flinch off some moves.

Her biggest and most true weakness is Stick. As long as Stick is barking commands be it with speech, gestures, stamps or clicks, Stone will always comply. Should anything happen to Stick, Stone functions very poorly on her own and almost becomes lost, barely defending herself and often looking for Stick to tell her what to do next. At the same time however, if Stick manages to declare she is in danger, Stone will become enraged, and will near turn berserk in order to protect her. Such a move is only saved for if Stick believes she's in trouble, as often the referee can become a target to her rage and cause disqualification.

Preferred Matches: Any match where Stick can be present

General Statistics
Endurance ★★★★★ - A giant of a woman, it is only natural that Stone can take a lot of punishment. Some moves do not even phase her such as standard strikes and weaker slams. She is amongst the toughest in the federation... but even then is not unbeatable even with Stick... however it will take a lot of work to bring her down, especially at her best under Stick's strict command.
Strength ★★★★★ - With her sheer size comes crazy strength. Stone can seemingly lift anyone and with ease. Only the strongest can test her strength, but due to her size she can often swing momentum into her favour. Stone is up there as one of the strongest competitors in raw strength.
Speed ★(★★) - Stone responds to Stick's commands instantly, and as such... she can move surprisingly well and with decent speed. Without Stick however, her reactions drop significantly and at times she can be near unresponsive to anything, allowing enemies to near attack freely.
Defence ★(★★★) - Again, Stone's high defence relies heavily on Stick's command. If Stick speaks, Stone listens and responds in kind. As such, Stick can talk her through any situation, and as such gives Stone quite a strong defence against onslaughts from opponents.
Technique ★(★★★) - There is certainly some finesse to the giant's moves. Stone is good at transitioning opponents with raw strength and some technique. Plus Stone has a good grasp of wrestling moves and how to perform them to maximum proficiency... so long as Stick is there to help her through it.

Wrestling Statistics
Strikes ★★★★ - With her raw strength, comes big hits. Stone can land a nasty Big Boot or deliver a Haymaker with precision. Even without Stick, a wildly flung fist can still deal damage if she can hit you.
Submissions ★★★★★- Stick likes to see Stone crush her enemies or pull at their limbs. Whilst she lacks technique with submission moves, her raw strength still makes any hold excruciating.
Powerhouse ★★★★★- Stone can throw an opponent all day. Powerbombs, overhead lifts and suplexes can be done with relative ease.
Aerials - X . Stone is afraid of the turnbuckle and will not climb it. It is the one thing even Stick can't make her do.
Counters ★★★★- With power on her side and careful transitioning, Stone has a good counter game. She can stride into punches to break attacks and generally monster her way over her opponents.

Signature Move
Stone Crash: Stone throws opponent into the ropes and runs against the opposite ones. Stone then jumps and body splashes the dashing opponent, smashing them down with all the momentum to the ring floor.

Finishing Moves
Snap, Crackle & Pop: Modified Frontal Bearhug
As time passes, Stone will dip the opponent further and further back to add gruelling pressure onto the base of their spine, and continue to crush. Bone Breaker: Gorrila Press into over the knee backbreaker

Past
Anya and Stone have been friends since a young age. Though there is a five year age gap, given how slow Stone's mind work she was kept back year after year to help her learn at her own steady but turtle speed rate. Anya has always been a smart girl. Since moving to the United States at a young age, she knew how to pick her friends and her fights. She befriended Stone when she witnessed her being bullied by not just students her own age, but of Anya's age too. Everyone picked on the harmless giant of a girl, and she never so much as raised a fist or even so much as an eyebrow.

Anya for all her faults as an ambitious and frankly treacherous girl decided to stand up for Stone, but in a clever way as not to lose her popularity in school. No, Anya would meet with Stone in secret and plant ideas in her head, telling her what to do, and how to do it. No one had spoke to Stone before like Anya had, to the massive lady, it felt like having a friend. At first Anya simply used her to get at those she had a disliking too... Stone would take the flak for her plans, attacking certain girls and boys and getting into trouble whilst Anya would walk free.

Eventually however other girls got onto Anya's schemes, and they came after her in revenge. It was Freya Stone however who came to Anya's aid when she was most in trouble. Anya realised then how much Stone cared for her, and though normally a selfish lady, she found real friendship in Stone. Though she still used her for her own ambitions and protection, she no longer saw Stone as a pawn but rather a good friend.

The two have been near inseparable since. Anya gained the nickname Stick because of her cowardly nature of hiding behind her buddy Stone... making the duo Stick and Stone. Stick was the brains, Stone was the brawn. Given Stone's talents for taking Stick's command, it wasn't long before Anya had a new scheme, knowing she could Stone's massive size and fighting prowess. They entered Underground fighting circuits for money, becoming a household name before federations began to approach them.

Since then Stick and Stone have been in the wrestling business, gaining significant fame overseas in Europe and Japan. The LAW has sought the duo for some time and have finally landed a contract with Stick and Stone. The two look to make a name for themselves now in the biggest federation in the world. As long as Stick and Stone remain together, they will work as a single unit and crush anyone who dares to stand in their way.