Backstory
Skylar grew up always comparing herself to other girls. She liked to flirt with boys who were taken, just to see how she measured up against their girlfriends. It made her feel good to know that she was desirable enough to steal another girl's boyfriend. This got her into her fair share of fights. She liked it. She liked putting herself against other girls, and seeing the look on their faces when she showed them that she was sexier than them to be able to steal their boyfriend, and strong enough to kick their asses in a fight. It was only natural that she would eventually get into wrestling. As she got better and better at it, she heard of sex fighting. Once she became of age, she decided to try it out. She loved it. She loved putting herself against another girl, and making her cum. She liked knowing she was cute and seductive enough to even get another woman off.

Personality
Skylar is often friendly, if a bit snarky and insensitive. She's incredibly competitive, but rarely seems to take it seriously on the outside. She tries to make friends with most of her opponents.

When angered, Sky can be incredibly violent. If someone is more harsh to her friend than Sky is comfortable with, she'll often threaten them with violence if they don't apologize.

Hobbies: Having sex and fighting 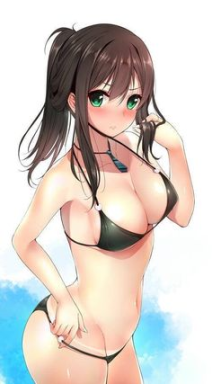