If ever there was a figure that defined the term 'Jill of all trades,' little argument could be had towards it being Alizeh Mirdori, also known as the Emerald Storm.

Lightning fast, shockingly powerful and with a massive array of holds at her disposal, we come together for a sit-down interview with Ms. Mirdori to figure out what makes this storm just keep on going. 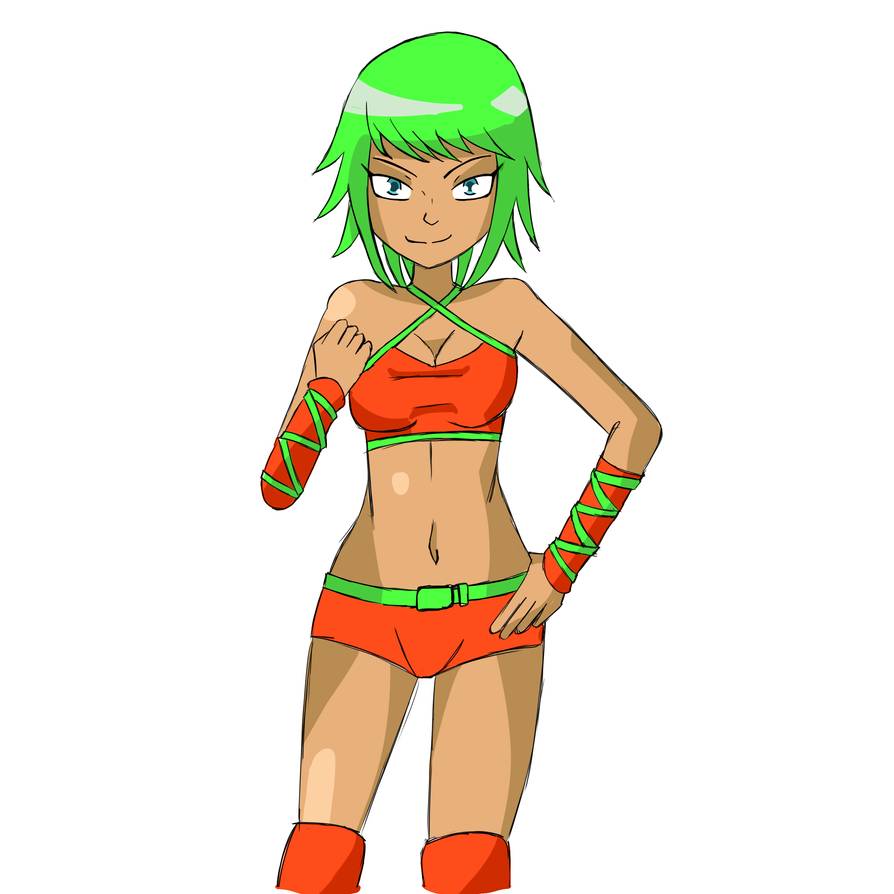 ---
Alizeh Mirdori! Thank you so much for joining us. Having been here for a year, it sure feels as though this interview is overdue. How are you faring of lately?

"Hey its no problem-o at all I’m just psyched to do my first interview! Right now I’m great. As you mentioned my first year in LAW came not too long ago and I gotta say it was an awesome first years. I've had some awesome matches, met some amazing people and I’m looking forward to another great year."

Any immediate plans for the future? Do you see yourself tackling Lillian Byrne for a shot at the gold?

"Hehe oh you bet. From the start I’ve made it clear I’m here to prove I’m the best. And so long as Lillian has that title around her waist you can bet I’ll be gunning for her. Other than that I also plan on making a splash in the tag division with a special friend of mind. I’m also keeping my eye open for whenever that open weight belt gets announced. In short I want gold, and I don’t care where I get it from."

What are your thoughts on Ms. Byrne's reign so far? Do you think you could out-do it if given the chance?

"Well I won’t lie, I don’t agree with Lillian’s attitude as a competitor. I totally get that competitive spirit, but she just takes it too far sometimes and it leaves a bad taste in my mouth. However that being said I’ll never disagree when I say the woman is a top tier competitor. There’s a reason she’s champ and all her matches have been amazing as well as her reign over all. But with me and every other middleweight in LAW hot on her heels you can bet it won’t be long before its over. As for the second half of you’re question you bet. I’d absolutely outdo it. I’ve always dreamed of being a fighting champion, and as someone that tries to bring the best out of her opponents, you can bet on me to have a lot more defences with each and every one having my all behind it. That’s just the type of gal I am. I put everything I’ve got into everything I do, so trust me when I say I’d do everything to elevate that belt."

What about ideal opponents. Who do you see yourself tangling with in these upcoming weeks?

"Oh boy you just opened up Pandora’s box haha. There’s lots of gals I wanna face, and some dudes too! Number one on my list is of course Lillian. But I also need to have rematches with a few people. First and foremost being Alaina, she’s been my idol since forever and ever since my loss to her Ive training like crazy to avenge it. Besides her I’m also eager to take on both Tina Armstrong and Daniel Haines. Considering the relationship they have to Alaina and their individual skill is just what I’m looking for in competition. Speaking of rematches, I've gotta go against Marianne again. She got me good last time so I’d love to face her once more. Same with Sanae Saitou. We had an amazing match before and I wanna give her a rematch. As for people I haven’t faced before I’d be a idiot to not mention Kyoko Akan. She’s such a dominant force and staple of LAW, despite not having the best attitude I know her trash talk is something she can back up. Finally the only other person that comes to mind is Ashley Lucas. The girl is someone after my own heart, and I know a match between us would be amazing."

Interesting. So do you feel the open weight belt is overdue? Or could it come out tomorrow? Who do you think deserves it most, besides yourself?

"Oh I absolutely think it’s overdue. There’s been a lot of discourse about differences between weight classes, so the open weight belt would be a perfect way to see who’s really the best, and its why I think its really necessary. But for that reason I see why their taking their time unveiling it. As for who deserves it? Gosh that's a tough one. Besides yours truly a veteran like Alaina or Panther Risako or even Dana Ashford would really add prestige too it. But if we’re talking younger blood, loathe as I am to admit it, Camie Young would honestly make a fitting champ. Though I’d def take it off of her. Other than them... Hmm I’d honestly say Maria Castillo. I remember watching her matches growing up and she’s a force. Her matches against Tara and Agatha show she can tussle with girls of any size and come out on top."

How would you approach the likes of Alaina if you were to fight once more?

"Before when I fought Alaina I overestimated my technical game. I thought I could evade her long enough to lock in a few submissions and get to tap. But her slams and power really through a loop. A bulk of my training has been spent muscling up and increasing my overall skill base. That way I can match Alaina head on, wear her down, than take her to the mat to finish her off."

And finally, what are your thoughts towards the recently unveiled LAWLESS belt? Could you see yourself joining the chase for the championship?

"Oh yeah the LAWLESS belt! Haha poor Amber I felt SO bad when she found out everyone knew where she was haha. But no, unless given a literal gold opportunity the LAWLESS belt isn’t really my style. Look wise or in what it represents. But I certainly look forward to seeing what it brings to the table going forward!"

We look forward to seeing the culmination of Ms. Mirdori's efforts against both Panther Risako and Niko Tomiji in the coming weeks.
DEVILISH'S DEVILS
I Am The LAW
LAW MAGAZINE
Top
Post Reply
1 post • Page 1 of 1