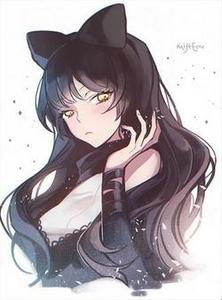 Ring Performance:
Blake is a natural Tweener with the willingness to do anything for a win but wants to maintain a positive popularity. She won't exactly go for punishing maneuvers but is liable to look for revenge if pushed.

Her Moveset is fairly standard with no preferential treatment given to how she manages the match. Typical strategy is to utilize a strong ground game with technical wrestling and surprising punches and kicks to the upper torso to attempt to wear down an opponent. If her opponent is at the point of staggering, she'll look to apply submission maneuvers to target what she considers the weakest spot. However, her general preference is to score a knock-out and will seek maneuvers that target the neck such as Dragon Sleepers and Octopus Holds. Pinning is only an option when she considers she delivered a hard enough hit to her opponent.

For Match Preferences, she will absolutely not stoop to lewd matches as that is degrading. She will, however, being will to consider all other types of matches. Her particular favorite is to challenge an opponent in what they consider their advantageous scenario and defeat them. She's looking for complete victories over opponents and any way to hit that point works for her.

For those that do their research, one can find some Weaknesses against some certain maneuvers. A bodyscissors, while relatively easy to escape, Blake will become quite flustered if her opponent is taunting her in this spot and the escape will be hard to focus on. Grabbing her by the hair also tends to freeze her and certainly makes her more docile to set up for something.

Appearance: Personality:
Blake is rather aloof with others though not necessarily out of arrogance (though that does play a part into her attitude), but rather due to her preference to operate alone. She's introvertive, preferring her time to be devoted to more quiet pursuits in life like reading. She believes in improving herself both physically and mentally so that her own ability will be sufficient for whatever challenges she faces.

When those challenges happen, she faces them initially with a calm and reserve manner. Although the circumstances as they develop may change her attitude entirely. She's prone to strong emotion when pushed like anger if she feels threatened. The biggest Achilles' Heel is being mocked and teased, flustering her a great deal to lose her focus. Even a sensual teasing when more reserved will prey on her flustering but when pushed too far, she'll quickly find anger meaning there is juuuust the right amount of getting to her. Somewhere in the vicinity of making her second guess if it was intentional or not. She has her own conflicted emotions about being with another woman, after all...

Beware though, if you anger her you'll probably never get back on her good side. She'll harbor a grudge and at best she'll just not recognize you at all. At worst, she'll be wanting revenge and that means facing a full array of punishments if she ever gets the chance.

Biography:
Blake has had no connection to wrestling in her lineage. Her parents were just wealthy beyond measure from business and law practices in the US. Although the expectations and demands her parents placed on Blake had left her sour to the whole aspect of where she comes from. She had a rebellious streak in her.

Trading the snobby violin and piano lessons for workouts at the gym had been her first act as a teenage. She had to sneak around, of course, but she enjoyed the more active nature of what physical activity offered. Team sports had been her initial entry way but did not like having to cooperate with others especially when they were being difficult. Seeking something that had her work on her own, she discovered a local wrestling league that was more a training avenue for up and comers. She joined.

Operating on her own was far more liberating as she could be her own person. The matches were fun but what she didn't expect was the growing feeling of liking just how it felt to be tangled up with other girls. Men like her father or brothers were a bit brutish but with a girl, they were soft even when they were wrestling. Win or lose, she enjoys it but found that emotion to be complicated. Not wanting to express that, she hardened herself as best as she could and started being hard on herself for losing an attempt to suppress what she considered a rather embarrassing side of herself.

LAW was the natural progression for one that wanted to cut family ties and move onto. She had her name changed to keep her privacy dropping what might connect her to her family name not wanting to be annoyed by that fact. Hayes was the last name of her instructor that had recently deceased at the time and thus named herself to keep on her spirit. Now she is ready to prove herself and discover just how far she could go.
Last edited by 3ho on Sun Jan 17, 2021 4:43 am, edited 2 times in total.
Top
Post Reply
1 post • Page 1 of 1