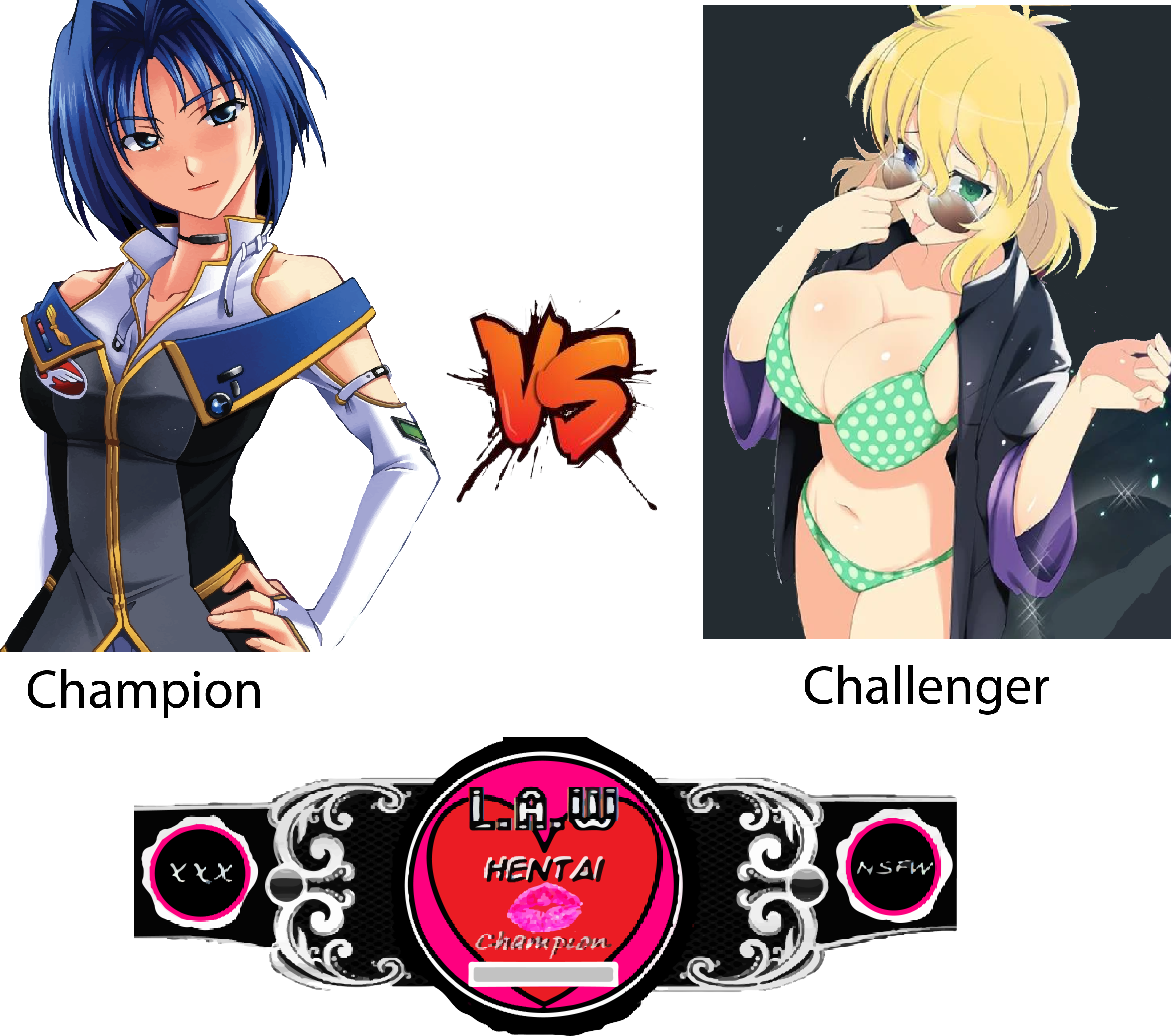 The crowd would begin cheering as the arena was quickly prepared for the next match, obviously being the hentai championship match! However not only would it be this, but the first-ever just deserts match! The cakes, cupcakes, and other sweets were brought out to the ringside, along with the massive pool of chocolate syrup being set up at the top of the rope. Once everything was set up, the girl who had suggested the stipulation would make her way out! Rosy's must began, Rosy coming out with a rather flashy attire, surprisingly covered by a feathered Samba mask, which was paired with her colorful tie-dye coral fleece hooded robe, which counseled the girl's attire for now, but it was obvious this wouldn't last long, shown when Rosy would bend over, giving the crowd a quick glimpse of her backside as she dragged a finger across the chocolate pool, licking it before returning to walking down the ramp.

She would slide in the ring, standing up and the lights going low, Rosy grabbing her robe and undoing it, slowly opening it up, letting the robe fall off her shoulders, sighing as it fell off, the crowd cheering as Rosy showed off her Samba themed attire! 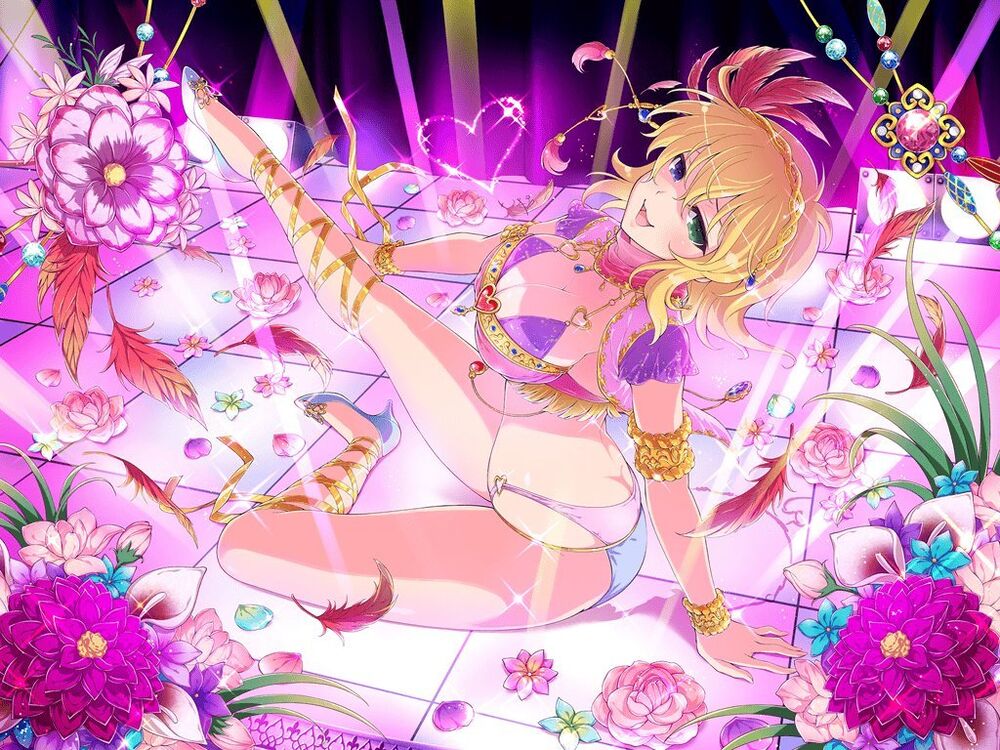 After revealing the purple and gold attire, she would take off her mask, smirking as she revealed her face, tossing the facewear to the side as she posed, caressing her body and smirking, running them up her body before bending over and posing. She was beyond ready to get messy, humming as she kicked off her heels, only wearing them for the sex appeal, waiting for the champion next.
viewtopic.php?f=21&t=4764
My cuties <3

Rei was waiting for this moment ever since she had laid eyes on Rosy and how the blonde force herself on to her and quickly made an impact on Rei and continued to keep the sexual pressure on her, beating Rei at every step in their little game of one-ups womanship and keeping her hot and bothered all the way until this day.

Her first Championship Defense at We Are LAW.

The Champion appeared on stage, wearing a black silk robe with leopard printed linings covering her body beginning to walk her way down the ramp, walking past the tables of sweets and the chocolate pool to the side of the ramp. Already there was plenty of options and sweets for the two of them to use on each other, but Rei kept her eyes on the busty blonde in the ring. The Champion strode up the stairs, stepping between the middle and top rope as she bent forward, the bottom of her robe riding up her butt and showing it off to the crowd as they gave a appreciated cheer.

Entering the ring, she stood across of her Challenger as she gripped the cloth around her waist. "I've been waiting for a long time to get my hands on you...No more running away this time." she let out, pulling the robe apart as the black silk slid off of her shoulders, revealing her Hentai Championship wrapped around her waist.
Smiling she would begin to walk around the ring, taking the belt off of her and holding it above her head as she took very curvy steps around the ring before stopping right in front of Rosy, shoving her breasts into her opponent's and going nose to nose with the Title above her head. "You better be ready for the ride of your life."
Van's Vanity Girls
Top

Rosy would grin watching the champion walk to the ring, biting her lip as she stretched more in the corner, smiling as Rei stared her down, not breaking eye contact with her through the entire entrance, her smile growing as she got a glimpse of her cheeks outlined by her robe. She would walk her disrobe, looking over her body.

She would smile more as the two got chest to chest, staring Rei in the eyes as many cameras would go off, capturing the standoff. "Oh I didn't steal your panties and give everyone a free look at your tit's for a ride on the merry-go-round, you better make me go for a rodeo ride~" She would tease in a low and seductive voice, giving a quick smooch to Rei, seeing if the champ would return it. After this the referee, who was outfitted in a rather skimpy black and white striped one-piece swimsuit (which may or may not have been requested by Reyes) would get between the pair, telling them to go to their corners.

The fans were already being sent into a frenzy with both ladies stripping down into their skimp swimsuits, Rei wearing her iconic gold almost slingshot bikini that clung tightly to her body with her Championship held above her head. Neither woman was backing down from the other as they stood breasts mashed against each other. THe sexual tension between the two of them had not wane since the last time they met and it only seemed to get more and more with each passing second before the bell rang.

The referee girl did her job, or rather tried to do it to the best of her abilities, trying to squeeze between Champion and Challenger to separate them as Rei stepped back, heading towards her side of the ring as she kept her eyes locked on her Challenger.

She watched as Rosy teased with the referee, holding her head and pulling it into her chest as Rei narrowed her eyes, she could easily see what Rosy was trying to do, still get underneath her skin. But rather than try to resit, since their moment of sexy was upon them, she decided to play that game as well as a smile curled on her lips as the referee embarrassingly made her way to Rei to procure her title.

Rei handed off the title with no resistance but she would quickly wrap her arms around the referee's head as well, pulling the referee again into another faceful of breasts. All the while the Champion had her eyes locked on Rosy while holding the referee girl's face before letting go, allowing her to finally raise the prize they were fighting for above her head, soon calling for the bell!

Rei was anxious to get her hands on Rosy, but she wasn't going to rush in like a rookie, she kept her distance as she still had little idea what really Rosy came packing with, circling the ring and her opponent.
Van's Vanity Girls
Top

Rosy would smirk, her tongue still out as Rei smothered the referee who would gasp stumbling back and raising the title over their head. They would then call the bell, rubbing their face to get the feeling of the pairs of boobies she had on her face.

Rosy meanwhile would slowly walk around the ring, acting rather causally as she did, humming and twirling her hips, before then suddenly attempting to go for a lock-up. If they did, Rosy would attempt to push Rei into the ropes, holding her there before breaking up the lock-up and seemingly pulling her hand up to slap her boobs, but if Rei went to block her chest, she would instead lean in a kiss the girl's cheek, before backing up, playing more mind games with the champ.

If Rei didn't block her chest she would instead grab the girl's chest, groping her boobs, teasing her while they were on the ropes. If this was the case she would squeeze her boobs smirking "Mine are bigger but you got a nice pair champ~"
Last edited by SweetHeart on Sat Dec 26, 2020 1:14 am, edited 1 time in total.
viewtopic.php?f=21&t=4764
My cuties <3

Everyone was waiting for this moment after weeks of build up and teasing from both women, although more in Rosy’s favor, having successfully gotten underneath Rei’s skin with her arousing nature. The tension was already at a high as both Challenger and Champion circled each other, like two apex predators seeking to assert their dominance over the other.

The stand off was broken when the pair dived at each other, locking up in a collar and elbow tie up with both women shoving into each other. Rei would be the first to show weakness, despite pushing back against her younger opponent, she was the first to step back step after step before the room behind her was suddenly gone and replaced with the ropes pressing into her body, forcing her to stand up.

Rosy would use this advantage to break the hold, her hands quickly grabbing on to Rei’s breasts as the Champion let out a groan, trying to mask her moans as Rosy squeezed on them. “Don’t...get cocky!” She gasped out, her now free hands attempting to shoot right back and grab onto those massive pairs of Rosy!
Van's Vanity Girls
Top

"Oh come on you think it's gonna be that easy?" She teased, leaning in closer and drag her tongue across the girl's neck. "Moan for me~" She whispered, trying to at least get the girl to squeal out as she leaned on her body while she groped her boobs, biting down gently on her neck, hoping this would distract her enough for her to suddenly spin around, tripping her down with a massive boob holding STO!

If this worked she would attempt to jump onto the girl' lap, still groping her chest as she would hump her lap, showing no signs of going easy on the girl. "Told you I would test your limits miss champion~, hope you're not gonna give up just yet~." She giggles seeing how Rei was handling the groping
viewtopic.php?f=21&t=4764
My cuties <3

Rei’s body started tingling when she felt that wet member sliding across of her neck, another groan escaping her lips as she refused to let her Challenger dictate the pace and refusing to give in to her demands as her body pressed harder against Rei’s, squishing their mostly exposed skin together. Rei attempted to show any form of resistance by squeezing back at Rosy’s pair but her opponent seemed unaffected with such a display when she was pressing forward with a much more forceful display.

Rei flinched when the teeth sunk into her neck, it was gently but it was still shock worthy as Rosy pushed into her tits, sweeping her leg from behind as Rei was sent flying to the mat! Crashing back first in a not so soft way, Rei cried out as she laid on the mat with Rosy quickly sitting on top of her, grinding their crotches together as she still had a hold on her breasts!

This time Rei was unable to hold back her moans as she let out, trapped underneath Rosy as she tried to quickly rebound, her hands shooting up again to grab onto Rosy’s breasts! “This is only the beginning!”
Van's Vanity Girls
Top

Rosy would bite her lip, moaning as the girl gripped her chest more, grinning a pervy smile "Can you say anything more generic?" She teased, bouncing on the girl's lap more, before attempting to escape the hold, instead rolling out of the ring, going to the table of sweets! If she was able to get out, she'd pick up a pie, attempting to slide it into the ring, along with grabbing a cupcake.

She would slide back in grinning, holding the cupcake attempting to lift Rei to her feet with one hand, open to attacks but if it worked, she'd take the chance to shove the cake into the girl's mouth, forcefeeding it to her.
viewtopic.php?f=21&t=4764
My cuties <3