"Yes, hello and welcome one and all to the most informative place for wrestling reviews, responses and reactions on the internet- Kieda's Corner! I am your humble host, Kieda Uzai, and tonight we have quite the peculiar little topic up for discussion- The tenacious, the fierce, and all around most resilient individuals that law has ever produced. So! Sit back, relax and countdown along with me as we go over some of the more tougher performers in the company~"

"Don't let this petite pulverizer's size fool you- She'll crack you across your dome for looking at her the wrong way, and probably sing a jaunty tune while doing so. While I can't personally speak on her abilities between the ropes, she's gone toe to toe with my personal confidant Jess, and somehow managed to emerge victorious~" 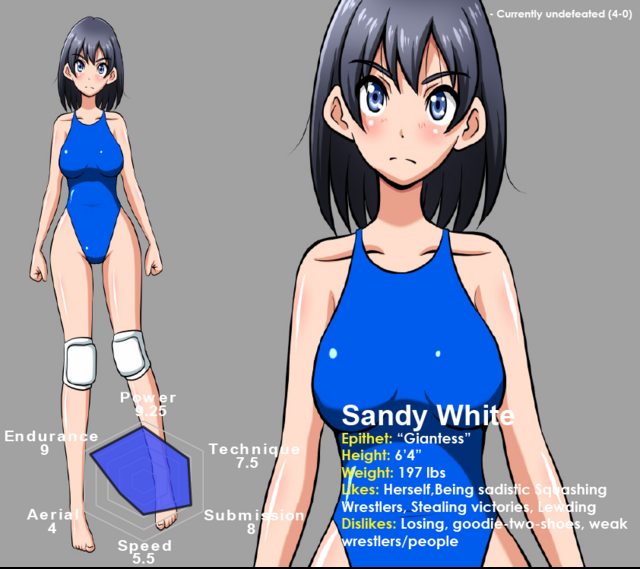 "Large, menacing and never in a good mood Sandy is the type of woman that would either send chills down your spine or a tremor of fear through your heart- or potentially both, depending on what gets you going. Lex once tried to step up to Sandy on one of her more irritable days, and let's just say he was given a show that he won't soon forget~"

"Yes, yes, I know- She and I are eternal rivals, and while I genuinely abhor her with every fiber of my being, she's helped take my wrestling career to new heights with her brilliant performances. Of course, I inevitably got the better of her, but that didn't stop her from devoting every ounce of expendable energy she had into proving me otherwise~"

"I mean, what do I even need to say about this gargantuan monster that her intimidating figure and baleful stare can't? What's even scarier is that she has the capacity to fly around the ring as if she were weightless. I swear, there were a handful of times I caught her curling Lex in one arm and Cobra in the other as a recreational activity- How on earth is that even humanly possible?!"

Humungous- Check. Southern- Check. Can capsize a car if the mood strikes her- Check. Take it from me- If you had the option of either fighting Jess or running directly into a stampede of runaway bulls, I highly advise the second option: At least they won't sexually ravage you while they trample over your body."

"Not only is she much stronger than she appears, but Gail is a virtuoso of a myriad of submission holds, all while sporting a rather stylish ensemble to go along with it- Not that I'm advocating her tendencies or anything, but a fashionista like myself has to give credit where credit is due~" 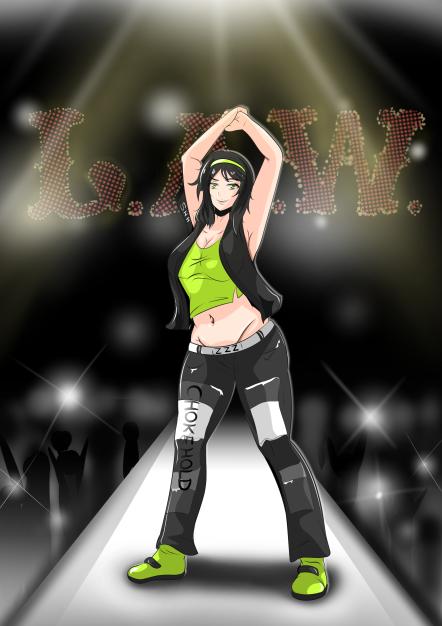 "Why do the cute ones always have to be so susceptible to corruption? Well, whatever the case may be, ever since her dramatic heel turn with the assistance of her mentor Gail, Mariza's been on a frightening winning streak, and doesn't appear to be showing any signs of stopping. I'm both happy that she's discovered a niche for herself, but I wish it wasn't through acting so crass."

"Well, that's all the time we have for today. If you have any comments or suggestions pertaining to these lists, I'm always open to constructive criticism. Until then, this is the one and only Fashion Assassin signing off~"
Peace out- Nobody use My OC's for anything.
Single Competitors:
Bianca, the "Queen Bee"
Kieda, the "Fashion Assassin"
Jess, the "Ginger Titan"
Lex, the "Self-Appointed Genius"
Agatha the "Scandinavian Sledgehammer"
Gambit "The Raging Cajun" Rio
Gail "Terrifying Tornado" Whitaker
Zetta "The Fiery Phoenix" Quinn
Mauna "The Hawaiian Hulk" Loa
Tess "The Aviator" Schroder
Trent "Cobra Bolt" Sanders
Ikiala "The Rampaging Force" Loa
Claudia "The Hellhound" Kwon