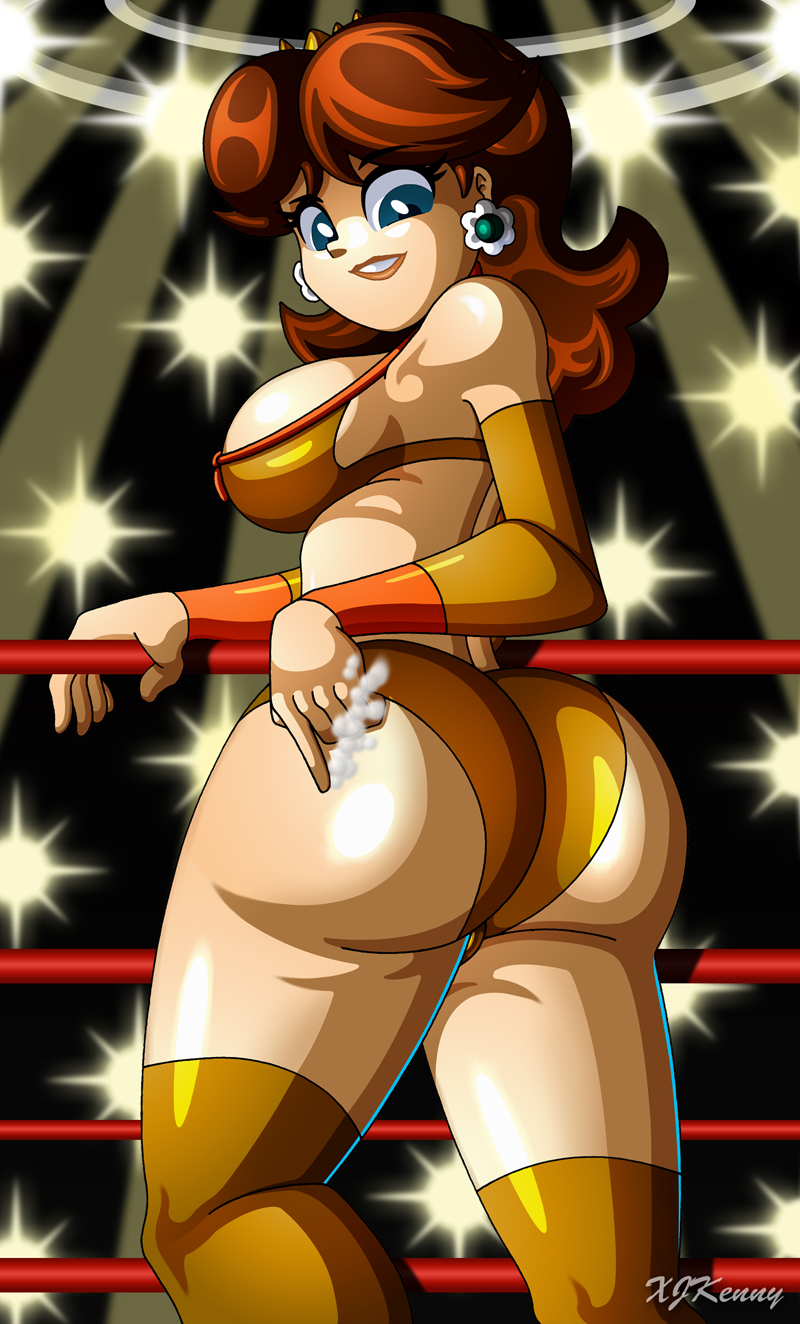 
Hi, I’m Daisy! Don’t take it personally when I kick your butt, then turn your face into a throne for my royal booty! Hehe...


History: Daisy Petals is the princess of a great nation, known as Kingdom Chrysanthemum. It's a nation with an abundance of vegetation, particularly known for its beautiful flower gardens! Though she adores being The Princess of Flowers, ruling over the prestigious kingdom still takes its toll on Princess Daisy, as she has little patience for the less exciting parts of her job.

Looking for an outlet to relieve stress, the monarch would first try boxing and kickboxing. She would develop superb striking skills from these sports, but would eventually find herself settling on pro wrestling! And Ms. Petals found that she was quite good at it, eventually becoming an even more amazing Striker. She'd develop a reputation for pummeling opponents senseless, beating the crap out of them until they go down. And after extensive training of her already tight glute muscles, she would develop an even more formidable backside. Adding to her arsenal, to include as many booty moves as possible! Dishing out beating after beating, smother after smother, she would finally gain enough recognition to join LAW! Where she would become known for having foes at the mercy of her hiney, earning her the title of: The Booty Bomber!

Personality: Miss Petals is sassy, confident, lively, tomboyish, spunky, bubbly and competitive. She's also relatively kind, and most trash talking and taunting she does is all in good fun, though the victims of her beatings don't always appreciate it! Despite her compassionate side, Daisy is a merciless wrestler, often leaving her opponents with bruises and black eyes from her punches, before smothering them out with her plump glutes! The princess takes great pride in her posterior, constantly working out to add more and more muscle mass to her greatest asset! She also can be somewhat sadistic. When butt smothering opponents, Daisy often allows her foes brief moments of air, before doing more work on them with her toned tushy! This is all just for prolonging the fun she's having, not giving her victims the grace of a quick trip to dreamland, leaving them doomed to suffer more under her deadly derriere!

Wrestling Style: Lots of painful strikes combined with booty moves! Punches, kicks, knees, elbows, butt bumps, and hip attacks alike! Her most famous strike, being a powerful hip/butt attack that she calls the Daisy Bomber. After her opponents are bruised and worn down, she will then switch to smothering them senseless with stinkfaces and facesits, vanquishing her poor foes under her large, plump booty! Leaving many with a lasting fear of her fanny! Daisy will often physically tease her rivals by shaking and/or slapping her butt. She may also taunt by licking her finger right before bringing it down to touch her smoking hot buns! These are usually the only chances weaker opponents get to catch her off guard!


Petal Pummel - A barrage of painful punches to a cornered victim's face, belly, chest, and shoulders. Often followed by a dizzying stinkface, if the foe falls into a seated position.


Daisy's Dungeon- When her foe is in a seated position, Princess Petals with start by maneuvering her legs around them. She will hook her legs on their legs, and she will grab their wrists. She will then take her foe to the ground, while flipping the victim up. When it is all said and done, the victim's legs will be painfully spread by Daisy's own, their arms will be restrained as Daisy keeps her hold on them, and the back of the foe's head will be stuck on her big booty. If the foe doesn't submit, Daisy will add to the submission move. She will slip with booty tights down under her prisoner's head, before yanking her bottoms up over their face! (Move suggested by AliceBun)


Any and all other kinds of punches, kicks, elbow strikes, knee strikes, and booty moves.

Stats
Power: 4/5 - Very strong. Real power behind her fists, feet, and well, behind.
Speed: 3/5 - Average speed. Able to dodge most attacks that she sees coming.
Stamina: 5/5 - Extreme endurance! Opponents have much trouble wearing her down, before succumbing to her painful assaults, and "breathtaking" butt smothers.
Courage: 4/5 - Very brave. Only the strongest of foes may intimate her a little, before she immediately shakes it off.
Intelligence: 3/5 - Average intellect. Smart enough to strategize quickly, though normally let's her body think for her.
Defense: 4/5 - Very defensive. Has the blocking and countering skills of a trained boxer.
Great Wrestling Skill 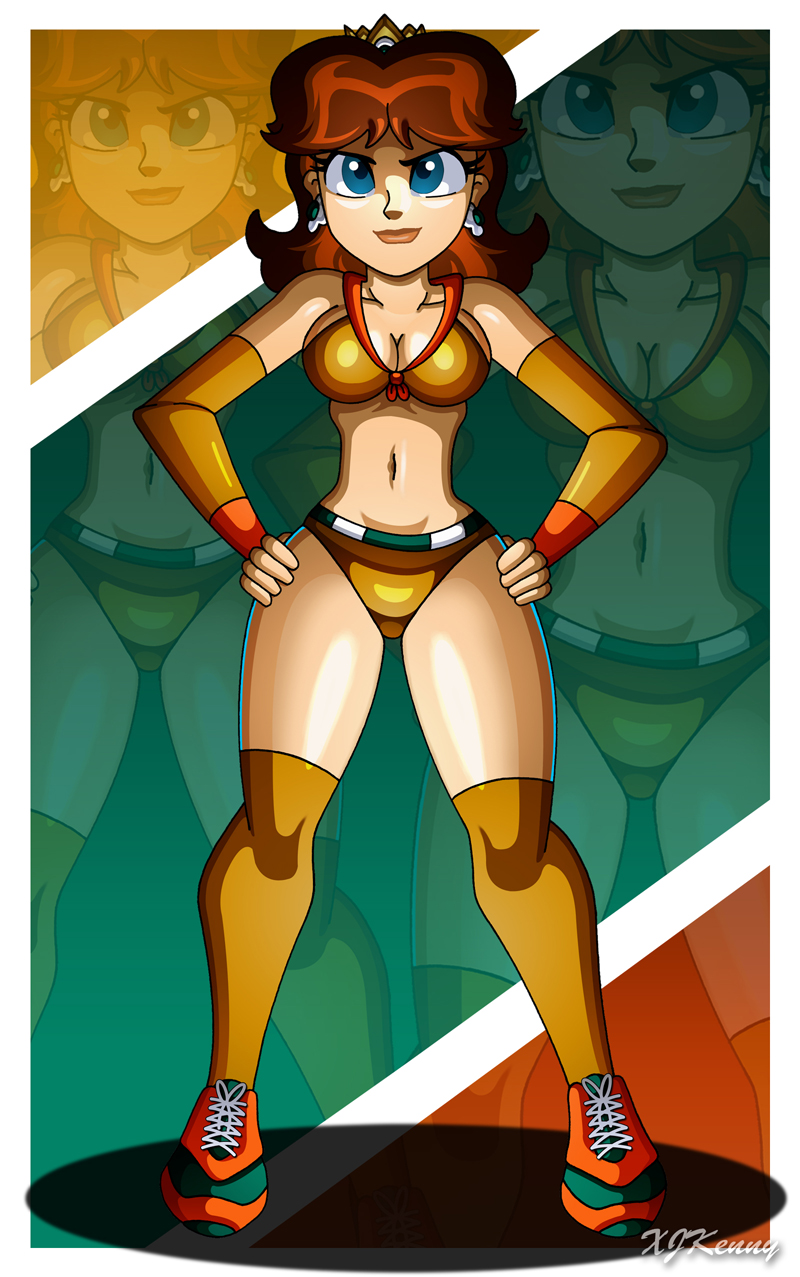