The St. Cross Sisters vs The Ashford Sisters

The St. Cross Sisters vs The Ashford Sisters

Standard Tag Match: Victory to be determined via pin-fall, submission, knockout, count out, or disqualification 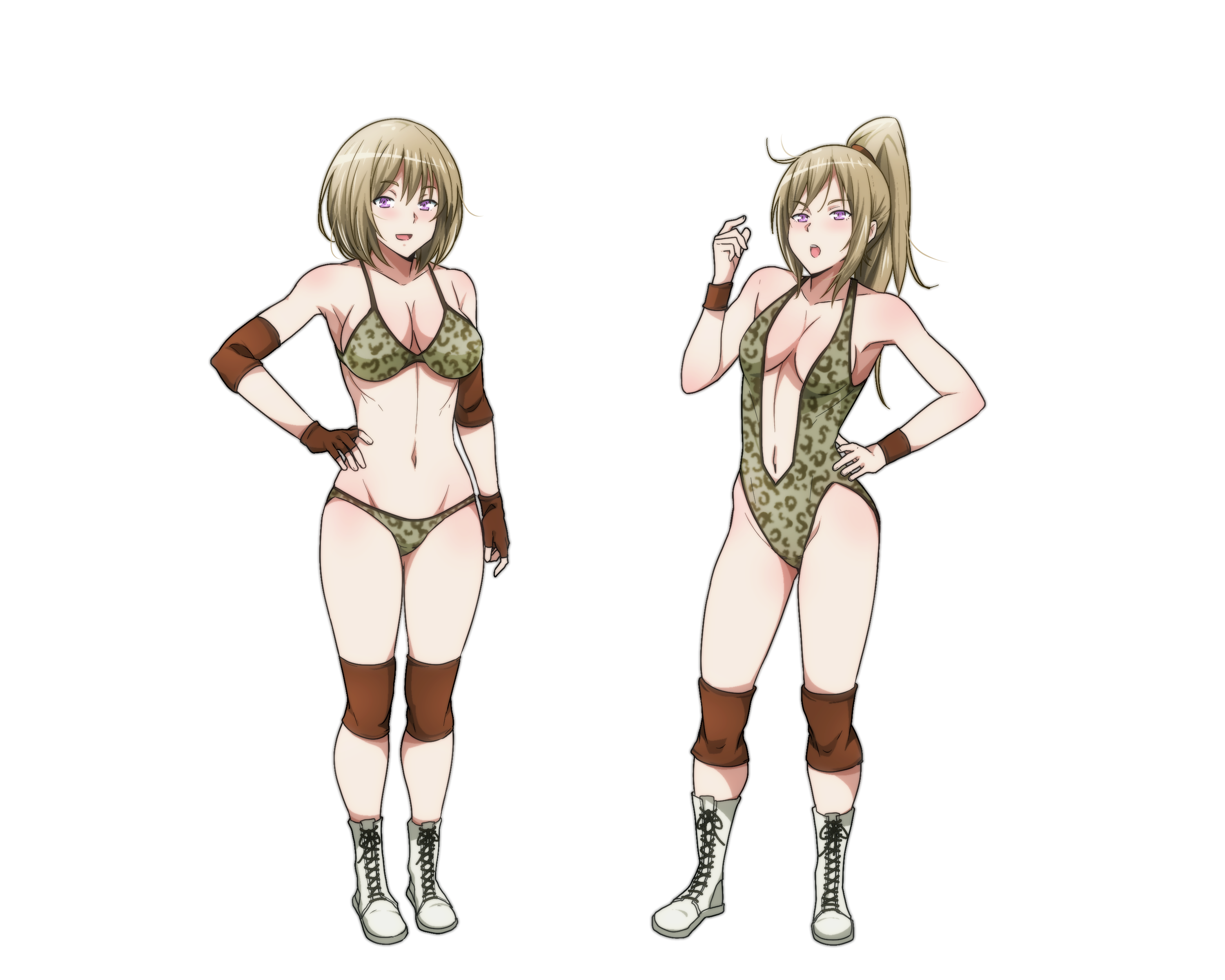 This was their first PPV appearance, and while their match was located rather low down the card, the sisters would take whatever they could get from this. After all, everyone had to start from the bottom, after all. Also, it helped that they got themselves a new theme song for them, which made them rather stoked for their match. Both Mara and Toni were at the locker room, anxiously waiting for their turn to make their entrance.

Mara smiled at her little sister and nodded. "Yeah. Let's do our best and show them all..."

Bumping their fists together for one last time, the Ashford Sisters then made their way out of the locker room to the gorilla position. Soon, their new theme, Rog-limitation, was played, and they made their way out to the ramp. They received mixed reactions from the crowd, but the sisters made their way down the ram, heading over to the ring. Mara waved at the crowd while Toni scoffed at them, glaring at random directions as they moved.
The one with bob hairstyle and clad in leopard-print two-piece outfit was Mara while the ponytailed one clad in leotard was Toni. Once they reached the ring, they climbed up the apron before slipping through the ropes. They once again bumped their fists with each other before they started stretching as they were waiting for their opponents for the night to arrive. From what they had heard, they would be facing a team of sisters as well, at least that was what they assumed, judging from the other team's name.

Once they were done warming up, both sisters looked at the direction of the entrance, waiting for the other team to show up. Whoever they were, they were ready to face them.
PrinceArjuna's Roster
Top

The St.Cross sisters were in the back ready and eager for their first ppv match and it was against another pair of sisters from a rather prominent wrestling family no less. Doing their final stretches in the back, their music hit and the St.Cross sisters made their way to the ring with the youngest, Chloe (brunette) leading the charge while the oldest, Marie (blonde) followed suit. Both women entered the ring and and walked towards the center, facing off with the Ashfords.

"We've heard a lot about you two. People say that the two of you can provide a challenge." Chloe said, hands behind her back and she leaned towards Toni playfully.

"It will be interesting to see if how long you can last before we turn you two into human pretzels." Marie chimed in, crossing her arms under her buxom chest as she grinned towards Mara.
Come Witness the Order viewtopic.php?f=21&t=3341
Top

The sisters waited for their opponents to show up, and when they finally showed up, they could see that these two women were very much bigger than them, though that shouldn't be a problem to them. Whoever they had to face tonight, they would make sure to defeat them and leave the ring with a well-earned victory.

With both Saint Cross Sisters making their way to the center of the ring, the Ashfords would also do the same before they had a little bit of staredown. Toni looked up to see the face of Chloe while Mara placed her hands on her hips as she looked at Marie's. As Toni smirked confidently while folding her arms under her breasts, Mara showed her typical serene smile.

"Oh yeah? Well, you're gonna learn that we're more than just a challenge to ya..." Toni replied back with her usual cocksure attitude.

"Pretzel sounds delicious," Mara chimed in. "Kidding aside, hope you two are ready. My sister and I aren't going to lose that easy..." she said, still retaining her smile.

And so, both the Ashfords stepped back and looked at each other. They bumped fist for one last time before Mara slipped out to the apron while Toni stayed, being the first one to go. She would wait to see which one of their opponents would face her at the start of the match, and she would also wait for the referee to get the match started.
PrinceArjuna's Roster
Top

The sisters returned to their corners as well to do some last minute stretching. Seeing that Toni was staying in the ring, Chloe opted to be the one to start the match on her side. The bell rang and Chloe moved towards Toni with her arms raised in a fighting stance and a grin on her face. She decided to make the first move by throwing a kick to Toni's left leg.
Come Witness the Order viewtopic.php?f=21&t=3341
Top

Toni would be facing Chloe, and she watched her carefully. But instead of locking up, Chloe decided to deliver a kick at her left leg, and Toni hissed in pain. Struggling to retain her footing, Toni would try to retaliate with a forearm smash right across her breasts, hoping to stun her opponent with the strike. She would favor her right leg due to her left leg still hurting from the kick that she received from her opponent. She knew that she was in a disadvantageous position before Chloe due to her smaller size.
PrinceArjuna's Roster
Top

Chloe knew she landed a direct hit on Toni's leg as the younger Ashford sister was now reeling. The forearm was anticipated and Chloe countered by catching Toni's arm and looked to toss her over the shoulder to slam her onto the mat.
Come Witness the Order viewtopic.php?f=21&t=3341
Top

Toni attempted to hit Chloe with a forearm smash, but her arm was caught. Unable to react on time, Toni ended up being tossed over her opponent's shoulder before hitting the mat.

Toni grunted in pain upon landing. Still, she wouldn't let it stop her from fighting back as she would try to get herself back onto her knees as quickly as possible, hoping to recover and regain her bearing before Chloe could continue with her next attack.
PrinceArjuna's Roster
Top

Chloe saw Toni get back up and that just wouldn't do. Before Toni had a chance stand, Chloe rushed the Youngest Ashford with a stiff knee to the face to bring her back down, all while she could hear Marie cheering from the corner.
Come Witness the Order viewtopic.php?f=21&t=3341
Top

As Toni tried to push herself up, Chloe was already making her next move, rushing towards her. Before Toni could prepare herself, she took a knee right to her face.

Toni fell backwards as she took the stiff knee to her face. Landing on her back, she brought her hands onto her face, writhing in pain. From the look of it, she was helpless before her opponent, who was free to continue with her assault.

Meanwhile, Mara was watching from her corner, clutching onto the top rope. She was worried as she looked at her sister clutching her face, and she hoped that she would be fine there.
PrinceArjuna's Roster
Top
Post Reply
59 posts