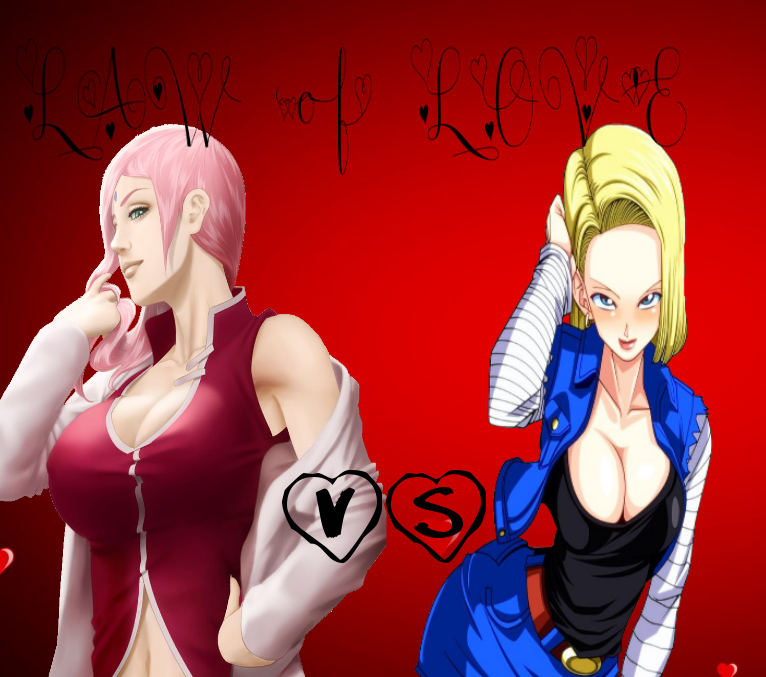 The reaction she got from the fans was amazing as the blond would walk to the ring while every few seconds turning around to wave at the fans as they went nuts at seeing her breasts jiggle , but not being exposed yet at this time. When she was halfway down the ramp she would hear the announcer say 'now entering the ring from Orlando , Florida.Weighing in at 146ibs,It's Brianna Avis'' as she stepped into the ring to wit for the arrival of this so called animal girl.

The crowd was cheering for the blond way too much, it made Sakura think that she was the villain here... Sakura wondered how will they like to hear Brianna moaning. Sakura's fantasizing about how she's going to dominate that woman on that big bed was interrupted by a staff member who told her that it was her cue.
Sakura's music started to play as the pinkette made her way straight to the ring. There were some cheers for the ex-ninja, but certainly not as much as for the blond. It was the first time people were seeing her in LAW anyway. Not to worry, Sakura was sure as hell going to make an impact now and the hoe in the ring was going to feel it and embrace it. Coming in next, from the Village Hidden in the leaves, Japan, Weighing in at ''Say it and I will kill you'', let me introduce you to the pink-haired ex-kunoichi, Sakura Haruno! The crowd started to laugh at the introduction.

Sakura slid into the ring under the ropes and there was a giant bed on the ring, there was barely any room to stand, so Sakura just got onto the bed and made her way toward her tonight's opponent on all fours. Yo, how are you doing? If you're going to be a good girl, I'll let you feel how it's like in heaven. Sakura started unzipping her jacket and took it off after saying hello to her opponent. So how about it? Will you take it off yourself, or will I have to help you out with that? Sakura would ask as she would point her finger at at the blonde's shirt that was half taken off, half-not. Many whistles were heard as the people enjoyed the sight of Sakura undressing.
Sloth's Harem
Top

As she would growl as the other woman would mock her by asking if she was going to be a good girl.As she would be rewarded in pleasure as the brute would make her feel good.As in the blond's opinion the other woman did not have a clue what to do with another woman''s body let alone a man's body to make them experience pleasure like never before.However it became laughable when she was called out on her attire as she would look down to her own , and then to what Sakura was wearing as she replied back ''honey if I am to remove my top then you got to remove your bra.Secondly mind taking off your pants as you got on way more then I do so how about you undress first , and then I will show the crowd what a real woman looks like as I take my clothes off.''
Anime-hentaifighter present the female wrestling talent

As Sakura faced her opponent eye to eye now and was taking off her jacket, a few thoughts were running in her head. She was fairly certain she could beat up this woman in a fight no problem, but Sakura wanted to defeat her in the sensual part of the competition. She wanted to dominate this milf and prove to her who's the alpha female around here. Last time was just a warmup, where both of them had a draw, but this was different - it was about which woman can endure it for longer and Sakura was known for her stubbornness.

When Brianna said that Sakura was still overdressed for the match, Sakura looked down to her legs and the blond was right. It seems that you are right, give me a moment to un-pants myself. Sakura would do as she said and take off her pants and sandals and throw all of her attire over to the ref's direction, who would pick it up and place it somewhere safe. Sakura would still be wearing her underwear and a bra. This will do for now, If I'll consider you overdressed at any point - do not worry, I've got you covered. Sakura would say as she thought that there should be something left to rip off her opponent.

Brianna had wondered how the pinkette would responds to her words as she expected the other wrestler to get mad.As while the blond may have had an point she doubted her opponent would agree with her words.So it was an surprise when Sakura would actually agree with her , and then remove her pants as this left both wrestlers in their underwear and a bra.However when the pinkette would then say that she was still overdressed at this point got the American to smirk.

As she would remove her wrist cuffs as she drops them to the canvas as she replied ''you had an point , and now were even.So can we please start this farce of an match as I got better things to do then waste my time forcing you to cum again and again like the pathetic wannabe you are.As brutes like you don't belong on this kind of event Sakura'' just as the bell would ring.Hearing that the blond would keep her distance as she got her guard up as she would for now just await her opponent's first move.
Anime-hentaifighter present the female wrestling talent

People usually do the undressing in the locker rooms, but this time it was different. The milfs (mostly Sakura) were doing the undressing inside the ring, on top of a giant bed, in front of thousands of people who were whistling and shouting all sorts of weird stuff.

After the bell would ring, Sakura would meet her opponent with her hands raised, inviting her opponent for a lockup. Sakura was certain that she could overpower the blonde and planned to subdue her physically first and then do whatever she wanted with her.
Sloth's Harem
Top

The fans had enjoyed watching the MILFS or more accurate Sakura strip down.As like the blond had said she was already as undressed as she could without being naked.As she had only removed her wrist cuffs while her opponent had removed a lot more as she waited for her opponent to make the first move.

As once the referee had called for the bell the blond would get in one more remark as Sakura did not take that well.As she would reply back that just because the pinkette was the better fighter that she was not worse in bed then Brianna.Which sadly was the case in the eyes of the blond as she would meet her opponent in the center of the bed as she would push her breasts against Sakura's own as her hands entwine with Sakura's as she would whisper ''but that just the truth pinky.So why can't you accept it'.
Anime-hentaifighter present the female wrestling talent

The bell had rung and Sakura met her opponent in the middle of the bed, entwined their hands and fingers tightly. This was just what Sakura wanted, Brianna falling right into the pinkette's game, unless the former seriously thought that she could overpower the rough ex-ninja. Well, if that's the case, then the blondie was in for a surprise.

The bodies of the two women touched sensually once again, it was as if they were attracted to one another. Sakura would start increasing her pushing force against her opponent's body and mashing them tighter until hopefully Sakura would overpower her foe and push her backward. Maybe physical power wasn't the most important thing in such a match, but if Sakura had that, then why not use it to her advantage? Because it ended in a draw last time and if you already forgot that, then I'm going to remind you by beating you at your own game. Sakura would say as she would continue to increase the force in the push and mash their bodies tighter and tighter. If Brianna was unable to keep up, then she would be pushed back.
And nngh. Did you really think you could overpower me? I'm not complaining tho, as I'm always up for a challenge. Gh.
Sloth's Harem
Top

As the two wrestlers meet in the middle of the bed as their fingers were entwined as they held onto the other tightly for now.As the blond did not plan on staying locked up with her opponent for long as her breasts would rub and grind against the pinkette's own.As she had to admit that she was not as small in the breast department then she first thought.Now this did not mean Sakura was in her league , but she was not as small as the American had taunted her to be when they meet in the gym.

So when she heard the pinkete saying it only ended as an draw last time well it made her more determined to make sure it would not happen this time.As she hoped to prove this was untrue as she felt Sakura's body press against her own as she would meet Sakura head on as she replied ''I could easily overpower you pinky as your in my yard now''
Anime-hentaifighter present the female wrestling talent

Return to “Laws of Love”