Demona sat there in a seemingly slumped position as Sakura charged her position. And much as Sakura seemed to suspect the explosion was far from enough to keep the demon down as her eyes shot open as Sakura charged with the aim to punch her with one of those monstrous strikes.

SpoilerShow
[image=]https://66.media.tumblr.com/aaca96d3609 ... lh_500.gif[/image]
Demona's dark fist enlarged once more as she jumped forward just as Sakura closed in and reared back her demonic fist as she aimed to meet force with what she presumed was greater force. And tried to smack Sakura's fist and by extension Sakura with her enlarged demonic swipe.

Regardless of which force would prevail, the area was about to be shocked with violent force once more.
Godjacob's Elite Four
Top

Sakura sped towards Demona, who started moving even before Sakura got close enough to punch. The two powerful women met fist to fist once again, sending another devastating shockwave through the land, smashing through the rocks behind Demona and making the whole thing cave in.

Sakura was annoyed that they canceled other other out again. Sakura just wanted to get in close and punch Demona in her smug, nonchalant face. Those were Sakura's thoughts as they momentarily stopped each others momentum. Aah! Sakura yelped in surprise when she actually got overpowered this time. Sakura was swept backwards into the air, but she balanced herself with a backflip mid air and threw a few kunai knives at Demona that each had a paperbomb attached to them and the fuse was already lit, so even if Demona dodged them, they'd still explode next to her.
SpoilerShow

Sakura then landed on the ground and assumed her fighting stance. Is that all you've got? Come on! Sakura would taunt her opponent and stay on the defensive stance. Sakura would try to lure Demona into close combat. Sakura was getting tired of every time engaging where their fists meet and blow them backwards.
SpoilerShow 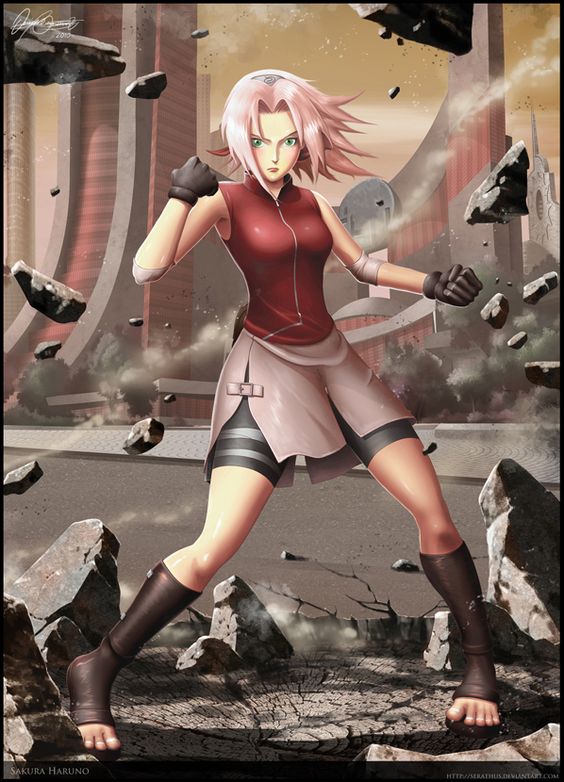 Demona had been able to overpower and push the human back in the exchange, but she was unable to do any noticable damage and more alarmingly as her darkness fist returned to normal size she felt some sting from the force of the blow. Her strength was troublesome to say the least.

And as Sakura was forced back, she revealed a few more tricks as she tossed several projectile knives her way.

Demona half considered a direct charge, though given this girl has some sort of explosives or some other tricks with her seemingly conventional moves she decided to not bother with the flying projectiles and instead tried a new tactic.

SpoilerShow
[image=]https://media3.giphy.com/media/zHWagT9ufk4zC/giphy.gif[/image]
Demon would crack the ground beneath her as she jumped up high in the air, where the kunai would fly underneath her as she glanced down at Sakura's position. From her position in the sky, she'd use the boost of the jump combined with gravity to handle the rest as she would descend down and aim to drop down with another diving kick attempt on the kunoichi below.
Godjacob's Elite Four
Top

Sakura felt a little sting in her right fist from the clashes, but she just grit her teeth and ignored the little inconvenience.
Sakura's kunais were easily evaded. She thought that maybe the explosions would nick Demona, but the devil lady leaped up into the air high where the explosions had no power there. Sakura saw the demon falling at her with a kick.

Since this was the velocity of a falling woman, Sakura had more than enough time to react - she would flips backwards before Demona's foot could connect with her. After finishing her backflip, Sakura would rush back in at her opponent, who just landed feet first into the ground less than a moment ago, making small ruptures in the ground.
SpoilerShow

When her opponent was in reach, Sakura would send a meaty right uppercut aimed at Demona's solid abs.
Last edited by ragaz on Tue Oct 08, 2019 11:05 am, edited 1 time in total.
Sloth's Harem
SpoilerShow
viewtopic.php?f=21&t=2237
Top

Demona landed on the ground with a violent thud, as the force of it split the ground and created a rumble as her kick landed on the area with devastating force. However, all it amounted to was some kicked up dirt & rocks as Sakura had easily been able to avoid her blow and not only that but charged ready for a counter strike.

SpoilerShow
[image=][/image]
Demona managed to get an x-guard up just before Sakura's punch could slam into her gut, but while that protected her from the bulk of the damage the sheer force of this superhuman was enough to send Demona flying back as her feet kicked along the ground as she tried to grind her momentum to a stop while her arms felt the sting of the punch in her arms as she eventually came to a stop.
Godjacob's Elite Four
Top

Sakura evaded the demon falling onto her and responded with a punch of her own, but sadly, Sakura only hit Demona's arms, sending the blonde menace flying into the distance.

Immediately after the punch landed, Sakura rushed after her opponent with an intent to uppercut Demona in the stomach in hopes to send her airborne. If that worked, Sakura would jump after her opponent and would finish things off with a mighty chakra-filled punch from above. Chhaaaa!!
Last edited by ragaz on Wed Oct 23, 2019 3:48 pm, edited 1 time in total.
Sloth's Harem
SpoilerShow
viewtopic.php?f=21&t=2237
Top

As Demona's heel dug into the ground to come to a stop, it seemed this girl had been in no position to try and give her breathing room as Sakura charged ahead and aimed to try and slam that monster fist into her to deliver an uppercut.

However, before her blow could connect, the fist passed through "Demona's" body as it revealed itself an after image. And she used her maximum speed to flank the kunoichi as she aimed to try and attack her from behind.

Demona would spin to build momentum and tried to strike with a spinning back kick aimed for Sakura's back.
Godjacob's Elite Four
Top

Sakura's fist went right through Demona's stomach that turned to be just air... Sakura yelped as her eyes went wide and she realized that Demona had her there...

Aaghhr! Sakura grunted and crashed front first into the ground, skidding through it. Rgh... Sakura would quickly start getting up in hopes that she could do something about the follow up attacks.
Sloth's Harem
SpoilerShow
viewtopic.php?f=21&t=2237
Top

Demona saw Sakura as she tried to quickly get up before she could strike, but Demona had no interest in letting the girl have her way. With a hurry she rushed over to Sakura as she aimed to try and stomp down on the kunoichi's back with the goal to try and pin her to the ground
Godjacob's Elite Four
Top

Sakura messed up and now she was on the ground. While she tried to get up in a hurry, she was prevented from doing that by Demona stomping her back to the ground. Ghhr! Sakura groaned in annoyance more than anything, it was frustrating to be dominated by a nude woman like that and it seemed like the blonde was trying to rub this very thing in.

Gh! Don't underestimate me! Sakura exclaimed in anger as she grit her teeth and started forcing her way up off the ground despite the foot of her opponent. Using both hands and legs, Sakura would be rising up slowly.
Sloth's Harem
SpoilerShow
viewtopic.php?f=21&t=2237
Top
Post Reply
45 posts