Catch-all forum for everywhere outside of LAW. State the location in the first post. You can have your beach/bed/apartment matches and more, here.
Post Reply
First unread post • 49 posts 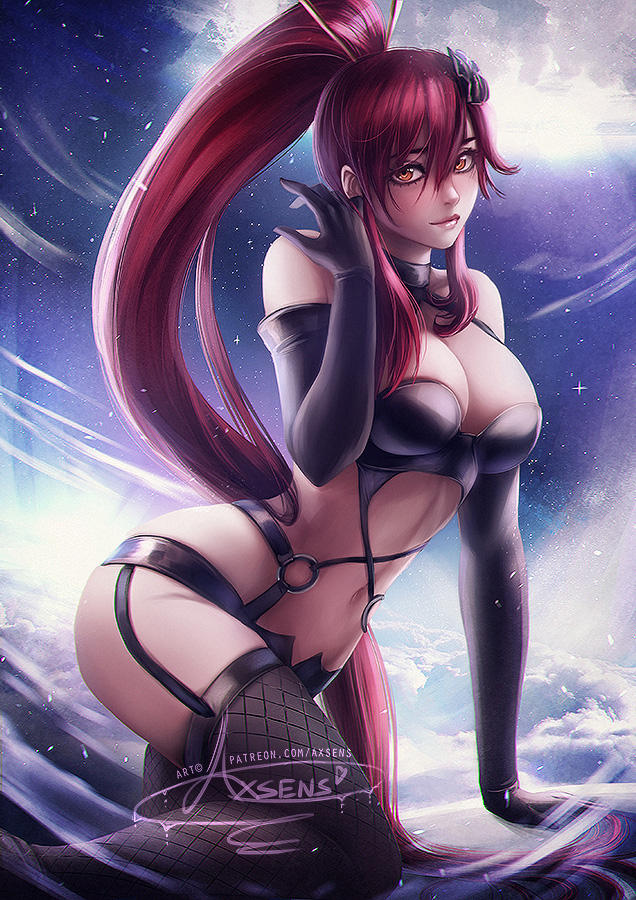 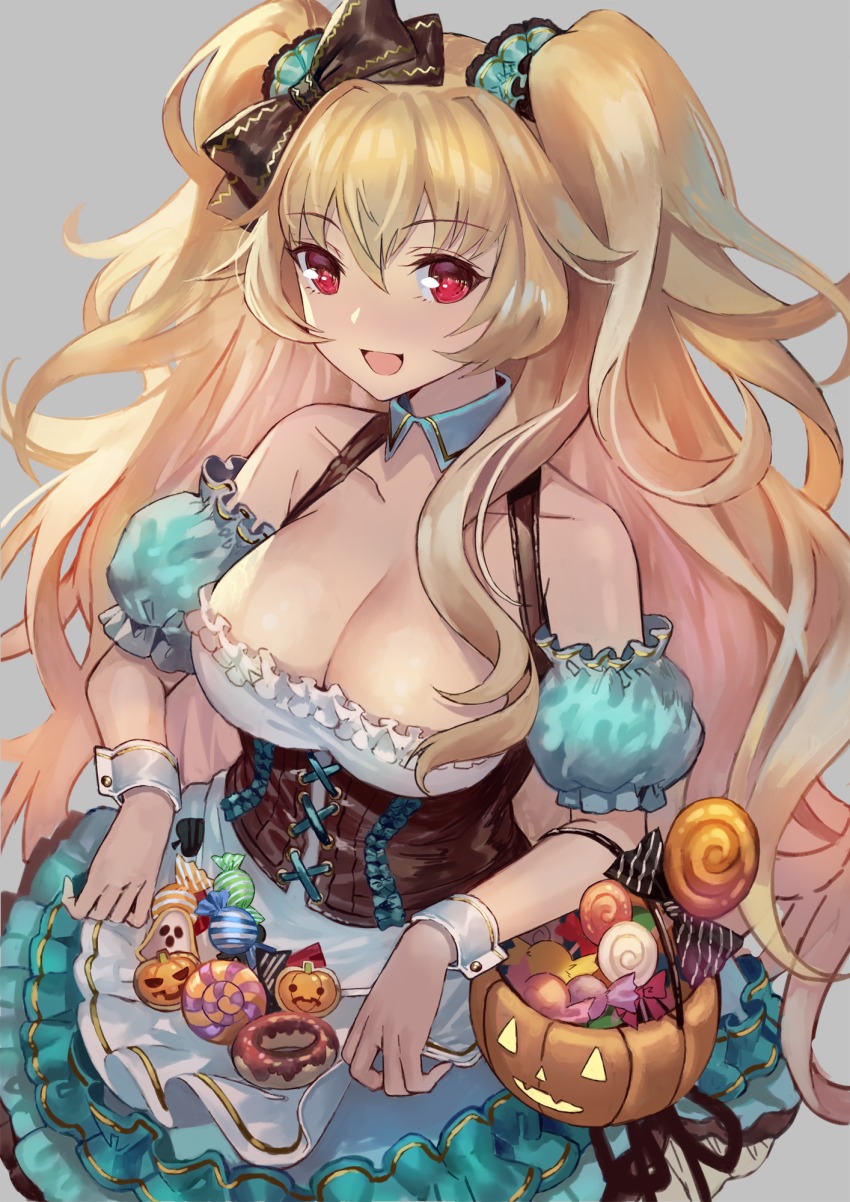 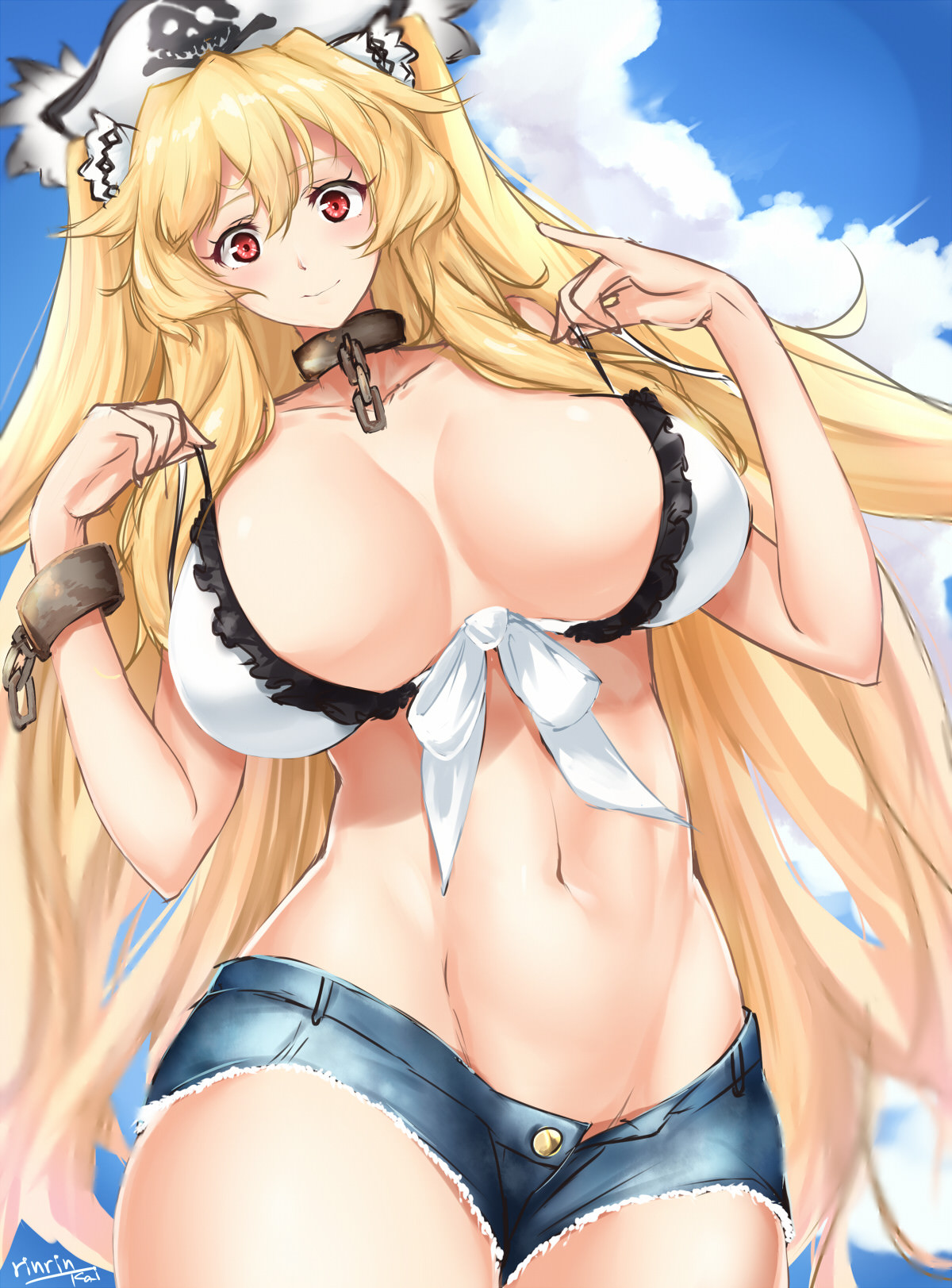 Usually, to have a title match, even a custom one at that, this early in ones career was somewhat surprising. Layla didn't know why her offer at attempting to take Yoko's bedroom belt was accepted, be it the openness of the champion, her proceeding reputation via her step-sister, or a mixture of both. Layla herself only pondered on it for a moment, before her mind latched to something else. Namely, the fact that the redhead she had seen in action so many times was about to tangle with her! On that very bed!

Grinning from ear to ear, Layla's large behind bounced on the bed as her hands were either side of her. Testing it seemed just how bouncy that bed was, the blondes eyes didn't leave the door as she hummed rather cutely, eagerly awaiting to see a girl she fawned over so finally appear in person before her!
DEVILISH'S DEVILS
Top 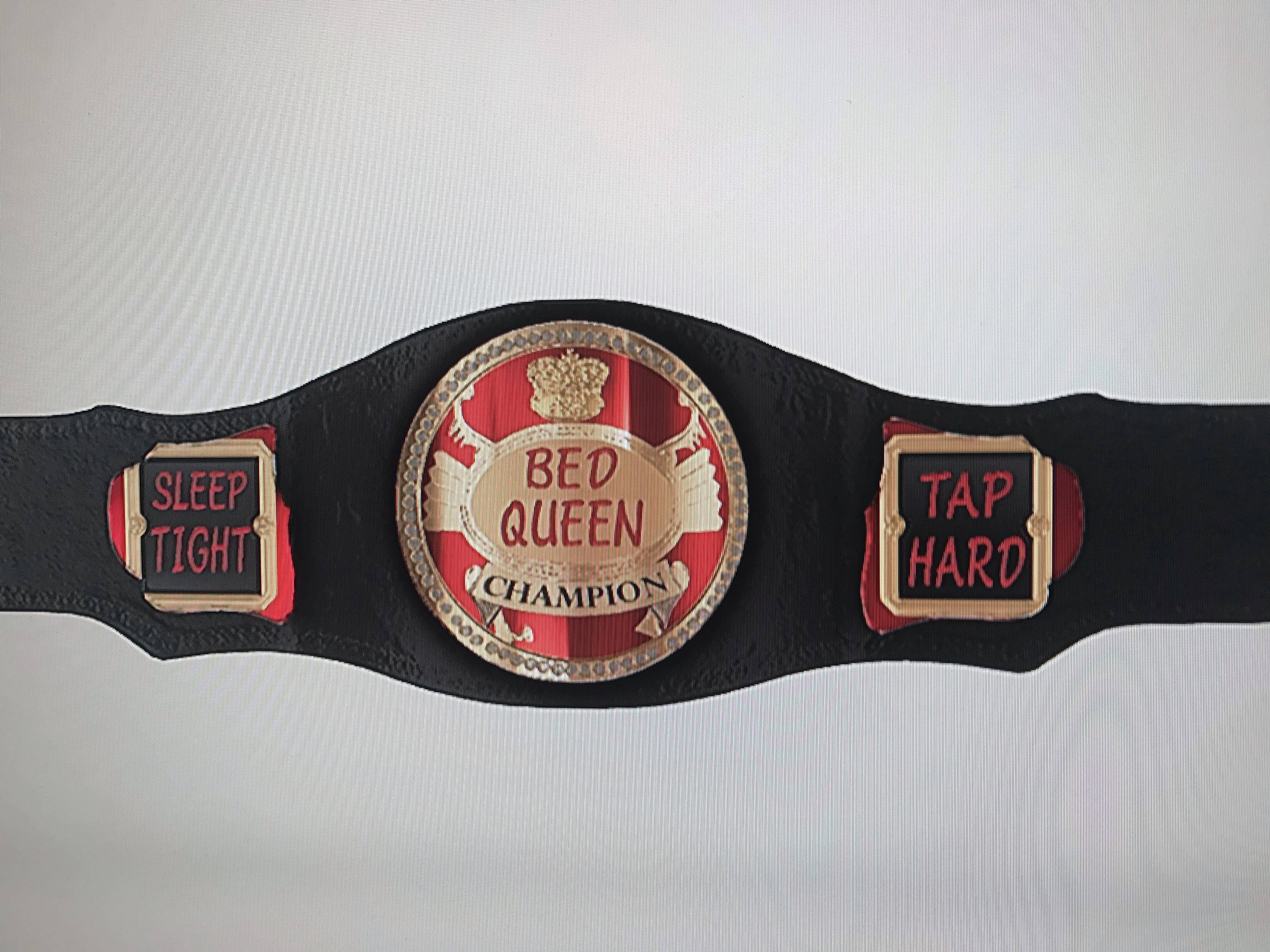 Yoko was building up a reputation of one who wasn't shying away from challenges, even when her belt was on the line. She was accepting as many challenges as her busy schedule allowed her to. From what she gathered, her opponent tonight was a big one, 50 or 60 pounds heavier than the redhead. The big girl also had a preference for similar kind of matches to this. Yoko was getting a feeling that the usual strategies won't be much good.

This time, Yoko was wearing a bit more kinky costume provided by the managers who were aiming at the kinkier audience and trying to make a killing at Yoko's expense. Yoko wasn't super excited about this, but she figured that maybe this will help seduce the opponent a little...
Yoko entered the room and saw a big woman with a yet another massive rack. Yoko's own was a pretty solid pair, but she starting to feel like almost everyone had a bigger set than hers... Oh, hello there, I'll be your opponent tonight, defending this belt here. Yoko would point to her belt that was on her shoulder before placing it on the table. She would do the same for her trusty sniper rifle as well, placing it against the table.

This time, Yoko did not need to take off any clothes or accessories, she was already all set and so she would climb on the bed and sit on her knees, waiting for her opponent to ready herself as well. Yoko Littner, maybe you've heard of me? Yoko would introduce herself, extending her right hand for a handshake.
Sloth's Harem
SpoilerShow
viewtopic.php?f=21&t=2237
Top

There was only one place Layla's eyes were going when Yoko came through the door. That rather delightful bosom..

"Oh! Hi...!" She'd suddenly gleam, apparently remembering there was a face attached to that rocking body, as she brought her hand up to give her back a nervous scratch. Her eyes were latched with Yoko's own for the time being soon enough, but it was a monstrous effort by the sizeable blonde to keep it that way. Even more so as she stood straight, with height that made it possible to effectively gaze at Yoko's face and bust alike as she looked straight down.

"I've...heard a little..." She'd lie, knowing a little more than Yoko than she let on, given the girls usual match type was perfectly in line with her own. Though Layla didn't really posess a list of women she desperately wanted to face within her time in LAW, there were definitely women she was more keen to face than other. Near the top, stood the woman before her. A woman she near enough fell on, as she grasped her hand to shake it with far too much energy.
Last edited by Devilish53 on Tue Oct 22, 2019 7:49 pm, edited 1 time in total.
DEVILISH'S DEVILS
Top

As the two shook hands, Yoko was looking over at her opponent and thinking how she's gonna battle this foe. Her little tussle with Silver has shown Yoko that size alone is a pretty good advantage in a bedroom match, where mobility is pretty restricted. She also knew that she couldn't let this girl get on top of her because it could very well end up like that time with Silver, where Yoko spent most of the match under the bigger girl. Now Yoko knew better than go full frontal against someone like this.

Lost in thought, Yoko was late to notice how hard was Layla grasping her hand, only to notice it later and start hiding her slightly pained expression behind a smirk. So, your name is Layla, right? Don't think I'll be easy prey just because I'm smaller. I've tussled with girls of your size before. Yoko wasn't yet sure what kind of character this person was, so Yoko wasn't too nice or too harsh, but competitive.

Layla was rather similar indeed to the aforementioned Silver, but where as the Bedroom Queen was out to make a name for herself and prove superiority over Yoko's bedroom championship, Layla was mostly here for fun. Sure, that belt would have been great to win, and owning it would have surely made for easier searching of opponents, but deep down Layla didn't mind if she had it or not. Still she was out for a fun match, one in which she wouldn't be holding back whatsoever!

"Ohh...So I've heard...!" And with that, Layla's hands went at first to Yoko's head, before being stopped short of their target. By no means complaining as she found Yoko's hands instead of her body, Layla held her ground rather well, which she imagined didn't surprise the middleweight whatsoever given her size. What perhaps may have confused Yoko was the fact the much bigger woman didn't opt to try and overpower Yoko even slightly.

"I hope we can have a fun one...and...not take it too seriously..." Her every movement near enough making her body jiggle, which only made her gigantic rack look all the more enticing.
DEVILISH'S DEVILS
Top

Oh? Yoko raised and eyebrow, thinking where could Layla have heard about that. Her vs Silver was a pretty private match, unless she was assuming so because of how Yoko pulled Silver out of the arena...

Then Yoko's eyes resumed to her target. Yeah, I do like the idea of having a fun time in matches, but I'm also pretty competitive, especially when it comes to my belt, so you better hold onto your cookies! Yoko declared a bit playfully as the two women locked up. Naturally, it wasn't Yoko's main intention to overpower this woman straight up like this, so she didn't push hard as her intention was to bait the heavyweight in. The problem was, the big girl wasn't pushing hard at all, either. Yoko was confused, she was sure with that size difference, any big girl would try to steamroll the smaller opponent immediately. Yoko wasn't sure whether this lady was shrewd or just... Not serious.

Holding hands was nice and all, but she knew she'd gain nothing by pushing forward, so Yoko would pull Layla in instead, hoping to make her stumble forward at least somewhat, while Yoko would quickly move to the girl's left side and wrap her right arm around Layla's neck and start squeezing it. This wasn't going to achieve all that much for Yoko, but at least from this position, she had a number of possibilities to shift this into.
Sloth's Harem
SpoilerShow
viewtopic.php?f=21&t=2237
Top

Layla was both gauging Yoko's strength and simply enjoying the moment, as the two stood across from one another just holding hands. That grin never ending, Layla was about to give her response to the mention of cookies, when her nimble smaller foe hooked around her after a little trip.

Catching the bigger woman and bending over, Layla's head was a little high up in that headlock, purely because her size made it so easy to straighten out in the hold. Such meant that Yoko couldn't really squeeze down on her neck, nor was Layla's cheek really tight to that bosom as would be the usual case for holds like this, but neither seemed concerned.

Least of all Layla, whose hands lightly held Yoko's hips to brace herself, before the right hand slipped further down. Grabbing hold of those lovely cheeks soon enough, with quite a giggle!
DEVILISH'S DEVILS
Top

Yoko's little maneuver worked as it should and started squeezing on Layla's neck from the side, but it was almost like Yoko was hanging on it rather...
Also, the redhead felt the girl's big hands, cup Yoko's big cheek. Clearly, the two women were seeing this match differently, with Yoko looking to put herself in a favorable position, while it seemed like Layla was looking to get into a more pleasant position...

Yoko knew she wouldn't achieve much from this position, so she would try to move behind the big woman with big assets and try to lock her in a chokehold from behind with both arms. You want my cheeks? You'll have to work for it!
Sloth's Harem
SpoilerShow
viewtopic.php?f=21&t=2237
Top

Layla's own casual style about the whole thing cost her soon enough, as Yoko, intent on keeping that belt of hers, zoomed in with intent to lock her up and squeeze her throat. Naturally preferring having air in her lungs, Layla was quick to bring her hands to the hold, prying at the elbows to let off the pressure. Though a full escape was far off, it would be difficult to really work the hold what with a woman of that size fighting against her. Though, Layla didn't seem too eager to bail on this moment.

"Ohh..I will!" Purposefully rocking her shoulders left and right, to grind her upper back into Yoko's lovely bosom!
DEVILISH'S DEVILS
Top

Yoko got behind the bigger girl, wrapped her arms around that wide neck and started choking and unintentionally pressing her big, but tiny by comparison breasts into Layla's back and the harder Yoko would pull on the girl's neck, the more her breasts would push into Layla's back.
Layla's hands quickly went to pry Yoko's arms apart, but after a few moments Yoko noticed that those attempts weren't all that strong. Either this girl was deceptively weak, or she just wasn't showing her strength even in this kind of circumstance.

If you want the booty, you must get a taste of my thighs first! Yoko declare before continuing with her plan, which was that she would sit down on her ass and would wrap her legs around Layla's waist and squeeze on it. Though Yoko quickly noticed that it was pretty hard because of how wide Layla's waist was and it was hard to clamp her legs together because of that.
Sloth's Harem
SpoilerShow
viewtopic.php?f=21&t=2237
Top
Post Reply
49 posts

Return to “Other Areas”