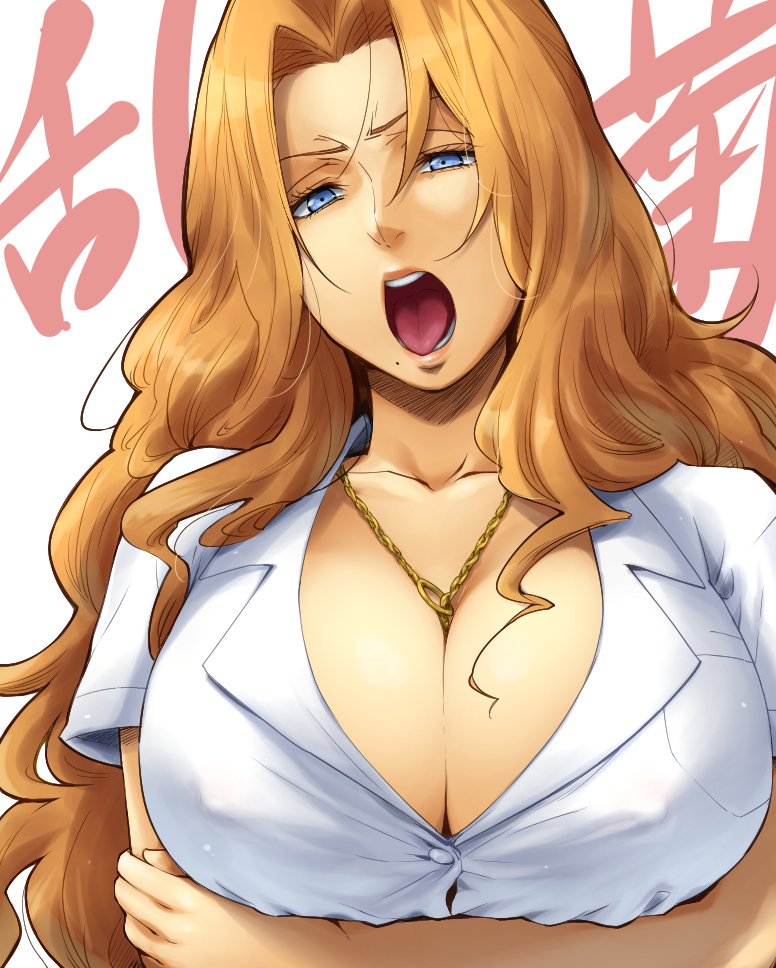 With yet another quiet day it seems of wrestling before the entirety of LAW, it only seemed natural that likewise LAW's medical staff would be somewhat devoid of work. It had been some time since the most recent of brutal events, that being bloodsport, and with LAW's first Tokyo Brawl still somewhat in the planning stages, those with injuries beyond a few scrapes and bumps were quite rare indeed.

Naturally, one of the prime members of said medical staff and chief con artist of the entire department, Rangiku found herself lazily draping herself across her desk. Her massive bust mushrooming against the table as she put her forehead against it, Rangiku's arms were stretched over the far side. There was only so many crosswords and binges on her mobile Netflix that she could do, before actually needing some action to cut apart her day.

Luckily for her, said action was just in its way. And for the first time yet, it was of a male variety...
DEVILISH'S DEVILS
Top

The last match Karbon had was pretty brutal... He never expected to get kicked around so hard and every part of his body just ached. The limp down the hallway was enough indicator that something was wrong with him and the fact that he was holding his right arm. "Ugh... I shouldn't of let my guard down against her, I'm really paying for it now." Sure, during the match it didn't feel so bad because of all the adrenaline that was running through his body, but now, it felt like he got ran over by a truck.

Finally making his was to the medical portion of the building. There, before him, was a door to the medical room. He didn't know if they were in or not, but he sure hoped they were! He need attention to his wounds and he needed them now! He tried to look into the window, but really didn't see anyone so his next course of action was to knock on the door.

The moment that door was banged upon, Rangiku sat up straight. Leaning back in her chair, quickly bringing her hands up to brush back her hair, the stacked doctor tried as best she could to assume as professional a look as she could muster. At the door could have been the head of the department, after all..

"Ahem...come..come in...!" She'd call out, crossing one arm right over her giant bust, with the other elbow resting upon it, to put a finger upon her cheek.
DEVILISH'S DEVILS
Top

Karbon heard a voice on the other side of the door, telling him to come in. He obliged the voice by gripping the doorknob and twisting it. He then pushed open the door and walked into the well lit room. The room itself was very inviting with a lively plant in the back next to a desk with computers on it. Sunlight pierced through the window and bathed itself over the desk. Pictures were hung up on the back wall that must of been all the medical staff that worked there. Also, sitting at that desk was a very beautiful woman.

"Uh... Hi there, my name is Karbon and I think my whole body is broken." He would say with a pained smile on his face. He tried to make light of the situation, but his outside appearance made it quite clear that there was more going on than met the eye. The limp in his step and the holding of his arm should be enough for the doctor sitting there to tell there was something up.
Wrestlers:

Karbon didn't need to be so blatant in his injuries for Rangiku to give her usual reaction. Had the male strutted in perfectly fine, a picture of health even, the ginger doctor would have rose as she did like a bolt. Nearly knocking her desk over with her wide plentiful hips, the stacked beauty closed the distance, purposefully pushing her bust into Karbon's chest though acting of course nonchalantly at the act. Her right hand raised, she'd press the back of her palm to his head, whilst forming quite the concerned, if fake, look upon her mug.

"My heavens...Take a seat, take a seat!" Her opposing hand pointing to the nearby chair, as she near enough nudged Karbon into it with her body.
DEVILISH'S DEVILS
Top

Shocked just to see how quickly the doctor stood up at the sight of him, Karbon thought that he must of been in really bad shape. He watched as she rushed over to him and basically started to smother him with how close she got. Her right hand then touched his forehead and his eyes looked up to see what she was doing. He then looked down at her face and saw the concerned look in her eyes. "Is... Is it that bad doc?" He would say with fear starting to build up in his body.

He did as instructed and went over towards the chair that she was pointing at and sat down. It was actually pretty nice and comfy as his body kind of bounced as he sat down on it. "My career isn't over here at L.A.W. right?"
Wrestlers:

"Oh no..you'll be fine...so long as I'm quick..." With that, Rangiku's bust went full on into Karbon's face as she stood straight, once more knowing full well what she was doing but playing dumb. Her hands to her wide hips, they would stroll up her figure as if searching for pockets, before removing the pen from her chest pocket she knew was there all along. After putting it in her hand, she'd hold the end to her lips, before bending over putting her face level with Karbon's own. And in the process, letting her massive bust give off what could only be described as a insane amount of cleavage.

"Hmmm...Hmnmm..." She'd mutter whilst staring dead into the bewildered males eyes, as if trying to plan out what she was going to do...
DEVILISH'S DEVILS
Top

Karbon was relieved to hear that his injuries weren't career ending and let out a deep sigh of relief. "That's good to he-Ooommph!" He would say as he was caught completely off guard by her planting her chest right into his face! He started to poke at her breasts to try and get her attention that she was smothering him, but it seemed like she either didn't notice or didn't care. He felt her body shift around as if looking for something before her boobs finally left his face and went downwards. He was the met face to face with her as it looked like she was studying his eyes.

"Um... uh..." He wanted to say something to her about what she just did to him, but thought better of it since he didn't want to make the situation awkward.
Wrestlers:

With her face a inch away from Karbon's, it almost seemed as though Rangiku was actually moving in for a kiss. In truth though, she was simply lost in her thought; her mind racing with fun ideas on how she could smother and squish this male beyond his wits. The fact she was leaning forward was simply a side effect of how lost she was.

"Oh!" She'd suddenly snap up, straightening up again as her nose tickled Karbon's. With seemingly an idea to mind, she'd put her hands to her wide hips, stretching out just a little to make her figure appear all the more curvy.

"Let's begin with some stretches, shall we? You did say you feel alot of ache...tell me where and how much..."
DEVILISH'S DEVILS
Top

The nerves on Karbon were screaming at him to back away as her face came closer towards his. He had no idea what she was trying to do and no doctor that he has ever been to before ever got this close to his face with theirs. "Too close! Too close!" He would say as he finally started to lean backwards in his seat. Just as their noses touched, it seemed like she finally snapped out of it and backed away, "Whew..." Karbon would let out a sigh of relief.

"Stretches? Sure, I can try and see if I can stretch." He would say cautiously. She is the doctor after all and knows better than he does. With that, he moved forward more into his seat and started to stretch his back by touching his fingers to his toes. His right arm was still killing him as he did this stretch and let her know by wincing in pain and going straight back to holding his arm.
Wrestlers: