After a long day of getting beaten up in a ring, the Briton had grabbed a nice hot shower in the locker room, then headed out to her favourite watering hole the moment she had gotten dried and dressed. She'd found it on the way home from the stadium one day, tucked down a side street on the way to her apartment, a shining piece of home in a very different country: The Red Lion. A British-style pub. A little home away from home.

Sure it looked generically British inside, stereotypical even, to the point of having the most common name a British pub could have. But, it still had all the fixings. Classic pints, a few flags and knick knacks hung about, it even had football games on the TV, and the proper English ones- not that American rubbish. Other than her apartment, this place was the one sanctuary she had away from business- there weren't any heels to act like raging jackasses here, there wasn't any getting thrown through tables, there was just Millie, a pint, and a bowl of wings that she could down as quickly or slowly as she cared to.

At least, that's how things had worked out so far.

Millie was distinctly aware of the possibility that someone else from LAw could ifnd out about this place at any time. Hell, they may have already found it and just came on different days, or at different times from Millie. But if that ever happened, the bar always served scotch, and enough of that could make most of her problems disappear. Or at least let her forget about them for a bit.

To say Karen Starring had interesting encounters in the world of drinking when under the profession of wrestler was to be something of a undersell. Having rarely frequented bars in the first place, those few times Karen had actually done so near always ended in a scuffle. Or often enough, somehow, worse.

Scale and figure, not actual attireShow 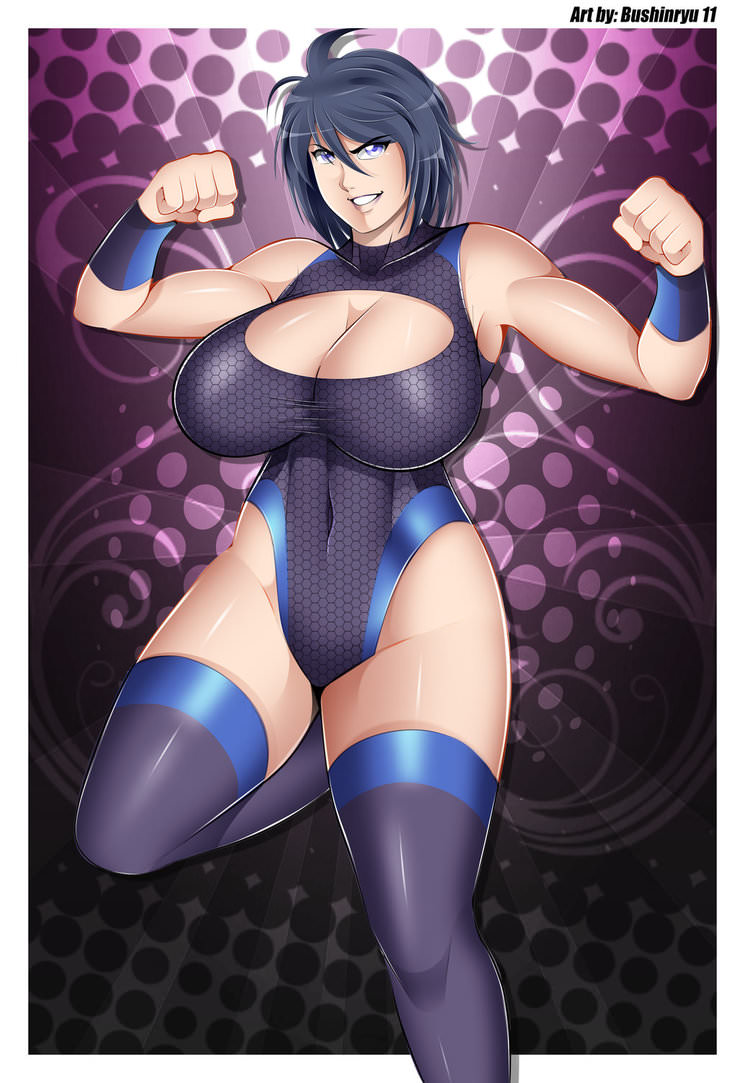 Today, adorned in a tight set of navy jeans with a even tighter black t-shirt atop her frame, the extreme curves of the amazon would near enough fill the room as she swung through the door. Black jacket equipped, with her right hand, Karen would offer forth quite the wedge of notes, as if to set herself a tab for the evening.

It was perhaps unsurprising the amazon was in desperate need of a drink, or relaxation in general. Previous attempts to relax had ended in curious, painful scenarios.

And God knows Karen had a great reason to relax.

Placing her wedge of notes upon the bar, showing absolutely no issue with nudging those whom had been patiently queuing up out of the way with her large hips, Karen's heavy bust now weighed upon the counter. Head in her hands and sigh to her face, today, Karen only wanted to get wasted.
DEVILISH'S DEVILS
Top

The first sign of trouble was the disgruntled muttering that came from behind the Briton. She had just been polishing off her second drink when the low voices started to float their way through the noise of the bar and made it to her ears. By the time she had straightened from her hunched pose and placed her glass down on the counter, the source of the complaints became evident- a amazon-looking woman who had just taken a seat next to her.

Rolling her eyes, the Briton got started on another wing, slowly nibbling at it while she side-eyed the newcomer, curious if it had happened to be one of her coworkers. The first thing that caught her eye was the heavy bust resting on the counter, big enough that Millie was slightly surprised that the bar wasn't buckling under it. The second thing she noticed was the woman's face.

Oh fuck. The thought shoved its way into the former-pilot's mind like a drunk shoved their way into a bar. Not this bitch.

Karen Starring. Millie had never met the woman, but she certainly had something of a reputation around LAW and certainly not the kind that made the Briton eager to start socializing. So she stayed silent, finished her wing, and placed it neatly on the plate her bowl had come with. At least that's what she had intended to do. Instead, her mind softened by booze, she slipped in an irate mutter of "Bloody hell..." right before finishing her snack.
Your friendly neighbourhood caffeine fueled mecha
The BarracksShow
"Major" Millie Walker
Ava Landry
Lisbeth "Liz" Parker
Hisae Sano, Nurse of LAW
Lari "Star"
Naomi Tsukuda
Top

With drink to hand, Karen was quick to reach the halfway point on her whiskey, before putting it back to the table. Taking only a moment to shake her head back, reacting to the pure heat of that strong alcohol as it swung around her mouth, Karen barely took a moment to 'rest' before equipping the glass back in her hand. Before curiously enough, she heard someone. A voice she didn't recognise, at that.

Turning her head towards the white haired figure next to her, Karen, uncharacteristically shrugged it off. Bringing that glass back to her lips, another motion would be given to the bartender for a re-fill almost, as she lightly slammed the empty glass back upon the table, before the ice had even begun to melt. As she was waiting for that re-fill, mind, she found her teeth baring, and a somewhat annoyed look to her mug. Paranoia, coupled with the simple desire to be left alone, alongside Karen's already hate-filled persona lead a finger from her nearest hand to tap the white haired beauty on the shoulder.

Grabbing hold of her freshly delivered drink, Millie managed to gulp down a third of it as she silently bemoaned the situation. All she'd wanted to do was relax and escape work, and here was a little piece of work right beside her. And not just any piece of work, probably one of the biggest heels that LAW had to offer. Brilliant, just bloody brilliant.

Well, at least she was easy on the eyes.

Gulping down another third of her pint, she slammed it back down to the bartop and replaced it with another wing in hand. She had just been in the midst of chowing down on the wing when she felt a tap on her shoulder and the hairs on the back of her neck stood on end. Turning slowly, she summoned her best distant gaze and tried to stare straight through Ms. Starring before returning the woman's own question.

Only Karen's eyebrow moved as Millie shot back that look, seemingly trying to give the amazon a run for her money in the deathly glances department. Unsurprisingly, Karen wasn't amused in the slightest, as she moved her drink just a smidge forward, so that when she began to lean onto the bar and against this figure both, she wouldn't spill that precious liquid.

"Don't you fucking echo me you little shit..." Words quiet yet laced with venom, as Karen's very teeth became visible as she glared back at the girl she was cutting some distance with.

"You got a problem, spit it out..."
DEVILISH'S DEVILS
Top

That got a reaction out of the Briton. Millie's eye twitched as the amazon shot back an venomous retort, even as she tried to play it off by taking another long gulp from her drink followed by tearing the meat from another wing in a savage bite. She shifted her gaze to glare daggers into Karen's eyes, pressing forwards and moving her frame against the heavier one of the bitch.

"Oh, you want to know my problem?" She asked after a long silence. "My problem's that the biggest bitch of LAW just walked in and acted like she owned the place. Don't think yer hot shit here, ye twat..." She replied, a calm fury in her words as a glimpse of her native accent slipped free. "Ye may be queen bitch at werk, but this is my terf."

Millie would raise her glass one more time, polishing off the glass before her expression changed to a soft smile as she noticed the bartender approaching. She quickly motioned for another drink as she did her best to pretend nothing was wrong. This was her favourite bar, after all. She could hardly afford to get kicked out over something as insignificant as the bitch sitting beside her.
Your friendly neighbourhood caffeine fueled mecha
The BarracksShow
"Major" Millie Walker
Ava Landry
Lisbeth "Liz" Parker
Hisae Sano, Nurse of LAW
Lari "Star"
Naomi Tsukuda
Top

Karen couldn't resist a small grin, if one mixed with her signature angry look. It was always good to be recognised after all.

"Ohh..so that's it...hmm?" She'd purr, hand outstretched, crossing the path of both Millie and a rather bemused bartender, as Karen placed her hand upon that dish of wings Millie had ordered herself. Grabbing a hold of it, she'd nonchalantly slide it across the bar in her own direction, moving it past her, so that if Millie wanted it back she'd have to go through or around the amazon herself.

"Don't be moody on my account...there's no reason to crap yourself just because me of all people walked in..."
DEVILISH'S DEVILS
Top

A heavy silence fell over Millie as Karen purred back at her, grabbing hold of her plate of wings and dragging them along the bar. Only the Briton's eyes moved, following the trail of the dish as they slid along- first to Karen's spot, and then past so that the amazon was physically between the ex-pilot and her snack.

Her eyes flickered over to the bartender, then back to Karen and a smile slowly spread its way across her lips. "You're right." She said in an insincerely sweet tone. "No worth getting worked up over who's around, right?" She asked.

With that, her hand slipped its way over to Karen's glass, sliding it back to her and taking a swig. All the while, she'd stare directly at the amazon beside her.
Your friendly neighbourhood caffeine fueled mecha
The BarracksShow
"Major" Millie Walker
Ava Landry
Lisbeth "Liz" Parker
Hisae Sano, Nurse of LAW
Lari "Star"
Naomi Tsukuda
Top

Her eyes widening, you'd have thought that with that swig, Millie had just taken away all chances at future championships within LAW from Karen, such was the terror and shock on her face. Not to be outdone, Karen simply waved her hand, calling for a replacement drink, one that was quickly placed side by side with the wings, across from Millie's reach.

"True..." Her right hand finding the wings without even breaking eye contact in return, Karen took the meatiest bite out of the biggest wing she could find, making sure that there was near nothing left to salvage from that single chomp alone.