The Luscious One vs the Mastodon: Elm Ederne vs Diana Ricci (For Faeron)

The Luscious One vs the Mastodon: Elm Ederne vs Diana Ricci (For Faeron)


Backstage doing some light stretches making sure she is all loose and ready to rumble, Elm is cracking her neck and back muscles. "Alright another match all I need to do is build up a few win's and I'm good..", She says to herself with a big grin on her face doing one last pose in front of the mirror.

"I wonder if he's watching tonight match... Haven't heard from him or gotten a call yet.. Oh well always the nice ones..", Mumbling to herself as the loud Mastodon bellow echoes the arena before her music plays. Walking out on stage carrying her massive prop hammer before slamming it onto the stage as smoke shoots up from the stage, before she struts her way down the ramp to the ring.

Slides into the ring and get's into her classic Superman pose, with her fist on the canvas giving a big grin to the fans who cheer her name.
Going to her corner and awaiting whoever her opponent is, Elm is going to put on a show tonight and show everyone including him what he missing out on. 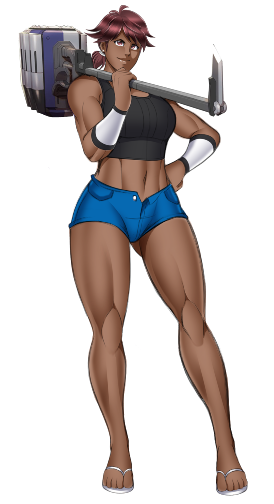 Re: The Luscious One vs the Mastodon: Elm Ederne vs Diana Ricci (For Faeron)

Diana was out next, once again facing another woman who had the same build as her and the Italian-American was eager to prove that she was the stronger woman. Despite the fact that her debut match didn't go as well as she had hoped, the former body builder was still all swagger as she climbed into the ring and flexed her impressive body to the crowd to a chorus of boos to which she did a rude gesture to the fans as a result. She turned towards Elm, noting the height difference and showed off her body as well.

"I don't care how big you are, I'm still the strongest woman in this ring!" She declared loudly.
Come Witness the Order viewtopic.php?f=21&t=3341
Top

Re: The Luscious One vs the Mastodon: Elm Ederne vs Diana Ricci (For Faeron)

Elm seeing her opponent making her way on stage, bust out laughing seeing who she is fighting. She saw the woman debut match and even through Diana is fit and built, she is no where her size and build, even anything else for that matter as she wipes her eyelids from laughing so hard. Taking a deep breath to focus on the match and smiles seeing Diana declare that she is the strongest woman in the ring.

"Care to prove that Honey? You maybe strong but baby I'm stronger then you ever be." she responds back even flexing her arm for good measure in front of Diana. Waiting or the bell to ring to show off and show her opponent who the strong one really is.
Last edited by The Riders on Wed Apr 07, 2021 6:02 pm, edited 2 times in total.
viewtopic.php?f=21&t=5874
Top
Post Reply
3 posts • Page 1 of 1