"Oooh Yea! This outfit is the cats pajamas! Pun entirely intended..." This voice came from the wild cat fighter, Samantha cattra, or Samantha blaze as she is called out of the ring. But for now she's in the backstage of the ring and she was wearing a new wrestling outfit that she bought and she absolutely loved it, it was a top, bottom and long stockings that hugged her legs very nice. Also she was pretty excited as this was a special match, it was a cage match! Meaning that she was gonna fight in a cage. "Sounds like this kittens going in a cage!" She said as she practiced scratching the air and even kicking the air to practice. After a few minutes of waiting she was called down to the ring. "Time to show this kitten has razor sharp claws!" She said as she got on her fake cat ears and tail and walked to the ring.


She was given lots of cheers cause of her sexy outfit, she smirked and blew kisses at the crowd and waved to them as she climbed into the cage. Samantha was told that they will lock the cage once Jenny arrives, for now she sat down on her corner and waited for Jenny to come.
Torra shinjiro gauntlet of fierce fighters!!!

Jenny would be a little nervous in the locker room while waiting to be called to the ring, she knew the fight would be a cage fight, but she was not told until 1 day ago against whom!

Either way, she would look at the photo she took with her sparring partners on that day and she would be filled with the courage to do her best and win that fight.

Hearing how her name was announced in the ring, she would walk to the ring, looking at how the cage was on top, greeting her fans and entering the ring and feeling how the cage was starting to drop. After being completely closed, she would look at her opponent and she with astonishment would see that this girl has a tail and cat ears, so, approaching her very fast, she would greet herOh hi I'm Jenny, I hope our fight is a very good one, by the way, I know it will sound weird but ......... I can touch your tail and cat ears, the cosmetics are very nice
Jenny would tell him waiting for a response from the girl
it's Showtime!
Top

After waiting for a few minutes, she was checking her cat nails when her opoenent Jenny arrived and Samantha smiled a little as she was pretty cute and was a bit small compared to samantha. She saw Jenny wave and greet her fans by waving to them. Once she climb into the ring the cage was dropped and now both girls were in it unable to escape until one wins the fight. Samantha saw Jenny walk over to her pretty quickly and was pretty polite. Like her brother torra. But she also asked if she could feel her tail and ears. This made Samantha giggle. "Go ahead little mouse. You may touch before the match begins. Just try not to pull them off." She said to her.
Torra shinjiro gauntlet of fierce fighters!!!

Jenny with an emotion would touch the tail and the ears, caressing the fabric with which it was made and remembering something similar to her, she with a happy voice I have something similar, when I get a lot excited, my hair starts to move and finish with the hair with a cat shape, it's funny and also it's like a sign that now I'm serious, Jenny would say as she showed she thought when her hair had risen in LAW
but hey, now enjoy your accessories, it's time we have a "cat fight" hahaha would say jenny before move to her corner and wait for the bell to ring and defeat this girl who, for jenny, was very pretty 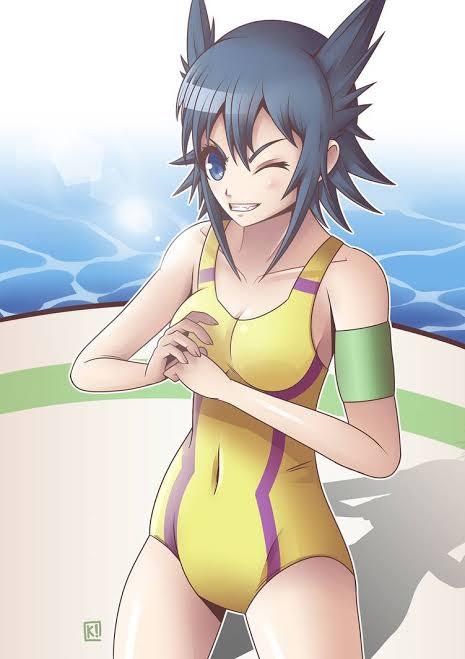 Samantha would smile and giggle as she felt Jenny touch her cat ears and tail and caressing the fabric on them. Samantha playfully purred like a cat. Then she heard her about how her hair gets up in a similar way to a cats and behold it did. "Well now this little mouse is a cat. I look forward to the cat fight!" She said playfully as both fighters got to their corners and soon enough the bell rang beginning the match! Samantha would take this chance to run over to her and give her a good solid punch to her face. Mostly as a test to see what would she do.
Torra shinjiro gauntlet of fierce fighters!!!

[Jenny would smile when Samantha would mention that now she is a cat and was waiting for that cat fight, so she would move to her corner with excitement, and when the fight started and she heard the bell, she would see how Samantha had thrown herself against her instantly, but jenny with very little to go, she would dodge it, but she would trip and fall on her butt and with a little laugh as she got up she would tell samantha

if you had done that 3 weeks ago, I wouldn't have I dodged, but I have faced my partner many times as training ......... and she has already hit me successfully 3 times !! 3 times they have treated me as a matador and she as a bull, but now, It's not that easy Jenny would say before approaching her and try to kick one of her legs and attack her fighting stance
Last edited by Lederface on Thu Feb 25, 2021 8:32 pm, edited 1 time in total.
it's Showtime!
Top
Post Reply
6 posts • Page 1 of 1