Birth of a rivalry- Marlee Jackson vs CyberWidow

Birth of a rivalry- Marlee Jackson vs CyberWidow

Backstage, Widow is being treated by doctors who are checking her for signs still after a few weeks have pasted from her brutal match. They find nothing wrong with her and send her out for her match up against some random jobber girl named Marlee Jackson, a girl with a somehow better record then her daughter but Widow needs a victory and this jobber is going to pay dearly.

Making her way down to the ring as her music plays, Widow slides into the ring rubbing her shoulders slowly trying to get it loose enough for the match even the ref comes over to check and see if she is fine. "Go away and bring my opponent out to defeat" 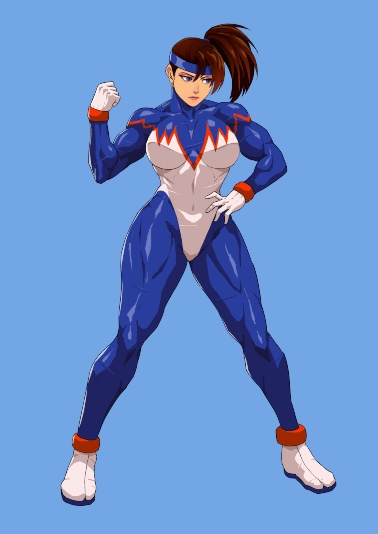 Marlee bounced from foot to foot backstage, psyching herself up for the coming match. An older, veteran wrestler, she'd seen enough to be confident that she could over come this Cyber Widow in the ring. Clad in her skimpy orange leotard, thigh boots and long gloves, the curvy Kiwi battler waited excitedly for the opportunity to put together some more wins in the ring!
The heavy beats of her music, Skillet - Sick of It, burst from the speakers and Marlee bounded out into the light, pumping her fists in the air and blowing kisses to the braying crowds as she made her way down to the ring. She slid under the bottom rope and rose to face her next opponent, squaring up to the body-suited woman facing her. She cocked her head to one side, smiling mischievously.

"Ready for a bit of rough and tumble, honey?" she cooed, doing her best to project confidence in spite of her underwhelming LAW record.
THE ARK TRIUMPH ACADEMY

Seeing Marlee making her way down to the ring turning to the ref with a your kidding me look on her face, even asking the ref "...Her your serious this is my opponent for tonight.." shaking her head at seeing her opponent and smirks at the thought of beating such a easy opponent.

"Rough and tumble... Sweetie I seen your matches and your record, most of them are you being on your back . Your not much of a threat and sadly I'm disappointed." Walking to the middle of the ring towering over the Kiwi fighter and waits for the bell to ring, wanting to test the girl and see if she can handle a test of strength.
viewtopic.php?f=21&t=5874
Top

Marlee felt her cheeks flush with embarrassment as Cyber Widow mocked her match record, and truth be told she wasn't in much of a position to dispute the other woman's assessment. The curvy Kiwi's career wasn't exactly off to a stellar start.

She could get things back on track here though. Smouldering angrily she didn't dignify her insulting opponent with a response, instead readying herself for the bell.

When it rang, Cyber Widow waited for her and Marlee was happy to take the fight to the older woman, advancing and lunging into a lock up, testing her mettle against the veteran and trying to exert some dominance on the match with a test of strength.
THE ARK TRIUMPH ACADEMY

Nothing to say Jobber girl hmm? chuckling at seeing her opponent not being able to reply or even deny her claims, because they are true and everyone knows it.

After locking up against the smaller wrestler testing her out but not going to hard on here, wanting to make Marlee see how over matched she is compared to her. Not wanting to let her opponent get comfortable, or even try to build any momentum at all yank's the woman forward planning on slamming her knee right into her stomach.
viewtopic.php?f=21&t=5874
Top

Marlee let out shrill growl of anger as she shoved into Cyber Widow, the woman's taunting getting under her skin as she mocked Marlee's record. However, shoving at the older woman, she quickly found that her foe had no interest in backing down, halting her in place and holding the New Zealander at bay. She tried to redouble her efforts to get some leverage, but before she could go any further Cyber Widow suddenly yanked her forward.

"UNNGHH!" Marlee blurted, doubling over as Widow thudded a knee into her stomach. The Kiwi wrestler's arms flailed as she lost her grip in the lock up, legs wobbling unsteadily as the surprise attack caught her off guard, leaving her achingly vulnerable!
THE ARK TRIUMPH ACADEMY

Widow smirks at the mistake her opponent just made, she has talent but no where near experience against someone like her who can take advantage of every little mistake you make. Acting quickly wrapping her arm around Marlee head locking it in place giving the Kiwi wrestler a small squeeze just to make sure she knows how much trouble she is in right now.

"Time for another painful lesson Marlee... Your not even in the same league as me.." Mocking the woman before falling back trying to drive her opponent head into the mat with a DDT.
viewtopic.php?f=21&t=5874
Top

Marlee spluttered for breath after the heavy knee to her stomach, doubling over and leaning straight into Cyber Widow's grip. She wriggled in panic as the woman's arm snapped around her head, her taunts continuing thick and fast as the older woman quickly seized control of the match.

"Nghh... no-no-AGHGHHH!" Marlee squealed as she was whipped forwards, her head slammed to the canvas in a powerful DDT. She rolled and writhed on the canvas, clutching her skull and reeling from the impact - a sitting duck for Widow's follow up.
THE ARK TRIUMPH ACADEMY

Getting to her feet slowly chuckling at seeing her opponent groaning on the mat. Walking over to her fallen foe and reaching down grabbing Marlee by the leg and drags her over to the middle of the ring "Let see if you can escape my submission hold Jobber Girl."

Her grip on her opponent leg tightens before placing the woman in a ankle lock, Slowly starting to twist wanting to make sure Marlee is in a lot of pain and away from the ropes."You can tap out anytime."
viewtopic.php?f=21&t=5874
Top

Reeling from the DDT, Marlee could only scrabble at the canvas as Cyber Widow dragged the curvy Kiwi to the centre of the, ring, ensuring all the ropes were out of reach before she clutched Marlee in a painful ankle lock.

"AGGHH!" Marlee yelped as her leg was twisted by the powerful veteran, pain shooting through her as she struggled. Gritting her teeth, she shook her head at Widow's mocking demands for her to submit, trying harder still to pull her leg free from the grip, arching her back and heaving for all she was worth.
THE ARK TRIUMPH ACADEMY