It's been a while since she had a match, the last few weeks were spent practicing, training and getting to know the city. Emily....didn't really have any sort of friends in the league, nor did she really see a reason to make any. She was never really a people's person, always struggling with the idea that she needed friends nor getting the with the ease that her sister could. Maybe that was why she was a star, and Emily was just a middling wrestler who made a decent paycheck and enjoyed her job but wasn't exactly one of the big stars. Hopefully, that would change soon enough, but Emily was cautious.

Tying the last lace of her boot, a manager came in and told her it was time. She nodded, cracked her knuckles and began heading to the entrance, only lowering the hood after she burst out of the entrance, smiling and waving at the fans, some of them even hers, and high fiving some of them as well. She liked that, she always liked this. To her, this was the best part of the match, the entrance, seeing who's in the crowd, watching the cameras follow you and wondering how you look on the big screen. The whole deal. This is what she loved.

Rolling under the rope, she waved some more, making a grand gesture with her arms before marching over to her corner, taking off her jacket to reveal her tanned skin and toned muscular. She clearly worked out, to the enjoyment of all the men in the crowd. She smirked and waved one final time, before looking at the entrance, waiting to see who came out. .
Top 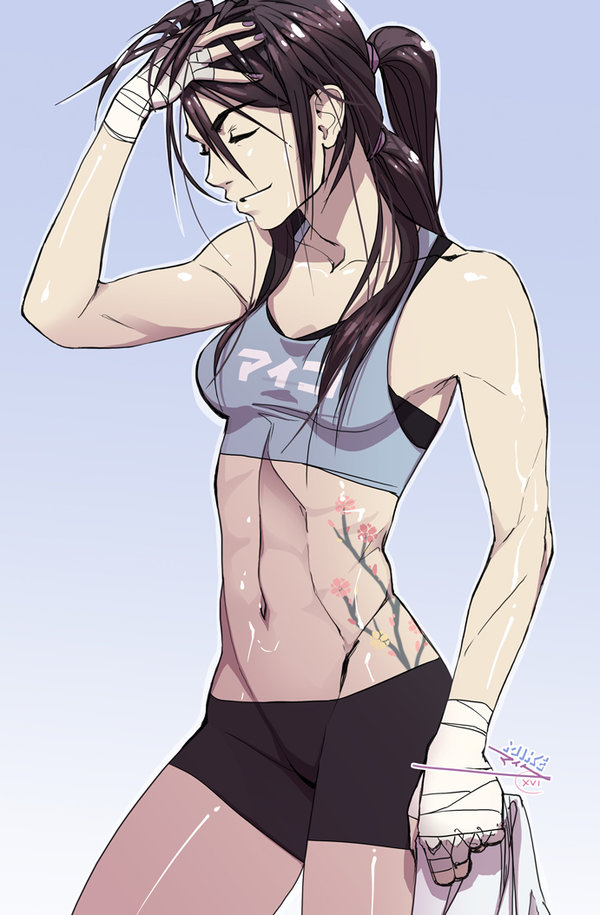 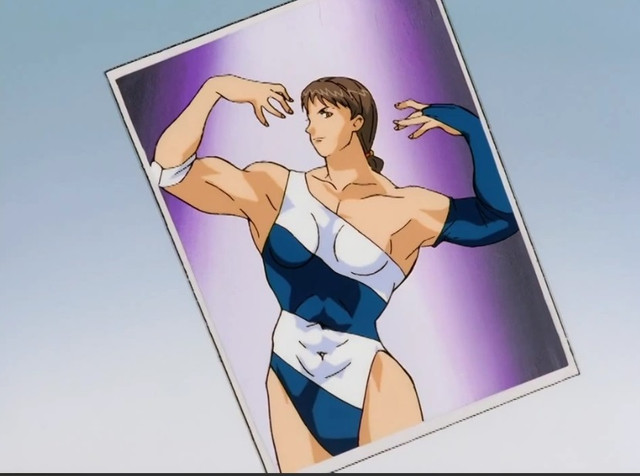 Tina got her fourth fight in a very short time. Preparing to fight in the locker room, Tina tied her wrestling boots. She was dressed, as usual, in a one-piece tight swimsuit with white and blue stripes emphasizing her muscular figure. After the last trainings she felt really, very good. Her sports form was excellent. When she got up she made a few jumps, wanting to check that the shoes were well stretched and fit. Then she decided to stretch left and right several times and decided to do thirty push-ups. She was happy. She saw on the monitor that her opponent was coming into the ring. There was a slight nervousness on Tina's face, which quickly disappeared from her face. Finally the moment came ... Time to go out to the ring. She heard the music: "Just Close Your Eyes"
Tina put on a black sweatshirt and ran down the hall toward the ring. Along the way, she saw several fans reaching out to her. Running, she touched those hands, greeting her supporters. The audience cheered. Tina was slowly becoming a wrestler more and more recognized by the audience. When Tina reached the ring, she noticed her opponent and decided to slip under the bottom rope and then intended to run through the middle of the ring and headed to the other corner, went to the corner waving her hand, greeting the audience, then took off her sweatshirt and turned it several times and threw it towards the audience. Then she decided to jump off the corner and head to the center of the ring. She decided to make a perfect split and flex her biceps wanting to show how athletic and muscular she is. It was a standard element of her program, which she tried to repeat every time she appeared in the ring.
At that moment, she heard the announcer introduce her: "... weighing 195 lbs and having 6.1" Tina Meyer ... "
Then Tina was going to wave to the audience and head to the corner so that she could look closely at her opponent. Tina looked at her opponent. She noticed that Emily looked quite athletic. She saw toned muscles. She thought the opponent's silhouette was very impressive. Although she was much lighter than Tina, she could make the fight interesting with its speed and agility.
Then Tina decided to wait for the start of the match, and when the bell rings, it comes out to the center of the ring.
Tina Meyer
Top

Her opponent was tall, very tall. Muscular too, meaning this would be a very tough match for her going by those two big disadvantages and Emily would have to depend less on grappling then she was used too. Which also happened to be what she was best at, so things already weren't looking too good for her. She couldn't trust in her grappling ability, striking would also be difficult as she couldn't work in a stand-up fight as she could with other opponents.

Well, she would figure something out. She always did in the end and hopefully, today wouldn't be any different. She looked at Tina, examing her and trying to get a gauge on her. She seemed to be an alright sort, not like one of those sociopaths who seemed to just get a thrill from causing pain. She hated those bitches. As the bell rung, she walked to the center of the ring and extended a hand to her. "You're uh...tall" she said in a rather awkward greeting.
Top

Both wrestlers were standing in their corners. Standing in the corner, Tina closely watched her opponent, her every move and expression, and wondered what tactics to use to defeat Emily. As she stared into the eyes of her opponent, she saw something positive, at least she thought so. However, she came here to fight and win, so she had to put other thoughts aside and focus only on the fight.

Emily didn't want to get into a test of strength with Tina, she knew that she would lose, especially with the rather ominous statement beforehand, though she had a feeling that was just theatrics. An expected thing in the profession really. Emily would be caught as she tried to step back against the German heavyweight to avoid the test of strength, her more tone muscular while strong, being nothing compared to her opponents. She was getting pushed back, and there was nothing she could really do about it.

Tina tried to implement her plan. Emily, however, did everything to not give in to the test of strength. Tina, on the other hand, tried to push Emily slowly towards the ropes. Emily approached and then was pressed to the ropes. At this point, however, Tina felt as if Emily had slipped her leg between Tina and herself. Emily wanted to knock Tina down on the mat.
The German woman, feeling that her opponent was trying to knock her down, decided to back slightly and sneered, saying:

The fight has just begun, Tina is full of strength and trying to knock her down on the mat requires a really large amount of strength or cunning. Then Tina will try to approach the opponent again and if successful try to press the opponent's body against the ropes and try to blow her knee to the opponent's stomach. If it succeeds, it certainly inflicts a lot of pain on the opponent.
Tina Meyer
Top

"It was worth the attempt," Emily says sheepishly at the larger woman. In hindsight, it was rather foolish to try and knock her down to the mat so soon, but she had to do something. She couldn't just take punishment and not do anything. Not only did that look bad for her, but it would make the match boring. These people expected a fight, not a squash. So Emily had to make a good showing, she had to earn that sweet paycheck after all. Her thoughts were interrupted by the sudden and painful meeting her stomach with the knee of Tina. She exhaled as the force of the blow blew the wind out of her lungs and grunted in pain.

She was quick to recover, however, punching at Tina's abdomen and attempting to roll under her to getaway. Her arms weren't hooked against the hopes so she still had the mobility and if she managed to escape, Emily would kick at Tina's leg, hard.
Top

Tina dealt a relatively strong knee blow to her opponent's stomach. This blow was successful. He made Emily feel pain and exhaled. Tina felt pride and satisfaction at the moment because the fight went according to plan. However, to Tina's surprise, Emily quickly recovered. Emily struck Tina's stomach:
Gggrrrhhh ... !!!
The blow was unexpected. Tina did not manage to prepare for defense. At that moment, Emily quickly rolled under Tina, inflicting a painful kick in Tina's leg. This blow caused the German warrior to scream:
Aaaarrrrggghhh ... !!!! because he felt pain.
The kick was relatively strong, because Tina staggered slightly and would try to touch the place where she received the blow with her hand, because she thought that in this way she would ease the pain and heal the wounded area faster.
Tina Meyer
Top

Emily smiled a cocky smirk noticing the good effect of both attacks. She had to keep on the offensive, she couldn't stop until Tina was down and tired while avoiding any counter blows that Tina could bring against her. She would punch again, starting with a jab aimed at the face and then a hook aimed at her stomach once more. She would continue this with a kick aimed at her right arm, right at the elbow, now in an attempt to break it, but to cause damage to the arm that would wear down the German wrestler.

She would try to back up out of reach of Tina's attacks, through the German seemed to be rather speedy despite her size so that plan may not survive for long. But she had to try, she had to wear her down.
Top

The blow she received in the leg caused the German warrior to lose concentration instead of focusing on the fight. Lighter and faster opponent took advantage of this situation. Unexpectedly, Tina received a blow to the face.
Tchhhhh ... !!!
And then the hook in the stomach. Gggrrrhhh ... !!!!
This caused the German wrestler to breathe out quickly and leaned forward, even as if he was coughing. Tina was not prepared for defense. This meant that the blows hit directly where they were supposed to hit. And then Tina received a very strong and quick kick in the elbow. She screamed in pain:
Aaaaauuuuu .... !!!!
These blows failed to knock the German warrior onto the mat, but certainly the series of blows was painful for the German warrior and caused her confusion and uncertainty. Tina tried to retreat to the ropes, holding her elbow, which at that moment was most throbbing with pain. Tina clenched her teeth because he did not want to show weakness and then thought: "... this pussy is fast but it won't win so easily with me ..."
Then Tina will try to closely watch the opponent, prepare defense, and if such an opportunity appears, he will start a counterattack.
Tina Meyer
Top
Post Reply
19 posts