Time for another match, and this one was a bit more normal. Belinda hadn't been thrown into a normal match up since she got her, her *test* against her tag partner was quite different from anything she'd done earlier. Her debut was a submission match, and her follow up was a tables match. Finally now, the third match she was getting a bit more of a normal affair with a simple standard match. Though her opponent wasn't someone she could find a whole lot of information on. Belinda who was a pretty big fan of wrestling and usually looked things up and watched these sort of things in her spare time found that a bit troublesome.

Moving out of the Gorilla Position, with her hood pulled up over her head the music of the Swedish American started to play out of the speakers and with it Belinda took to running down the ramp at full speed. She made her way to the squared circle and then suddenly dove in through the ropes, rolling up to one knee in a smooth motion before she took a run to the far off corner, climbing up onto the middle turnbuckle where she would raise her arms to the cheers of the crowd. Bringing her arms down she would pull her hood off and then jump down off of the corner post and turn around. Belinda would grab at the ring ropes and bounce her back against the corner. All that was left now was to wait for her opponent and see what kind of woman she was and more importantly what kind of wrestler she was.
D.D.D
Top 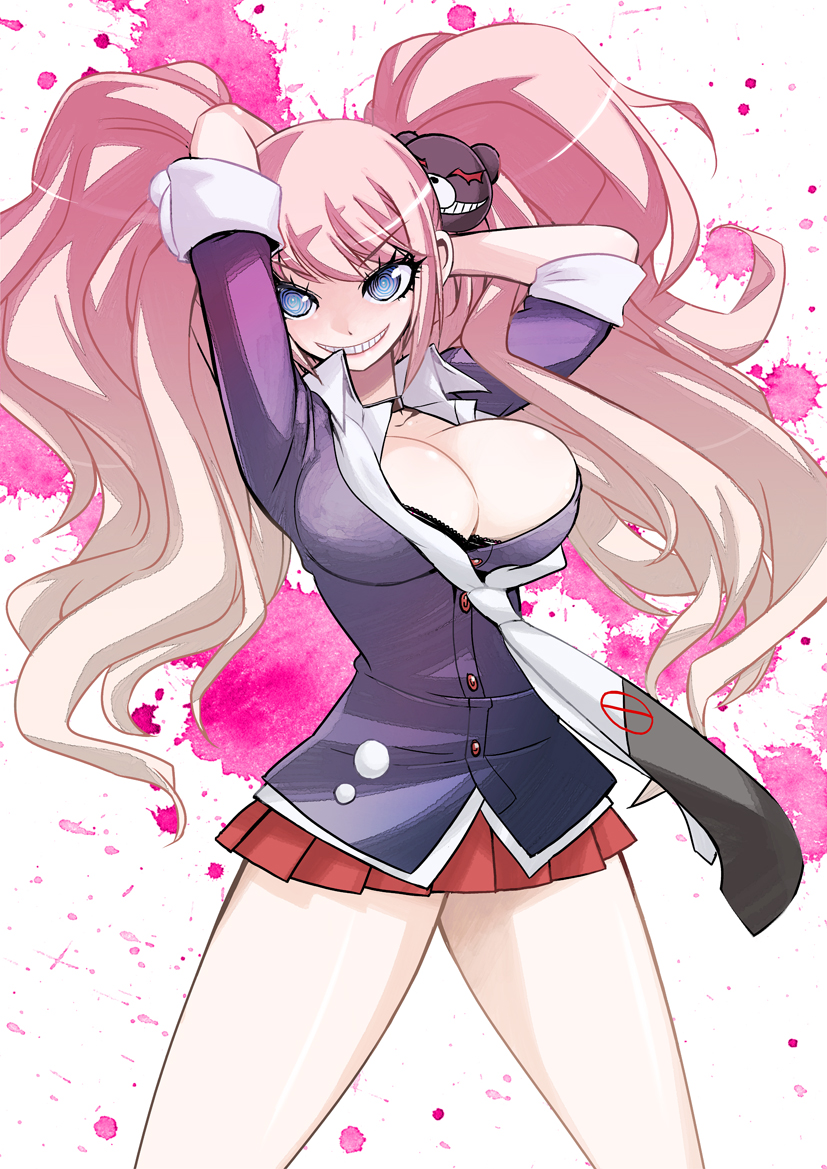 "Maybe I should get a nice custom made wrestling outfit....naahhh I look too good" Yusei spoke to herself in the mirror in the back, posing for herself, showing off her butt and her chest with a wide smile on her face. She was pretty much ignoring Belinda's entrance entirely, having to be alerted by one of the crew members with a knock that her entrance was up next. She waved it off, yelling back in a frustrated tone, just keeping to herself a little while longer. Because of this, Belinda would be waiting in the ring for a decent amount of time, Yusei finishing up just--admiring herself in the back before finally her theme played over the speakers.

Yusei stepped out onto the stage area shortly after, her wide toothy grin on her face as she made her way down to the ring--met with her usual mixed reaction. A long breath came from her mouth when she reached the ring, her chest pushed out a little with her breathing in before she made her way up the steps, climbing in through the ropes. She plant her hand on her hips, looking Belinda up and down, tilting her head and tapping her foot a couple t imes.

"Not sure if I'm supposed to be impressed or not! I mean it doesn't really matter if I'm SUPPOSED to or not, because I'm not!" She simply let out..Belinda being given quite the obnoxious and unpleasant opponent for her first match. "Also also! Did you lose some kind of hair match or something? Who has their hair that short and expects it to actually look good!" She let out, a loud laugh following her words, rubbing her eyes shortly after as if her laughter had made her tear up even.
Full Roster at The Lab!

After Belinda had settled into the ring after her entrance there was a rather awkward silence for the first few moments, as her opponent didn't seem to be ready? Their music hadn't started yet, usually there was only a few seconds between each wrestler's entrance but in this case it was starting to become a bit worrisome. Perhaps her opponent had flaked on the match?

Though a few more moments later that music started to play out of the speakers and Belinda would wait. She soon enough saw her opponent for the night make her way down the ramp. Watching her busty woman climb the steps of the ring and then went in through the ropes. She noticed Yusei looking her over and with it Belinda would tilt her head a bit in confusion.

When she heard the complaints that Yusei had Belinda would look on at her with a look that just questioned if Yusei was serious of not. She would soon step forward and place her hands on her hips, as Yusei laughed out like that she would move up to her unafraid and undeterred. " Maybe it's so people like you can get a good laugh? Figure you should get to have some joy tonight, since you won't experience the joy of winning." Belinda let out as she would throw a light smirk Yusei's way as she stood up against this bully, behind her friendly demeanor she was already pretty damn annoyed at Yusei.
D.D.D
Top

"Oh, I'll have the joy of winning." She let out, narrowing her eyes just a little when Belinda said those words. She was amused by how she acted, but she had to admit, her response and that smirk on her face sort of unbalanced Yusei's little opening bully. She tapped her foot against the mat a couple times, clicking her tongue as she scoped the ring...she didn't have any of her allies with her tonight..that was a bit of an annoying thing in her mind.

"..The faction thing hasn't really gone my way has it.." She said to herself, clicking her tongue. The idea of having to do this whole match by herself..it was a bit frustrating to her. She had started the faction so she wouldn't even have to worry about that sort of thing--that she'd have people assisting her at all times..but it hasn't quite worked out that way..yet at least.

Yusei stretched herself out a little, waving it off as much as she could before steadily approaching her. The referee had to quickly call for the bell in an almost frantic panic of Yusei's approach, able to see clearly that she was going to attack regardless. She reached in for Belinda's top, trying to just grip at it and yank forward, attempting to make the girl stumble right away to set up for her first offensive.
Full Roster at The Lab!

" I don't think you will." Belinda let out as she narrowed her eyes at Yusei, the two of them standing rather closer already as she was looking to show Yusei that the fellow blonde didn't scare her in the least and she wasn't about to be bullied by her. She didn't have any desire to let Yusei have her way and get away with being such a bitch.

When the bell finally rang, as the two beautiful young ladies were ready to start things off, Belinda would stretch out a bit and then get ready. However as she was about to move into position, Yusei grabbed a hold of her top and yanked her towards the fellow blonde! Belinda gasped out in surprise...stumbling forward as she would quickly try and grab onto Yusei's top in response and try and yank the fellow blonde backwards, trying to shove her and send them both stumbling towards the ropes!
D.D.D
Top

Yusei was all smirks as she pulled on Belinda's top like that, hoping that she was going to catch her off guard fully--but to her surprise, she grabbed onto hers as well! She yelped out a little, stumbling back as the both of them went straight into the ropes, Yusei's back ending up against them as they were in a little 'stalemate' with their tops both gripped..though Yusei wasn't exactly the most fond of being pushed back into them like this, shaking her head just slightly.

"What--do you think you're doing?? Trying to strip me??" She said something a bit silly, gritting her teeth as she glared at her, bringing her other hand in as she tried to give the girl a swift slap to her cheek!
Full Roster at The Lab!

Belinda grabbed at Yusei's top as the fellow blonde did the same, and the two would quickly start to struggle against one another. As Belinda managed to push and force Heather back up against the ropes, she pressed against her and kept her against the ropes, the referee would move in right after the two of them and seek to force the two apart and away from the ropes.

However, Yusei's words coupled with that harsh slap that came from the blonde caused Belinda's face to snap to the side and she staggered back a step, throwing her gaze back at Yusei she would try and respond back at Yusei with a harsh slap of her own! Trying to give as good as she got and then some as the young blonde would try and throw another harsh slap right at Yusei once more, looking to hit her with two slaps in total.
D.D.D
Top

Yusei was all smirks as she collided with that slap, thinking she'd rocked the girl well. She nearly kicked her lips at the sight of Belinda's expression, a long breath that was almost a shudder coming from her mouth as she moved in towards her--before that hard slap was returned! She gasped out at the feeling, stumbling back, before another slap slammed into her again!

Yusei dropped to the mat from the feeling, rubbing her cheek with one hand before quickly hooking the bottom rope with the other. "R-ref ref!! Get her back!!" She yelled out, pointing with the hand that was just rubbing st her cheek, trying to take advantage of the rules of the ropes.
Full Roster at The Lab!

Returning the slap seemed to have shocked Yusei and the second one seemed to have rocked her world! As Belinda was not gonna have any of Yusei's antics. She watched Yusei drop onto her back and rub her cheek before she grabbed at the ropes. Belinda would shrug as the referee came in between them, raising her hand up to rub her own cheek.

" You won't be able to bully me, so you better drop the cocky bitch attitude." Belinda said as she would roll her shoulders, keeping herself back for the moment as she would raise her arms. " So, we gonna wrestle or would you rather want to turn this into a catfight?" Belinda joked as she would let Yusei get the chance to get up to her feet, not that the referee was gonna let her attack if she wanted to anyway, with Yusei grabbing the ropes and all.
D.D.D
Top

Yusei waved it off more and more, given all the space that she needed from the ref and nodding her head a little at Belinda's words. "Yeah yeah shut up I know." she simply said to her, picking herself up and dusting herself off a little.

She let out a deep breath, nodding her head again, going to get her arms up as if she was readying herself before suddenly moving in, trying to give her a quick poke in her eye! She was trying to distract her enough so she could wrap her arms around her and toss her with a belly to belly!
Full Roster at The Lab!