Please note his eye color is different and his build is a bit thick/chubby. Finding an anime male who wasn't thin, buff or outright obese is friggin' impossible but this picture otherwise is spot on 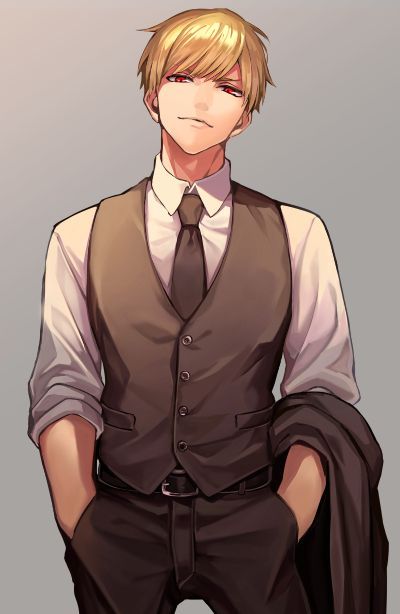 Background: Benny grew up in Vancouver and his seemingly average family life didn't really stand out. He was good at hockey and bobsledding but not good enough to pursue any scholarship in school. He went to college for architecture but never could get hired for the spot he wanted. To get his feet wet and hands dirty the young man worked construction. He was a very fit, hard working guy but a nasty accident left him with a horrible knee and back injury. Unsure of what to do he had a minor in business management, uploading his resume and putting his name out there. He tries to stay in shape but a moderate workout at the gym for him now leaves him sore and hurting, coupled with him not being able to go all-in due to his construction site injury. Because of this he is a bit thick. Not fat, but a tiny bit chubby. Some muscle mass from his old work is present so a mix of chubby but some power bulk is there in his 5'9'' 196b frame but he is hard the physical specimen of some of the female or male wrestlers on the roster or anything like some of the trainers at the gym whose entire job is fitness.

Benny got a reply from LAW looking for a "Entry Level Business Executive." Benny realized this was his best bet at anything, packing up and moving to Japan! He was a moderate wrestling fan, and to be honest the thought of powerful buff women, swimsuit model type women, and women of all types wrestling in a ring was a bit of a selling point although he is smart enough to respect these ladies for the athletes they are. Upon performing his duties he realized he was the boots on the ground for the brass. He got paid a decent amount, but as an entry level employee he is often overworked, wary of the crazy heels wandering the LAW facilities, something he did not fully anticipate as he was never involved in any wrestling promotion in-ring or outside the ring before this. Benny is in a spot where he has to present an armani suit wearing, BMW driving image when his salary supports a decent 1-bedroom apartment in the city and the driving of a small used car that is reliable, yet nothing fancy unlike most of the roster who are paid far better than he is.

He is aware of some wrestling names as the LAW roster is peppered with hall of famers, well known veterans and rising stars. However to really respect all the women of the ring and stay on their good side he studies the roster and break downs as if he does have to do an interview or fill in on commentary his job relies on him knowing what he is doing. A quick learner Benny has been able to do whatever is needed. Part of him loves being around the arena, gym and event sites but part of him really wants to move up in the office to a desk job.

One of his side gigs is something a bit different. While video game streamers seem to be popping up on the roster his own side gig is a channel where he specializes in cigar reviews as well as some whiskey, rum and beer reviews he does online. He has done this for a few years and used his channel to advertise LAW a bit. The linkage to LAW has gotten him some more fans, although his 25,000 subscribers is a tiny modest amount compared to the streamers Sayako Jun and Jem Holland.

If there is an autograph session, some fan event, or an organized interview it is likely that Benny will have some hand in it or be outright involved doing the dirty work himself as he is known to help set up the ring while LAW is on the road.