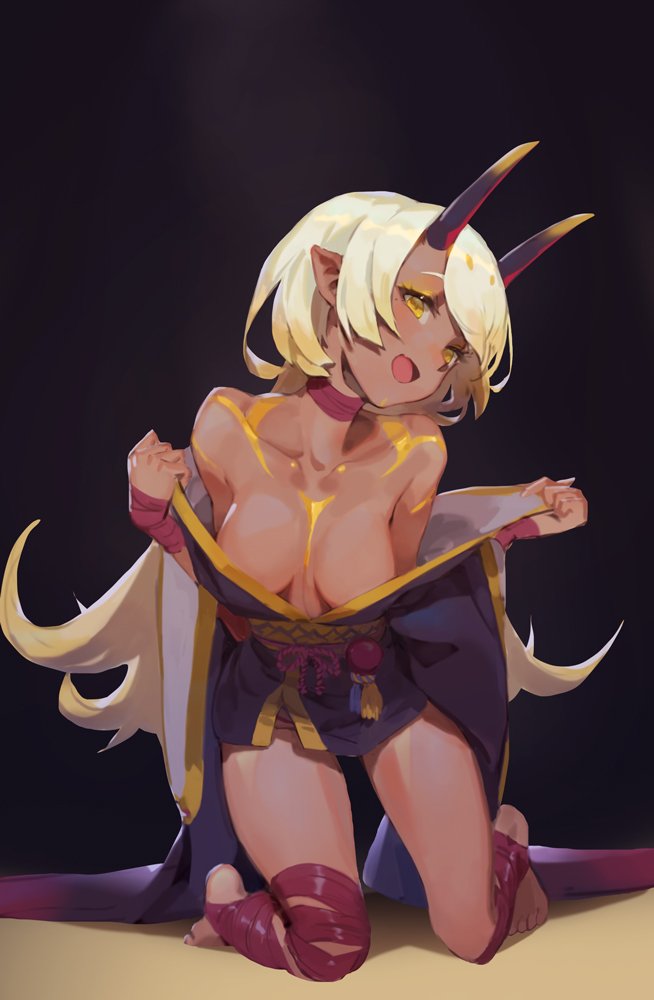 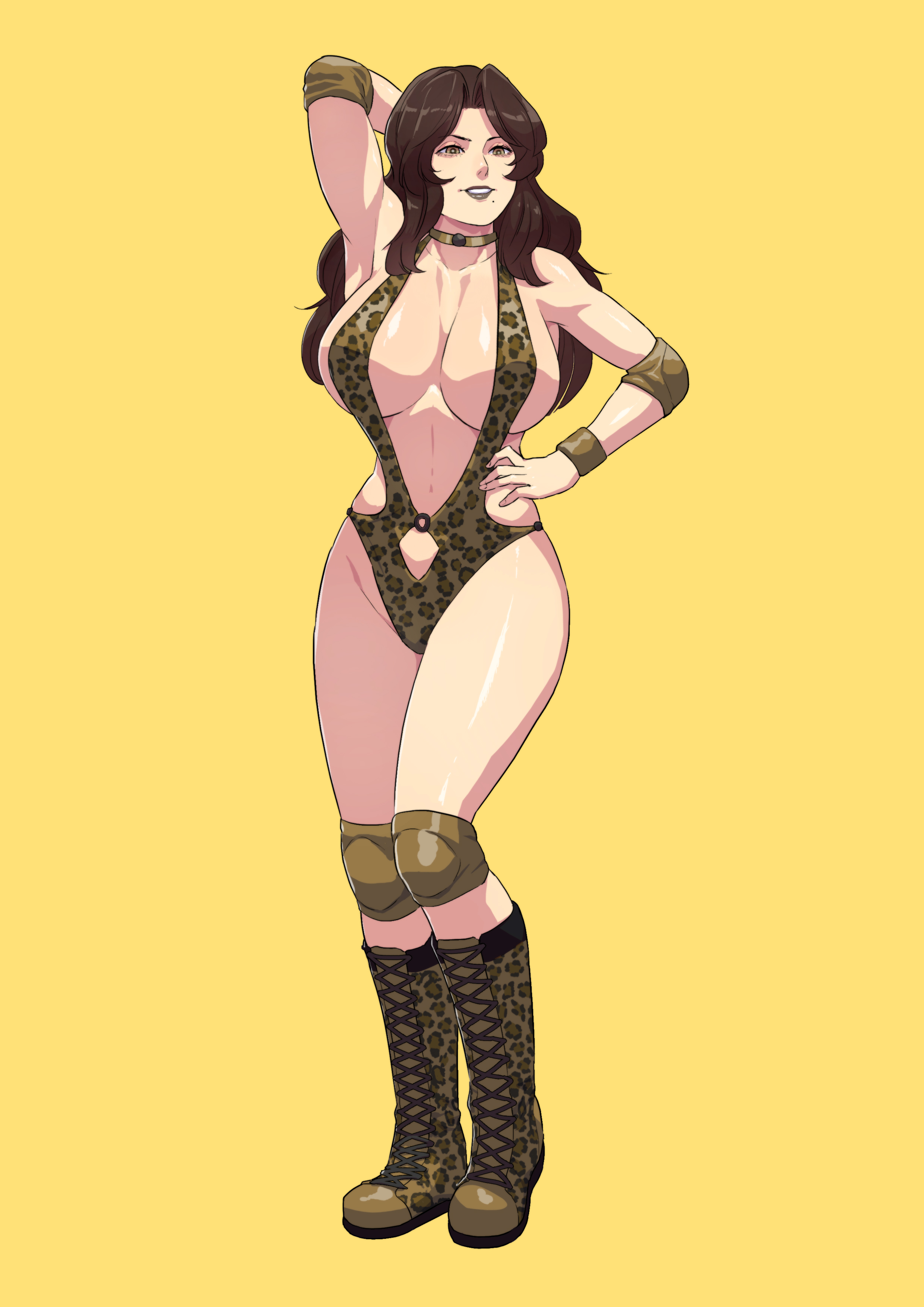 This... felt kind of nuts to be honest. Tonight was going to be a first of many for Amano.

Her first tournament entry for one. Amano had to admit, she kind of jumped on board this ship without doing much research on it. She knew it was a Hentai tournament (well, Sexfight tournament technically) that Tachibana Rei was pushing to breath some life into the division, but aside from that she didn't know much. Not about the people joining it, not about the kinds of personalities involved, very little... at least until she got the general gist of the roster. Middle and Heavyweights galore. A lot of big girls wanting to (literally) throw their weight around to try and get at that prized Sexfight Belt. And the tiny Demon was the only Lightweight among this tournament it seemed... which was a bit of a worry. Her flashback to her match with Eirina Makishima still had her gut reeling a little.

But that was in a proper wrestling match, sexfighting was a different beast.

"Ah, right." Speaking of representing, might as well do a bit of PR. So, she pulled out her phone, typing away.

Oh, but I'm showing off my new look here too, so get hype for it! Amano-Jaku is reborn!

Hope you three watch this match /real/ close. Feel free to DM me later if you wanna' act out of what I'm gonna' do to my opponent when we're alone

"Kehehe~" With that done, she turned off her phone and set out for the stage.

"From Tokyo, Japan! Weighing in at 48 kilograms and measuring at 157 centimeters! Representing Maizono Textiles, the Taishuya School of Martial Arts, AND the Lightweight Division! The Rascal Demon, Amanoooo! Jaaaakuuuuu!"

And just as the Japanese instruments and chanting of her theme blared out, Amano appeared in a fog of blackened mist, the yellow features on her outfit shining as the Demon walked out onto the stage. And true to her words, she was where and much updated look for her. Her yellow eye were shining bright against her now black scleras thanks to her new colored contact. Her long blonde hair was now tied in wild twintails that were left undyed, giving the impression of black devil horns thanks to her natural hair color. And while she wore her typical black and yellow kimono, she now had oni-shaped kneepads on for style and protection, along with bright yellow ribbons around her ankles with oni-faces on them and special black foot protectors. Still barefoot by most accounts, but just a bit of color around her feet to make them pop out a long with her. But the biggest detail of all the the mask. A small demon mask that only covered the lower end of her face. Only an entrance thing for now, but she might as well debut it here too.

The embodiment of a sexy demon fighter by Amano's account, and the crowd popped off at the sight of it. Admittedly more cheers and whistles, but that was to be expected. This was a Sexfight, not a wrestling match, and Amano was set to have her opponent wailing in pleasure throughout this match.

And once she was finally in the ring, after showing off her body to the crowd, she pulled her mask off, showing her smirking face before tossing the thing, the crowd reaching a crescendo as she took her place at her corner.

To say that Michelle was thrilled was an understatement. She finally got herself an opportunity where she could try her hands on the hentai championship, or rather, sexfight championship as the current champion would call it. Whatever its name would be, Michelle sure was excited for this, wanting to enjoy herself along the way, but also showing it to everyone why she was a championship material here. Back in the days before she joined LAW, she had won a few titles in the past, though they certainly weren't as prestigious as the ones here in LAW. This would be her chance to show off what she was made of.

So, in this tournament, Michelle would be facing a lightweight in this round, and she was looking forward to it. While she might have obvious advantages over her opponent in this round, she needed to remind herself to never underestimate her opponent, even if she was just a lightweight. After all, she did lose to people lighter and smaller than her in the past, and she would rather avoid such a thing here in LAW.

Michelle waited for her cue as her opponent made her entrance first. Soon, when it was her turn, the British seductress took one last check-up on herself. She was wearing a rather skimpy wrestling outfit which covered so little and showed quite a lot of skin. Now that it was her turn to make her entrance, Michelle walked out to the ramp as her music was played. She sported a seductive smile as the crowd cheered for the sexy seductress, and she would make sure to show herself off to the audience, making sure that she would catch everyone's attention with her sensual appearance. Shaking her hips and giving extra prominence to her breasts, Michelle walked down the ramp, giving bewitching smile to those who were in the arena.
Soon, she arrived at the ring, and after entering the squared circle, Michelle took a good look at her opponent. How cute, she thought to herself. She even got this demon motif on her, making her more endearing. Though from what she had seen of her so far, she wasn't one to be underestimated. After all, hentai match or not, this would still be a wrestling match between two wrestlers. Even so, as she waited for the match to begin, Michelle smiled at Amano, imagining the things that she would do to this cute thing. As she did so, she folded her arms under her ample breasts, pushing them up, giving them more prominence and emphasis as she waited for this match to begin.
PrinceArjuna's Roster
Top

Amano had to admit, her opponent was definitely a sexy one. A bright and showy outfit, nice breasts, and a mature look that put even her Bewitching Warrior to shame. There was little left to the imagination, the woman's outfit was just barely hiding the essential bits as if tempting Amano to peel it off and see the rest of her. And the saunter and swagger she walked with not only got the crowd edge with lustful fervor, but Amano as well. It was... so tempting to just let lust take over and tackle the woman as she entered. But Amano stayed in her corner, only eyeing the woman up.

And there was no denying it, this was a bigger fighter alright. The height different around the same as when she fought Skylar, but this woman was built a lot thicker. And as the two met eyes her opponent actually looked happy to see Amano. Whether it was because of the things to come during the match, she found the Demon her type, or she thought Amano would be an easy win the Demon didn't know, but getting the chance to rub herself over that woman would be... a treat.

She smiled back at the woman, grinning with lustful eyes as she took a step leaning forward. She didn't have the assets of her opponent to show off, but she could do a little teasing. So, as she showed both her opponent and the crowd her wrapped chest underneath her kimono took a quick hand and started to strip off the wrappings underneath. It was a quick process, as she didn't use as much cloth this time around, but in a swift motion she had a line of thin cloth in her hand and her bare breast showing off to the crowd, her nipples tantalizingly hidden under the folds of her kimono as the crowd roared its approval.

She only gave her opponent a teasing smirk before dropping the cloth. She wasn't going to be outdone, even if she didn't have the assets or body of a temptress, she'd make sure her opponent realized she wasn't some chaste Lightweight being thrown at a lion. And just to poke the bear-

"Bleeeh~" She stuck her tongue, teasing the woman to try and do something about her mini strip show.
The Wildcards (Characters) | The Lightbulbs (Requests)
Top
Post Reply
4 posts • Page 1 of 1