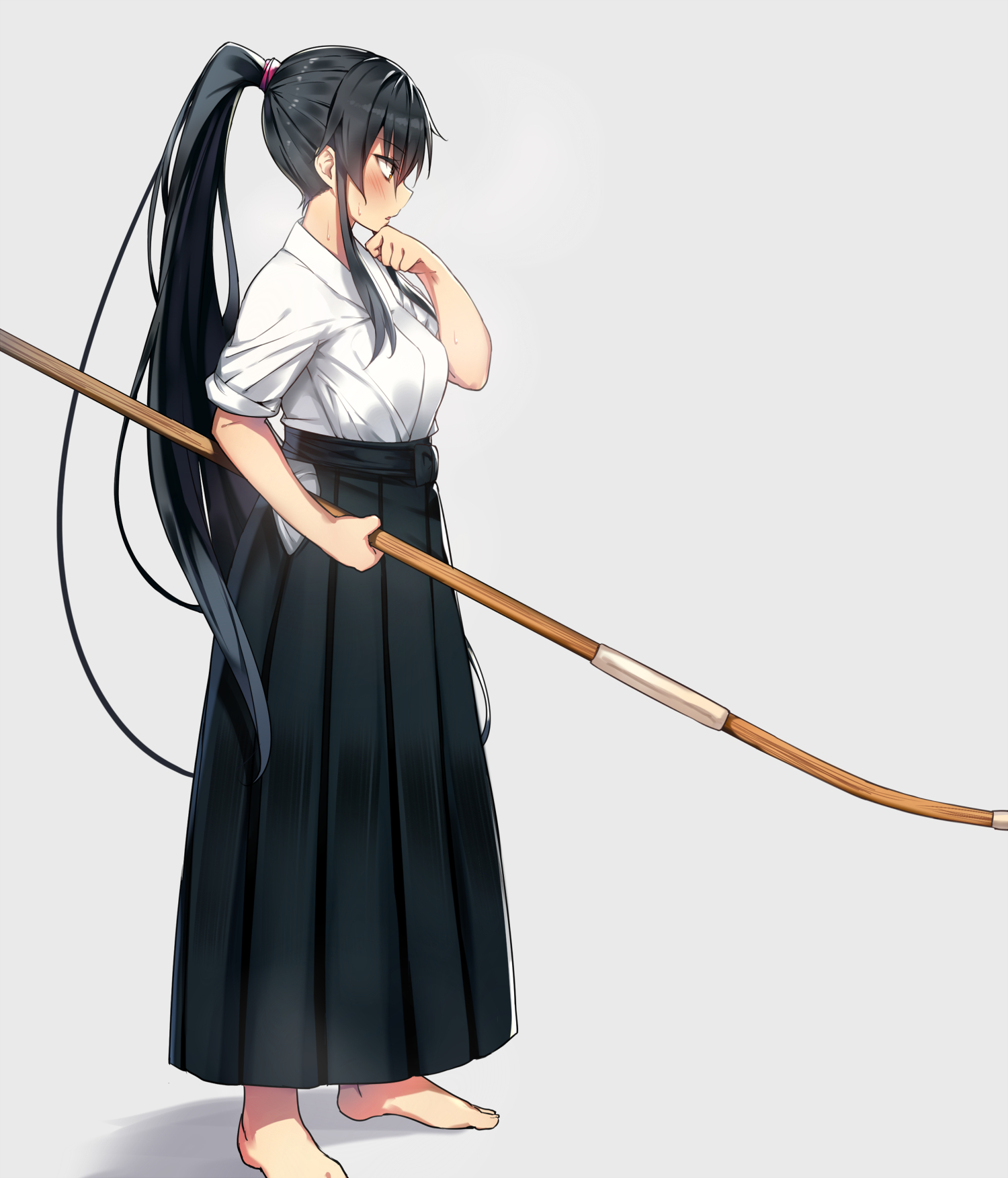 Fighting Style:
While she is not known for her blunt power, Yahagi has deceptive strength hidden behind her frame that allows her to add extra firepower to fast attacks. She is intensely disciplined and emphasizes speed and tenacity. She is known for dashing up close to opponents or even rolling for quick takedowns and leg sweeps, often transitioning into lock-ups, submissions. Yahagi is not afraid of quickly moving into over the shoulder tosses and quick power slams, using her opponent's weight to seemingly throw off her momentum when in reality she's powering them into the ground. She will not hesitate to go for body pins either; her tight abs are perfect for taking blows.

"Iron Brig" - This submission can be done as either a direct attack or a counter but it is devastating either way. Standing directly in front of an opponent with their fronts all but touching, Yahagi moves one foot between her opponent's and hooks the back of it against their leg. Her other leg kicks the opponent's opposing foot and forces her into a split. After the fall, she uses the captures an arm to use as a crank against the back of her opponent's head, hugging around them to leave them in a deadly vise-grip while their other arm is held by the wrist. The opponent's upper arms and head are bent against her shoulder while they are forcefully folded up.

"Body Knot" - A move she thought of with from a friend who used it on her ( ). It's a variant of this submission where Yahagi's legs this time knot around the other leg (free in that image) and cross it over the other leg, sliding her locked legs up the captured leg until it's at once binding and crushing her opponent's legs together. She then uses this turning point to move her body over her opponent, ensuring their abs are touching together and twisting her opponent's right arm under their own head, holding it from the wrist. She essentially twists up her opponents while simultaneously rubbing her body diagonally over theirs, making the smallest pleasure come with great pain.

"Rolling Cannon" - One of the most popular wrestling moves from her old league, it is also one of the most demanding. Yahagi piggybacks her opponent or otherwise clambers atop their shoulders, usually throwing out her hand to wave, before falling forwards. However, she hugs onto them and hooks her legs under their arms into a rolling motion. During which she tucks her feet in against her opponent's back or stomach. After a roll or two, she kicks out and sends them flying with explosive impact. This attack is easier to do to heavyweights due to them being able to withstand her weight more easily.

Yahagi is a chippy but highly focused young woman known for her bravery willingness to tackle great challenges. She's used to being a center of attention yet still holds onto both friends and family close. Yahagi puts on a brave, graceful face in public. She dislikes infighting and dishonesty, preferring to be direct and clear, but has started to grow a bit of a teasing side to herself. She's sympathetic to others who struggle, especially in her age and weight range, but is used to having older friends to her previous federation's tendency towards heavyweight wrestlers. She isn't averse to hitting on and flirting in the ring but prefers to have fun rather than to make serious commitments. She is quietly very proud of both her body and wrestling history.

Yahagi was a recent college graduate studying in the ways of the sword. Yahagi would work tirelessly in the dojo honing her skills. Finding fun in having battles with other skilled swordsmen. Though she would find that the battles would be too restricting with the cumbersome rules in place. Hoping to hone her skills and body further Yahagi would decide to take up combat sports. While working out a gym, she would make friends with an ex Japanese Maritime Self Defence Force from whom she would learn about the so-called Kantai league. Yahagi would learn that the Kantai league is an underground wrestling club in her seaside city that catered to a wide variety of combatants. Be it ex-military, professional fighters, etc. Yahagi learned fast, eager for action with all kinds of opponents. She quickly became a popular figure and firebrand to some, defying the ingrained hierarchy of the club. While she was not the largest or most powerful woman there, her relatively smaller frame belied her impressive strength but not her technically competent, aggressive style. However, LAW promoters poached the league and essentially sucked away its best wrestlers; of them, Yahagi was one of the first that was acquired.

Roughly looking to be in her late teens to early/mid-twenties, highly athletic with very little to no body fat. Her musculature is evenly distributed along her body and is sleek and sharp, possessing just enough bumpiness to look rugged yet smoothed out and carefully sculpted as to be artistic. Her legs are very lean and her arms look smooth if reasonably built but her biceps are roughly Tenryuu's size if wider and heavier looking. Yahagi has fairly large breasts for a light cruiser but prefers to wear a tighter bra to hide their smooth, raindrop shape. She has very "neat" abs that ripple with power when flexed but retain a very smooth shape. Notably, she possesses a small tattoo of a sakura blossom flag design on her lower back.


While she is a youthful middleweight, Yahagi is at a level of fitness normally reserved for older women in the professional athlete field. She seems skinny at a distance but up close reveals a tightly toned frame. Her musculature is incredibly well defined and slightly bumpy or "rocky" as some might call it but she is akin to a jaguar or a knife; sharply defined and sleek but in a strong and compact frame. While her abs are not large they are enviously sleek and her legs have visible lines of strength and tension that run across them.