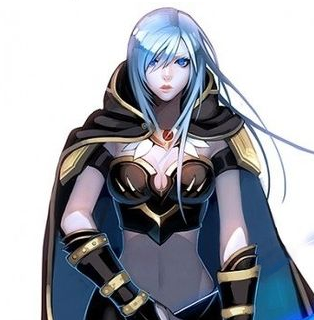 Appearance
The Baroness is a beauty to behold, something she is very aware of but something she only flaunts when in the LAW. Her French accent only compliments her beautiful appearance. During her time in the public eye, the Baroness often dresses like a unique noble. She often wears cloaks and unusually tailored outfits to make herself look like royalty.
A farcry from home, when in matches for the LAW or behind closed doors in her private quarters, that image is cast aside. The Baroness wears next to nothing, often clad in bikini like attire, sometimes but not often, wearing little more than a bathrobe like top that ends at her hips. The Baroness is obsessed with her own legs, and always keeps them bare when ready to fight.

Personality
Selfish, cold and calculating. The Baroness has little time for anything other than her own whims and desires. Her time in the FAW is when she cuts loose from the uptight royal like image and reveals her true dark and twisted nature. Stéphanie likes to inflict pain upon others, and gains a lot of enjoyment and pleasure from it. Her nickname Miss Squeeze comes from her unhealthy obsession with using her powerful legs to squeeze her opponents body, a move which is her endgame for most matches.

Stéphanie is also a masochist. Though she gains more enjoyment from inflicting pain, she still finds unusual satisfaction in becoming victim to excruciating submission moves. As such it is incredibly difficult to get a submission from her. To boot, the Baroness has a terrible meanstreak within her. She is often disciplined for bad behaviour, especially when she refuses to let go of an opponent after they have tapped or passed out. Stéphanie likes to get her way, and won't be told otherwise.

Strategy: The Baroness likes to bring the fight down to her level. She's not one for high flying spectacles and will often try to put a stop to any assault from her opponent and bring them in up close and personal where she can work her magic. She likes to ground her opponent's early and wear them down with submissions, but she can stand toe to toe if that fails, having an arsenal of slams and back breaker-esque moves at her disposal to help wear down her enemy.

When her opponent slowly begins to wear down and break, she moves in like a serpent, and will slowly breakdown her opponent more with vicious holds and submission moves to wear down the limbs and make them easier to bodyscissor. If she finds her opponent attractive or beautiful, she will get rather hands on with them, especially around the midriff area as she can be rather perverse.

Preferred Matches: Non- Submission matches (Likes to keep the hold on for as long as possible. Tap outs generally end her fun)

General Statistics
Endurance ★★★★★ - Given that the Baroness takes joy from pain almost as much as giving it, naturally she possesses immense fortitude. Often she will allow her opponent to strike at her whilst holding them in a submission.
Strength ★★★★(★) - Alarmingly strong for a woman of her stature, especially her legs which are even stronger still. She is even capable of lifting above her weight class, though such efforts will be taxing as the match progresses.
Speed ★★★ - The Baroness has moderate speed, but nothing she can truly boast about. Quicker opponents can potentially make a fool of her, but there are many she can also make a fool of.
Defence ★★★(★) - She is capable of great defensive techniques and could rank amongst the best in the federation, but her desire to be hurt makes her purposely open guarded. She will welcome attacks and submissions, but should the desire to end the match come to her, she will improve her game, though the damage could already be done.
Technique ★★ - There is little technique to the Baroness' fight plan. Submissions are her strength and she will try and wrap herself around her opponent. A very capable wrestler but possesses little finesse in her style.

Wrestling Statistics
Strikes ★★ - Can strike well enough but it is not a strong suit in spite of her strength. Her strikes can generally be telegraphed by quicker opponents, but when she does hit she hits decently enough. She often tends to slap or smack her opponents, doing a little better with kicks.
Submissions ★★★★★- The Baroness is amongst the best for submission holds. From leg locks, to arm bars, the Baroness excels in the art of submission and she enjoys it. Her fixation tends to make her focus on the stomach and back, often wearing her opponents midriff down for her finishing scissor hold.
Powerhouse ★★★★- The Baroness possesses quite the strength despite her slender frame, something that takes many off guard. She often uses back breaking moves to wear down her opponent, and can lift wrestlers of her own class with general ease.
Aerials - ★. Barely ever climbs a turnbuckle, but can use it should it be required, normally favouring the basics like elbow drops or body splashes.
Counters ★★★- The Baroness has fairly decent ability to counter her opponents' assault. What she lacks in technique she makes up for with sheer strength and endurance.

Signature Move
Boa Lock: Bodyscissors (without the kiss for those she takes no physical liking to)

Past
Stéphanie Renaud has had it all since she was a child. Born into wealth, she was never left wanting and got everything she ever desired. With ties to French Royalty in her blood, Stéphanie Renaud claims to be a royal herself and as such bought the title of Baroness with her seemingly endless money. Naturally France is a republic and names her as one of the Pretenders, acknowledging no royals in their state, but that does not stop Stéphanie from keeping her titles and heirs which she carries with her to every country.

Naturally for one as selfish as Stéphanie, having all the money in the world was simply not enough for her. She had a castle, her own estate, her own bank. It felt like victory had been achieved the moment she was born, and so boredom set in. She became more bitter and impatient as the years passed on, and as soon as she was of age, she began to drink wine, and take women to her bed. It was during these years that she discovered something she did take some pleasure in.

Often she found a strange impulse to wrap her legs around the female strangers she took to her home, and squeeze them. Watching them writhe as she slowly crushed them tighter and struggle was not just fascinating to her, it brought her enjoyment and quelled her boredom. Many nights she would hire beautiful companions to satisfy her unique fetish... which would eventually lead to near charges of bodily harm and large payouts when she began to go too far, injuring some of the girls.

Becoming a fighter was the next logical step, and the Baroness trained herself hard in professional wrestling style. With all the money in the world she got the best trainers and supporters, and entered the wrestling business some years prior. She was quite a force to be reckoned with on the independent circuit. Making a name for herself and using her deadly legs to force submissions and pass outs. She soon found however that she enjoyed being dominated almost as much as she desired dominating others, finding twisted enjoyment from being locked in grueling submission holds and often laughing in a twisted fashion when locked within them.

Each federation however (and there have been several), the Baroness soon found herself banned for bad behaviour and general infighting. She often found herself involved in some form of trouble making whilst in the ring, cheating to get her way and attacking referees. Her main offence was her refusal to let go of opponents after they had tapped or passed out, and more then once she had inflicted serious injury upon her opponents.

Recently made a free Wrestler again after another ban, the LAW got into contact with the peverse Baroness, giving her an offer to join their federation, so long as she can somewhat restrain and behave herself. With a smile, the Baroness accepted, looking at the massive federations beautiful roster, holding a desire to crush every one of its members with her deadly bodyscissor. The Baroness always got what she wanted..