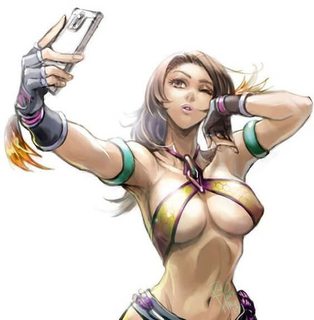 Appearance
DJ has a well sculptured figure she has fine tuned over many years even before becoming a wrestler. Her skin is tanned and often Eve will leave a good portion of her proud body exposed, mostly the midriff area which she takes pride in.

Personality
Eve is a very upbeat and charismatic individual. She is known to often be smiling even during duress. She is outgoing, confident and generally a surprisingly likable individual despite all the fame she has gained. Given her already successful career as a world renowned Disc Jockey, Eve has an alarming amount of patience for everyone and will always take time for fans, friends and family alike. Her upbeat persona can be one of her faults however, as she lacks a mean streak as it where, incapable of raging.

Eve likes to joke and jest however, and will often try and poke fun at her opponents. For better or worst she has vowed never to give up in a match... something that whilst commendable can often lead to gruelling defeats as Eve will refuse to surrender even when the match is clearly finished, passing out before verbally surrendering.

Strategy: Eve tends to try and use her unnatural endurance to her advantage, playing the long game as it were, especially against larger opponents. However she also refuses to let a match become stale for the fans, having been a crowd pleaser in her previous occupations. As such she will try and wow the crowd with occasional and unnecessarily risky moves. Such techniques can be a double edged blade, as when she hits a big move it is devastating... but the risk can equally leave her exposed to an attack.

General Statistics
Endurance ★★★★★ - Despite a having a slender build, Eve holds unnatural and near frightening endurance, able to take extreme punishment.
Strength ★★(★) - Physically is easily overpowered in tests of strength, but can hit decently with explosive strength from strikes and quick lifts.
Speed ★★★★ - Speed is a strength of Eve's, able to move quick and pull off a series of moves. Combined with her endurance she can seemingly keep on an assault against her opponent.
Defence ★ - Whilst she won't purposely let herself be hit, her full on attack strategy and risky approaches leaves her with little defence. It's often not too difficult to launch a counter attack against her onslaught.
Technique ★★★★ - Eve likes to put on a show for the watching crowds, and as such will go out of her way to be flashy to impress the audience and those watching at home.

Wrestling Statistics
Strikes ★★★★ - Tends to use a lot of flashy strikes and will use them to set up for her Ariel game. Often uses kicks more then punches and always moves to impress.
Submissions ★★- Eve can lock in basic submission holds against her enemies but is not a real specialist and prefers all out attack. However she is capable of submitting her opponent.
Powerhouse ★★- Can suplex and slam with momentum on her side, but otherwise lacks any real powerhouse moves.
Aerials - ★★★★★. Focuses mostly on high flying moves every chance she gets, be it from the turnbuckle or the ropes, or any form of high ground.
Counters ★★- Her speed and techniques offer a little counter ability such as escaping some moves with a quick slam, but generally struggles to escape submission holds.


Past
Born in the United Kingdom to the Noble Summers Family, Eve had a very strict upbringing and was sent to high class schools. She was expected to have a certain look and possess specific mannerisms, though deep down Evelyn Summers wanted nothing more than to break free from such boredoms and live her own life how she desired. When she was 16, with school finished and all of her education behind her, Eve broke away from her family instead of perusing a mundane political career they had in store for her.

Instead Eve went into gaming and became a successful online and tournament gamer in the MOBA and fighting game communities. Excelling at gaming and winning all the tournaments at least once, Eve then decided to go into modelling, knowing true well she was a beautiful woman by the age of 18 and in defiance of what her family had in store for her. When she turned 20 Eve then moved onto the music scene, looking to chase the sun around the world by becoming a DJ, something she excelled at.

For 2 years Eve was high on the scene, a farcry of the girl her family wanted her to be as she often wore little more than pants and a sports bra, showing off her body to the world and often walking barefoot wherever she went. Eve Summers became a household name, often present at large DJin'g events and festivals, releasing successful hits of her own. Eve may have continued on this path had it not been for one faithful night when two men tried to kidnap her after a concert.

Though already trained in self defence, Eve was brutally attacked by two large men who looked to capture and sell her off for ransom. Though she was beaten down, Eve managed to turn the tide of the fight, surprised by her own ability to endure such torture, and defeated both of the assailants who were later charged and thrown in prison. Eve thoughts after the whole affair that she should have been traumatised, but instead it awakened something within her.

Eve recovered alarmingly quickly and didn't show much signs of damage despite the attack, with both men otherwise having serious injuries. Despite the fear at the time, Eve had felt adrenaline an excitement, as well as an uplifting feeling she could not describe when both men were defeated. Eve wanted more, and she knew what the next step in her career would be, especially after she received contact from the LAW who wanted to have a look at her. Eve did not hesitate to contact LAW back... and the rest would become history.