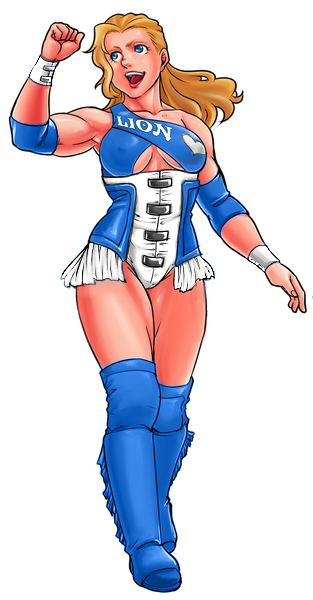 (Xalex made the following pictures and did an awesome job!) 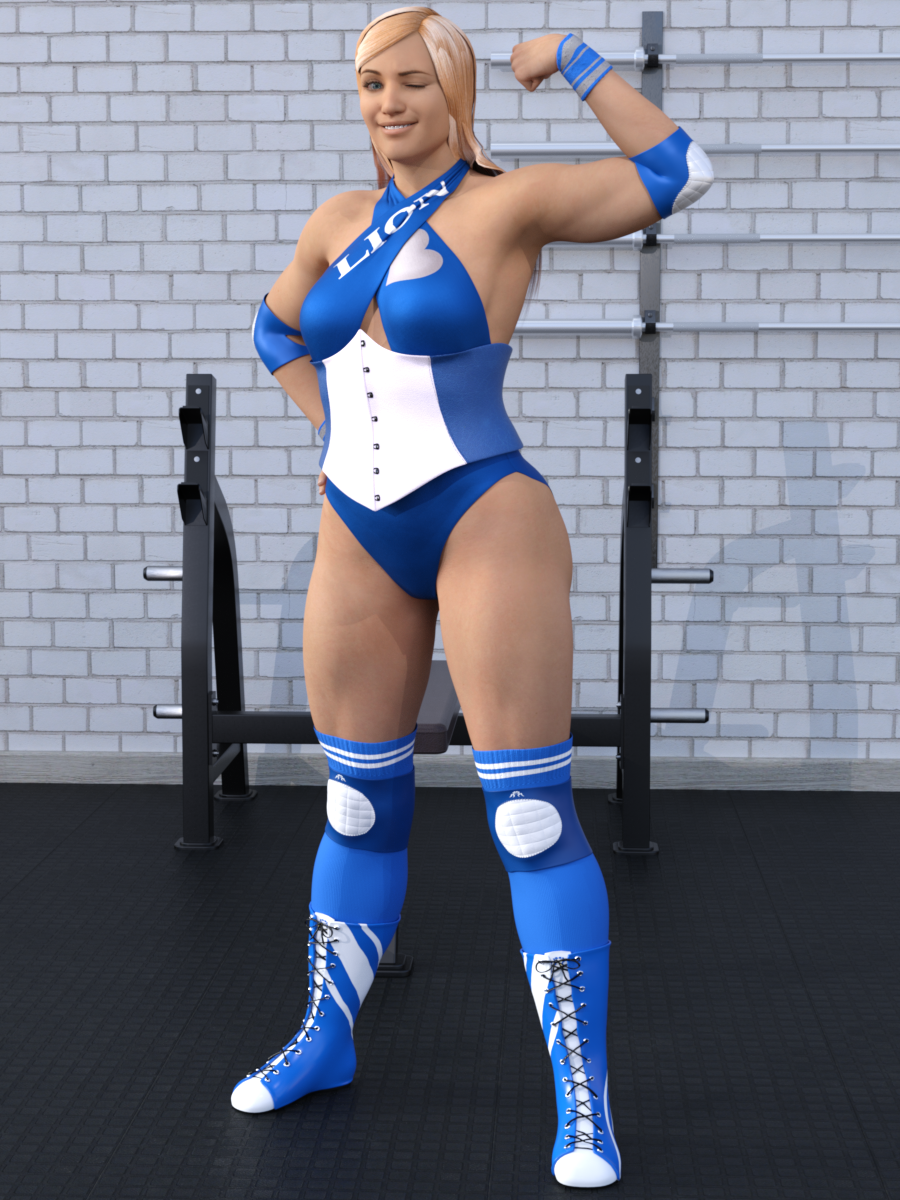 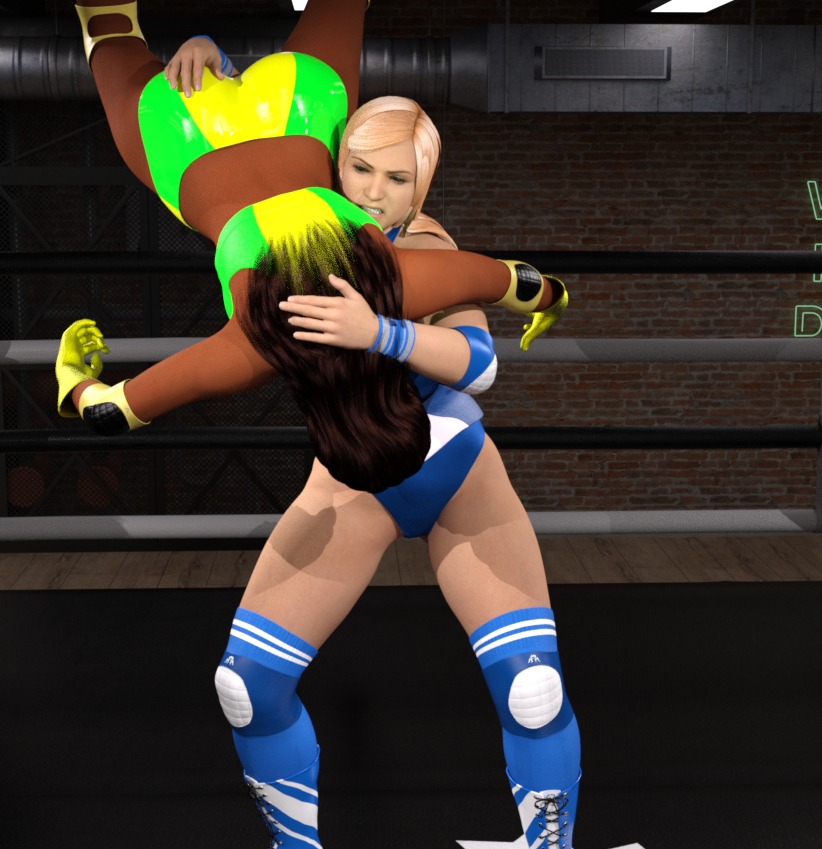 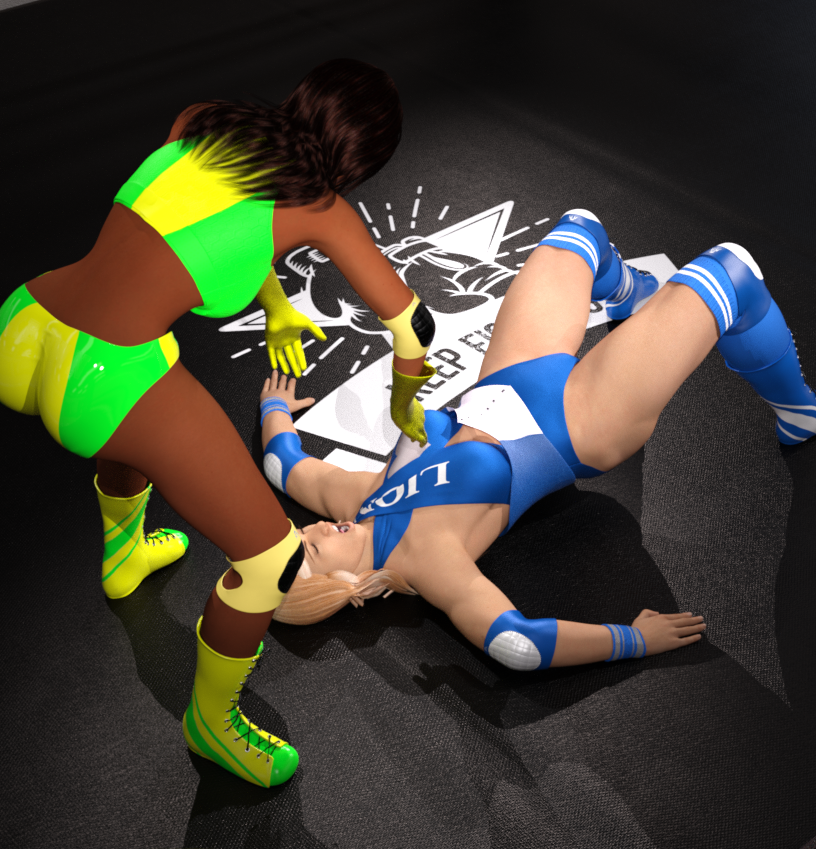 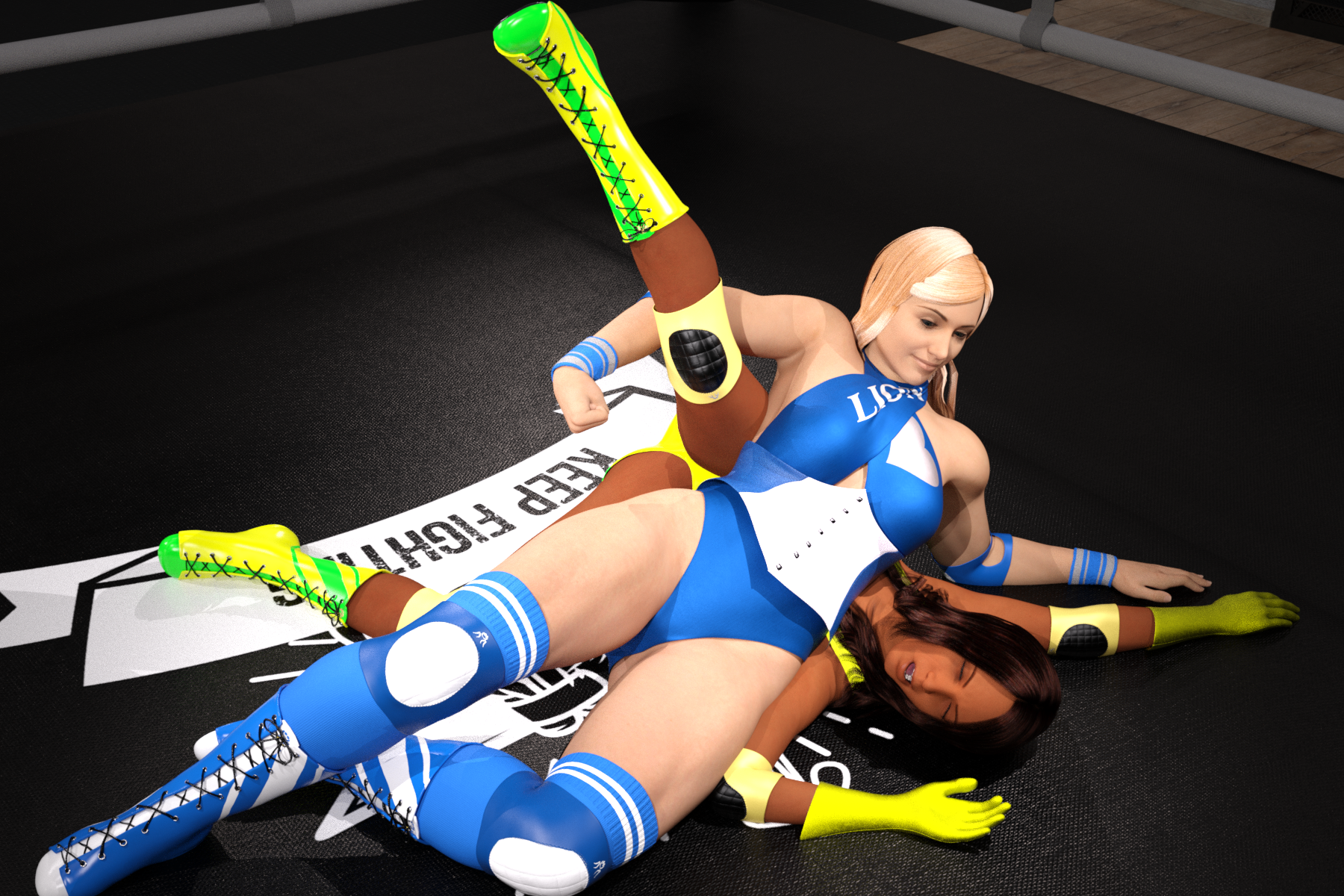 Attire/Fitness: One piece swimsuit, boots, elbow pads in a mix of blue and white as pictured above. Her arms are fairly impressive and powerful, and her abdomen isn't a gut, but isn't a 6 pack... a slight belly is the best way to describe it. Her thighs and backside have some bounce and shake to them when she does even simple things like walk to the ring. The dreaded cellulite lumps have largely been worked away, but a few are still there upon closer inspection.

Personality: Lauren is very bubbly and cheerful despite never really having been dealt a good hand in life. She knows she is a very old rookie, and tends to like working with other rookies who are younger, often acting as something of an older sister or mother figure. Lauren knows she isn't the most talented or physically gifted, and tries her best to work hard. She is much more gritty than people expect a flubbery lady in her 30's to be.

History: Lauren grew up in Ohio outside Cleveland. She got along well enough with her parents and sister Mary. Lauren did all right in school, but not well enough to get into college. Being from a lower income family, it was essentially an accepted part of life that after high school graduation you work at whatever wage job you can. For Lauren, that meant being a waitress. Her personality led to good tip money but she just never made much money. Lauren however was a bigger woman than most and grew up loving wrestling. In her mind Wendi Richter was the queen icon of the 1980's. Lauren loved her power and ability to just pick women up and slam them around before she put them down for a pin.

As luck would have it, Lauren one day on a whim bought tickets to a small local wrestling promotion four years ago. The promotion was a very small one, and their women's champion offered a shot at her title for any challengers in the audience who wanted to step up and take the shot. Lauren figured she was a lot bigger and may put up some fight. She came out in old white wrestling boots and a black one piece swimsuit. At 5'7'' and 171 lbs Lauren had surprisingly muscular arms, her belly was not defined but didn't bulge out to much, but her thighs and backside drew quite a bit of unwanted attention from the crowd, dubbing her "jigglypuff" due to the quaking flubber. After a surprisingly long battle in which Lauren pulled off a good deal of basic moves she saw as a kid, Lauren did end up losing to the woman but the promotion offered to let her wrestle there. Because they could only offer a few dollars per match Lauren agreed to wrestle part time and keep her day job as a waitress at her diner. For the past four years Lauren began her part time wrestling and training as a waitress by day, and "big slammin' sister" by night. She earned some extra cash but found that she really loved wrestling a lot. Scooping women up and slamming them down before jumping on top for a pin was just a nice thrill for her. Then, after working at a small gym for a couple years and being the local champ she was noticed by a LAW scout who was in Cleveland leaving town, when their car happened to break down. They caught Lauren defending her belt in a triple threat match, pinning both her opponents at the same time. The scout saw her as a longshot, a project who may not amount to much, but her magnetic personality tipped them over the fence and led to her first actual big-time contract. Sure it is damn near the LAW minimum but she makes more in one year now than she ever had before. Taking a leap of faith, the 35 year old rookie to the big times finds herself in Japan, ready for action! After wrestling a few preliminary dark matches she found that the crowds here are way more polite, but a young 19 year old 120 something pound opponent brought an old nickname back by calling Lauren "jigglypuffu." After being tossed around in a close match, Lauren got the last laugh by screaming "bodyslam" at the woman as she delivered her finisher for the win.

Since joining LAW Lauren has been told by management that she has not lived up to a certain in-ring standard... AKA by being older and less fit she lacks the sex appeal or wider marketability of younger women thus her losses in the ring are unacceptable. After a few harsh loses she was set up by Jem Holland for a humiliating match in which Jem defeated Lauren and the fans were totally against the big woman. Lauren had enough at that point and decided that if she had to bend the rules a bit to win and keep her contract then so be it.

Wrestling Style: Powerful slams and strikes. Lauren has a solid, basic foundation for a movies but doesn't do much fancy. Her speed is average and she will once in a while surprise women with a springboard elbow drop or leg drop to show off.

Fun Facts:
-Lauren will at fan functions see the backstage crew working and revert to her waitress days, handing out food and drinks.
-Lauren used to be ashamed of nicknames that poked fun at her flabby legs and bouncy butt, but now she sees them as a sort of badge of pride.
-She is a bit age conscious, having wrestled part time in a rinky-dink promotion for almost 4 years did lead to some experience, she is essentially new to the big time and a rookie older than many women are when they retire from wrestling.